Endurance and Rediscovery: The Royal Ballet of Cambodia 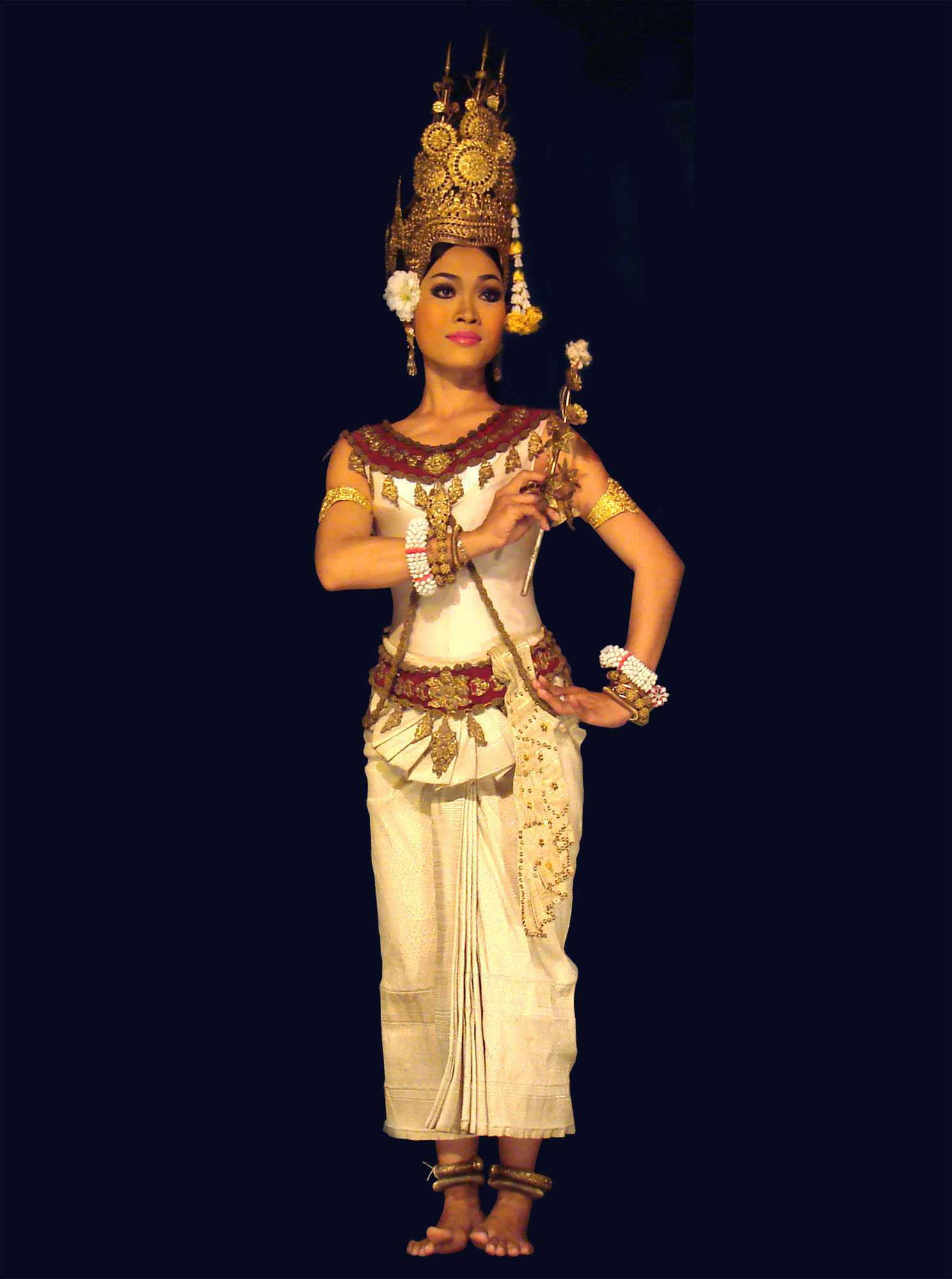 Gilded costumes require extra hours of preparation. Some even have to be sewn directly onto the dancer. Photo by Jean-Pierre Dalbéra. cc

The stage is backlit with a warm yellow glow. The musicians sit cross-legged in rows on either side, playing xylophones, drums, gongs, and finger cymbals. The voices of a woman and a man intertwine as they swoop in and out of nasal tones and between notes that are unfamiliar to the Western ear. From stage left, a line of women enters the scene in slow motion. They articulate every movement as the heel and then the ball of the foot rises from the ground and floats, dynamically flexed, to a new position. Their hands are flexed, the fingers twisting back toward the wrist in a beautiful, norm-defying curve.

The dancers’ slow movements are entrancing. The women arrive at center stage and gracefully lower themselves to their knees. In unison they slide one knee along the floor toward the back, the leg bent at ninety degrees and the foot flexed with toes bent toward the floor, leaving the other knee in front for support. Their backs are arched, and they watch with calm concentration as their curled fingers paint undulant brushstrokes in the air before them. Now they pull the back leg forward as they twist to the right to paint the next side of the stage. This is Tehum Poh, the welcome dance.

Anciently, this type of performance was reserved for the royal courts of Cambodia, where it accompanied coronations, marriages, and funerals. Eventually the dancers of the Royal Ballet of Cambodia began to perform internationally, starting with the 1906 Colonial Exposition in France. The Ballet performed in Europe periodically until political unrest devastated the country in 1975. In April of that year, a violent, radical group called the Khmer Rouge took over Cambodia. In an effort to transform the country into a perfectly equal communist state, the Khmer Rouge abolished classes, money, religion, traditional Khmer culture, and even basic human rights. People associated with the arts were labeled “anti-revolutionary,” and approximately 90 percent of them were killed. Because classical Khmer dance had been passed on orally from artist to artist up to that point, and because the already scarce documentation of the art form had mostly been destroyed during the genocide, the artists’ deaths were devastating to Cambodian culture.

The few dancers who survived were eager to reconstruct the traditional repertory. Notable among them was Her Royal Highness the Princess Norodom Buppha Devi, a gifted lifelong student of Khmer classical dance. As soon as the Khmer Rouge was ousted in 1979, Princess Buppha Devi devoted herself to reestablishing the Royal Ballet. She reunited with the few dancers who had survived and has been working ever since to recreate forgotten choreography, protect the Ballet from extinction, and share its work with the world. In 2008, UNESCO inscribed the Royal Ballet on its Representative List of the Intangible Cultural Heritage of Humanity, ensuring that the ballet company will be permanently safeguarded by various stakeholders.

Thanks to Princess Buppha Devi, the Ballet has resumed its international tours, most recently to Mexico in October 2014 and various cities in the United States in November 2014. Its traditional repertoire is now not only complete but also expanding. “We have now reached the point where Cambodia no longer is losing more of its cultural heritage,” Delphine Kassem, an activist for Cambodian arts, told the Phnom Penh Post in 1999. “Now, we finally know all the traditional arts and the crafts that are connected with every genre.” Choreographers—including the Princess herself, who is now in her seventies—are even adding new dances to the collection. The Ballet’s dances, gilded costumes, and music are being preserved digitally and shared around the world. Because of dedicated dancers and the rich cultural heritage of classical Khmer dance, the Ballet has proven itself to be both resilient and timeless.