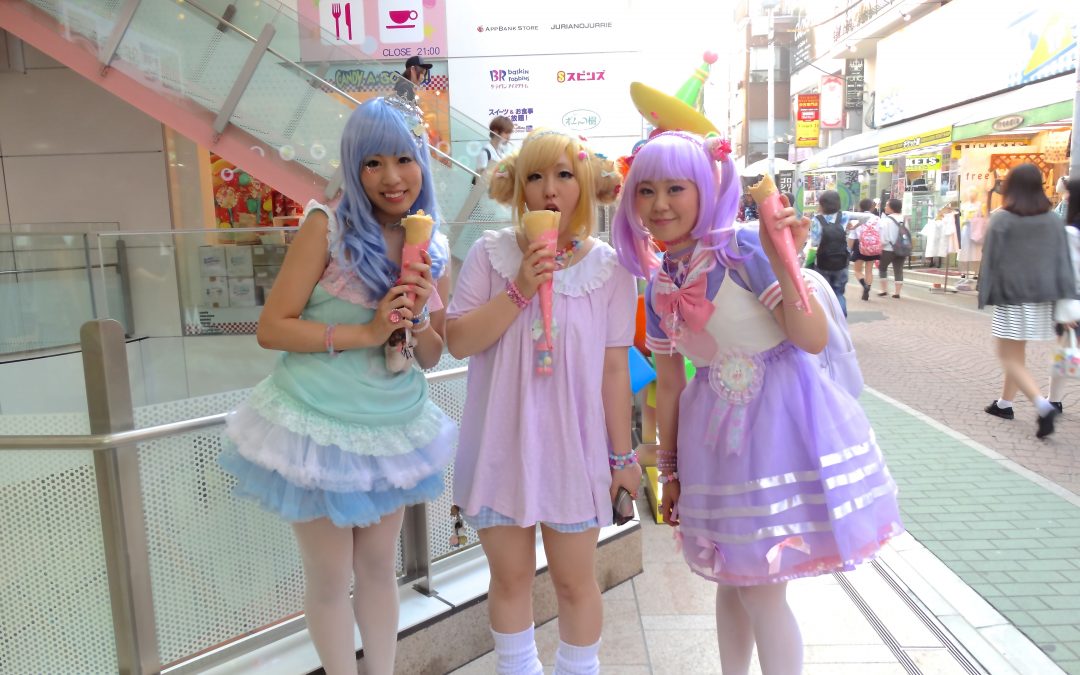 “That is so cute! But there’s no way I could do that because I’m too tall.” Or so Wyoming native Valina Eckley thought when she encountered lolita fashion in the Harajuku district of Tokyo, Japan.

Despite her initial assumption, Valina began wearing lolita. During the eight years she lived in Japan, she attained a job working for Baby the Stars Shine Bright, one of the biggest lolita brands with over thirty stores in the country. By the time she left Japan in 2011, another fashion called mori kei was rising in popularity.

Japanese street fashions, while mostly exclusive to Tokyo and a few other areas of Japan, are growing in popularity with pockets of fans worldwide. Each fashion expresses its own style, but some of them overlap in color scheme or the general outfit shape. It helps to learn the differences and similarities—after all, everyone appreciates a thoughtful compliment on their attire.

Currently, lolita is the prominent Japanese street fashion. What unites lolita is its use of frills, lace, and numerous accessories; its emphasis on modesty; and its distinguished skirt shapes. The two most common skirt styles are a bell shape, called a “cupcake” shape, and an A-line shape. Beyond these unifying factors, lolita has many subsets, each of which has its own name and look.

Classic lolita emphasizes the Victorian, Regency, and Rococco roots of the fashion, while gothic lolita is similarly elegant with darker colors and motif accessories like crosses. Sweet lolita showcases outfits with cute themes like sweets, fruit, animals, toys, and pastel colors. Other lolita subsets derive from the use of specific colors, such as kuro (black) lolita and shiro (white) lolita. While lolita initially drew inspiration from Victorian European fashion, most of its subsets have little resemblance to the original source.

“Lolita just made me feel super cute, and it felt good to dress up, and it made me feel powerful,” says Valina. “It brings out the girly-girls in us that we didn’t know we had.”

Ouji, also called kodona or boystyle, is worn by both men and women. Photo by Victor Faretina. All rights reserved.

Often called “kodona” or “boystyle” by American fans, ouji, says enthusiast Brittany Tryon, is “like a companion style. It’s what the boyfriends of lolitas can wear.” Jessica Snyder, a wearer of both lolita and ouji from Utah, calls ouji a subset of lolita. Whether ouji is a subset of lolita or a companion style is debated. Both lolita and ouji have similar subsets, like kuro and sweet, that make the styles very compatible.

Ouji draws inspiration from young boys’ Victorian-era clothing. “Shoes or boots, knee high socks, shorts, a shirt, vest, and maybe a jacket with some sort of necktie and a hat is pretty basic for an [ouji] outfit,” Tryon affirmed.

Snyder says, “With lolita, I like the femininity, cuteness, uniqueness, innocence, and old-ish style to it, and ouji, I like the ability of being able to appeal to my more boy-ish side while still upholding everything I love about lolita.”

“I feel fairy kei is a nice mixture of decora, [another fashion with] lots of accessories, with a bit of sweet lolita, which tends to be pastel colors,” McCall Walgren said to describe fairy kei fashion. McCall owns an online shop called Kawaii Power Up Boutique, where she sells fairy kei accessories like jewelry and hair clips, and she wears fairy kei herself.

Fairy kei began as a unique style created by the owners of SPANK!, a secondhand shop located in Tokyo. The fashion relies on pastel colors. McCall also says fairy kei includes themed accessories such as “sweets, wings, hearts, stars and items inspired by the 80’s, like Care Bears and My Little Pony.” Fluffy miniskirts with leg warmers or oversized sweaters are popular, but longer skirts or pastel shorts aren’t unheard of, either.

McCall delved into fairy kei after discovering it through lolita, and when comparing both fashions, she says, “I feel like there is more freedom with fairy kei [than lolita] as long as you stay in the right color scheme.”

Mori kei is often referred to as mori girl because more women are seen wearing the fashion than men, but men do also wear the fashion with pants in place of skirts.
Photo by Vincent Tam. cc

“It’s like Japan’s version of hippies, or flower child,” mori girl Brittany Wilson of Orem, Utah said to describe mori kei. “It’s kind of a rebellion against technology and a desire to go back to simpler times.”

Mori kei fans wear earth tones, like browns and greens, and emphasize their connection with nature through their accessories. Cardigans and scarves are commonly paired with leggings over flowing skirts and dresses. Footwear consists of boots, sandals or flats, but never high heels. The point of mori kei, Wilson emphasizes, is to dress in a way that is harmonious with nature and suitable for living in the woods.

“I’ve always been kind of an ‘earth child’, and I always loved being out in the woods,” Wilson reminisces. “[Mori kei] appealed to that part of me.”

“Some people like to make rules, but in fashion, are there really rules?” Valina Eckley asks. With lolita, she says, “there’s a general image that we shoot for, but some people tend to put up really strict rules.” This applies to all Japanese street fashions, not just lolita. Valina advises for those who wish to try one of these street fashions, “In the end you just have to do something for yourself.”

Top image: Fairy kei stands out from other fashions with its use of pastel colors and numerous accessories.
Photo by Kendall’s Photos. cc