The Best of Berlin 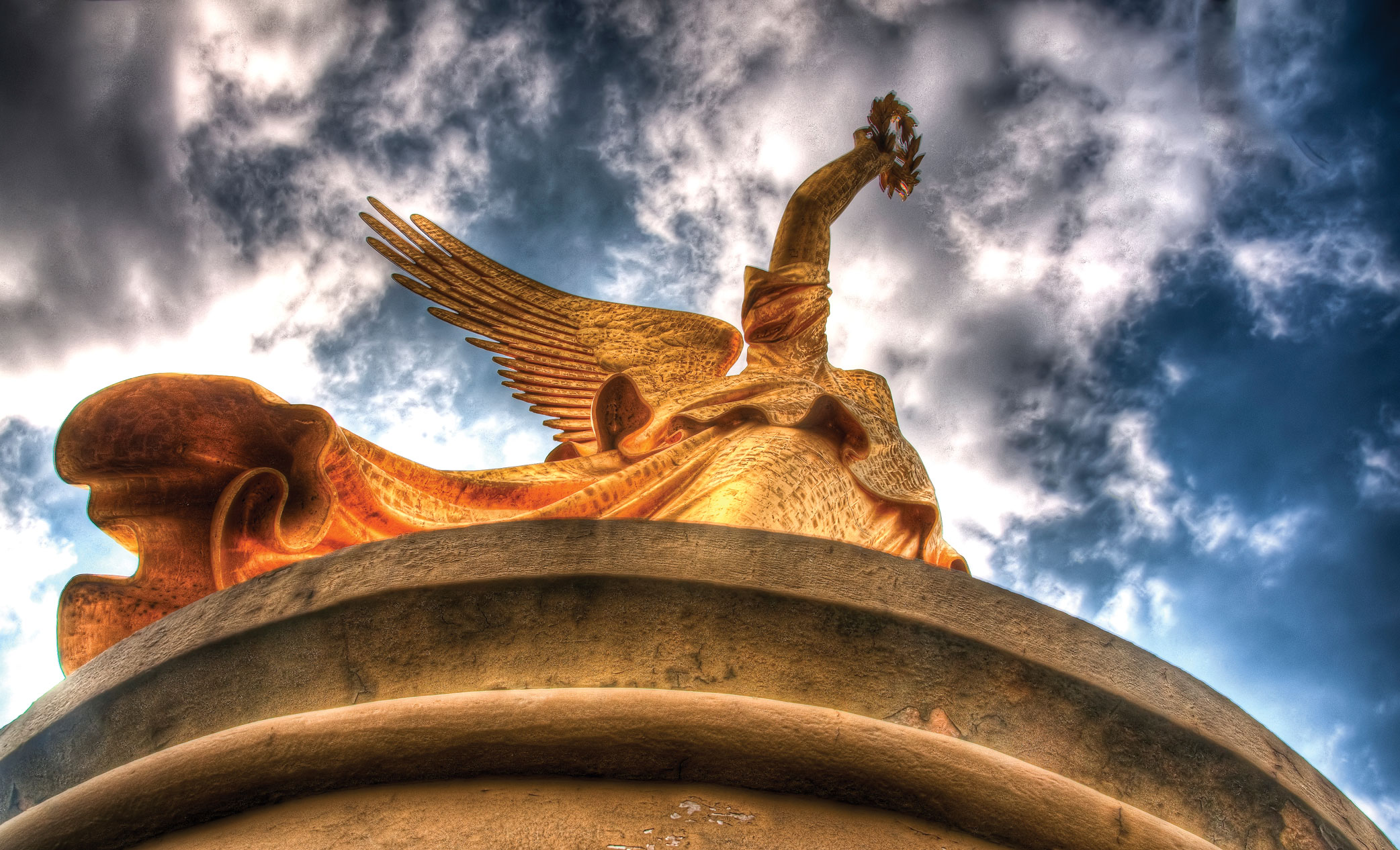 “What’s your favorite city in Europe?”

That was the question I asked almost every local I came in contact with while traveling around Europe. And I kept getting the same answer: Berlin.

The funny thing was most couldn’t really explain why they loved the city.

So I set off for Berlin, determined to figure out what made it so special.

I launched myself like a juggernaut all over the city, riffling through museums, sizing up graffiti, and experiencing the city’s famous Turkish kebab for myself. But nothing I saw or experienced quite explained Berlin’s attraction.

My last night in Berlin, I watched a movie being projected on a sleek modern building downtown. The film, a documentary about the Berlin Wall, showed footage of a crowd chanting and cheering as bulldozers tore down the hunk of cement that had divided the city for so long.

I looked over and realized tears were streaming down my friend’s face. Suddenly I understood what drew people to the city: Berlin is free. The city has the feeling of a bird let out of its cage, finally free to soar.

Berliners knew oppression, knew what it felt like for their homes and families to be torn apart. They’d seen severe restrictions and brutality as people died trying to escape from East Berlin to West Berlin. When the wall was torn down, the city reveled in freedom—and has done so ever since. Berliners are still riding that wave of emotion—the feeling of freedom—more than 25 years later. And the feeling is contagious. No wonder everyone loves Berlin.

To experience for yourself the freedom rippling through the bustling city of Berlin, include the following locations during your visit. By the time you leave, you’ll likely have joined the ranks of Berlin-lovers around the world.

A man at the Berlin Wall Memorial

Few places in Berlin are bursting with more of the free-at-last feeling than Checkpoint Charlie, the best-known border crossing along the Berlin Wall. (Though the original checkpoint was torn down, a replica stands in the original spot.)

The Berlin Wall was constructed in 1961 to divide Soviet-controlled East Berlin from Allied-controlled West Berlin, and Checkpoint Charlie became notorious for the number of Berliners who attempted to illegally cross the border to freedom—even though Soviet guards had orders to shoot any man, woman, or child trying to do so.

Stories of some of the many people who escaped East Berlin at or around this checkpoint can be found on the open-air display across the street and at the museum next door. Some people hid in trunks or secret compartments of cars, while others just ran for it, both in broad daylight and in the dead of night. As you read the stories, you’ll likely feel the thrill of freedom that must have coursed through those who escaped.

You’ll experience this same feeling reading the exhibit’s old newspaper headlines that shout to the world the joy of those who managed to make it across through a combination of cunning, bravery, and unbelievable luck.

You’ll also learn about the tragic tales of many who were not so lucky. Though a solemn reminder of the past, preserving the stories of victims reminds Berliners and visitors alike that freedom is not always free.

Though the majority of the Berlin Wall was torn down in 1989, you can still feel a thrill walking across the brick line zig-zagging through the city, marking where the infamous wall once stood. To see the one remaining portion of the wall, visit the East Side Gallery. Every inch of the what’s left of the wall is covered in spray-painted representations of freedom from oppression.

To show government support of the newfound freedom, German officials flew in graffiti artists from all over the world to contribute to the artistic celebration.

As you stroll through the East Side Gallery, the longest open-air gallery in the world, you’re bound to feel a fresh sense of freedom yourself. But don’t stop just yet. There’s more art—and liberty—to explore in Berlin beyond that of the graffiti style.

Under Hitler’s rule, art lived a tough life, often labeled degenerate. (And the artist involved often faced imprisonment or persecution.) Art didn’t fare much better once the Soviet Union was established. Leaders viewed art as a weapon, and thus art was to be used only by those who would promote the government’s agenda. Even a hint of criticism or un-Soviet ideals could land artists in labor camps.

But in the new climate of freedom after the collapse of the Soviet Union, museums blossomed in Berlin. In fact, the city now has over 180 museums and 400 art galleries.

Museum Island is a must-see. Located on the Spree River, Museum Island is home to five of the most famous museums in Berlin. In the Altes Museum, the birth of democracy is highlighted in the impressive collection of Roman and Greek classical antiquities. If you step inside the Alte Nationalgalerie, which was built in the style of an ancient temple, you’ll find a concentration of masterpieces from the 19th century.

The Neues Museum is an absolute must because it displays one of the most famous artifacts on the island: the ancient Egyptian bust of Queen Nefertiti. Also of interest is the Bode Museum, where you’ll get your fill of Byzantine and Numismatic art.

Whatever you do, don’t forget the Pergamon. This museum is not only the most visited museum on Museum Island but also the most popular museum in Berlin. The name Pergamon comes from the massive Pergamon Altar of Zeus, which was transported to the museum after being discovered in the ancient city of Pergamon (in modern-day Turkey). The altar is covered with friezes similar to those of the Parthenon in Athens, many depicting Greek gods locked in legendary battles.

Another Berlin museum to add to your list is the Natural History Museum, which is home to the largest dinosaur skeleton on display in the world—an astounding 45 feet tall. Then there’s also the Berlin Magic Museum, if you’re in the mood for some fun.

The Jewish Museum is a masterpiece of experimental architecture. Instead of being shocked by a collection of harrowing artifacts from the Holocaust, you are more likely to leave with memories of your experience in the museum because of its striking architecture.

The entire museum is built in an asymmetrical zigzag shape, and as you wind your way through the exhibits, there’s no way to be exactly sure where you are in the museum or what’s coming next.

The architect, Daniel Libeskind, said of his design, “What is important is the experience you get from it. The interpretation is open.” The focus of the museum, however, is on the beauty of Jewish culture and history and the Jews’ struggle to find a place in the modern world. You’ll learn about the Jews’ long fight for equal rights, which finally led to freedom from restraint and stigma, although at a brutal price.

Any real travel expert will tell you that to experience a culture, you have to try the food. Eating in Berlin, however, is more about the experience than about the food. Max Kellner, a native Berliner, says the mix of cultures is comparable to that in New York, and you can find food from all over the world. Every kind of food and all kinds of people are welcome.

One of the most common ethnic foods you’ll see is doner kebab, a gyro-like meal most often made with lamb or chicken. Turkish kebab in particular has flourished because of the large number of Turks living in the city.

For an especially good kebab, Kellner recommends trying the restaurant Mustafas Gemuese Kebab, located in the Kreuzberg area. However, be prepared to stand in line, because even the locals love the eatery’s special kebabs, which include ingredients such as feta cheese, lemon, and even french fries.

Another must-try food is currywurst, a savory sausage covered in a mouthwatering curry sauce and often served with bread. You can find the dish almost anywhere, but Kellner recommends Curry36. “As a Berlin guy, I would say it is really the best you can get.”

The wide range of variety in food choices reflects the Berliner’s willingness to try new things—sometimes simply because they are free to. And in Berlin, freedom tastes absolutely delicious.

Whatever you decide to do in Berlin, search out that feeling of freedom.  Although many of the people I talked to couldn’t put their finger on what made Berlin special, they loved it just the same. So take a walk through Berlin and see if the celebratory spirit of the city awakens anything in you. You’ll fall in love with this unique corner of Europe.