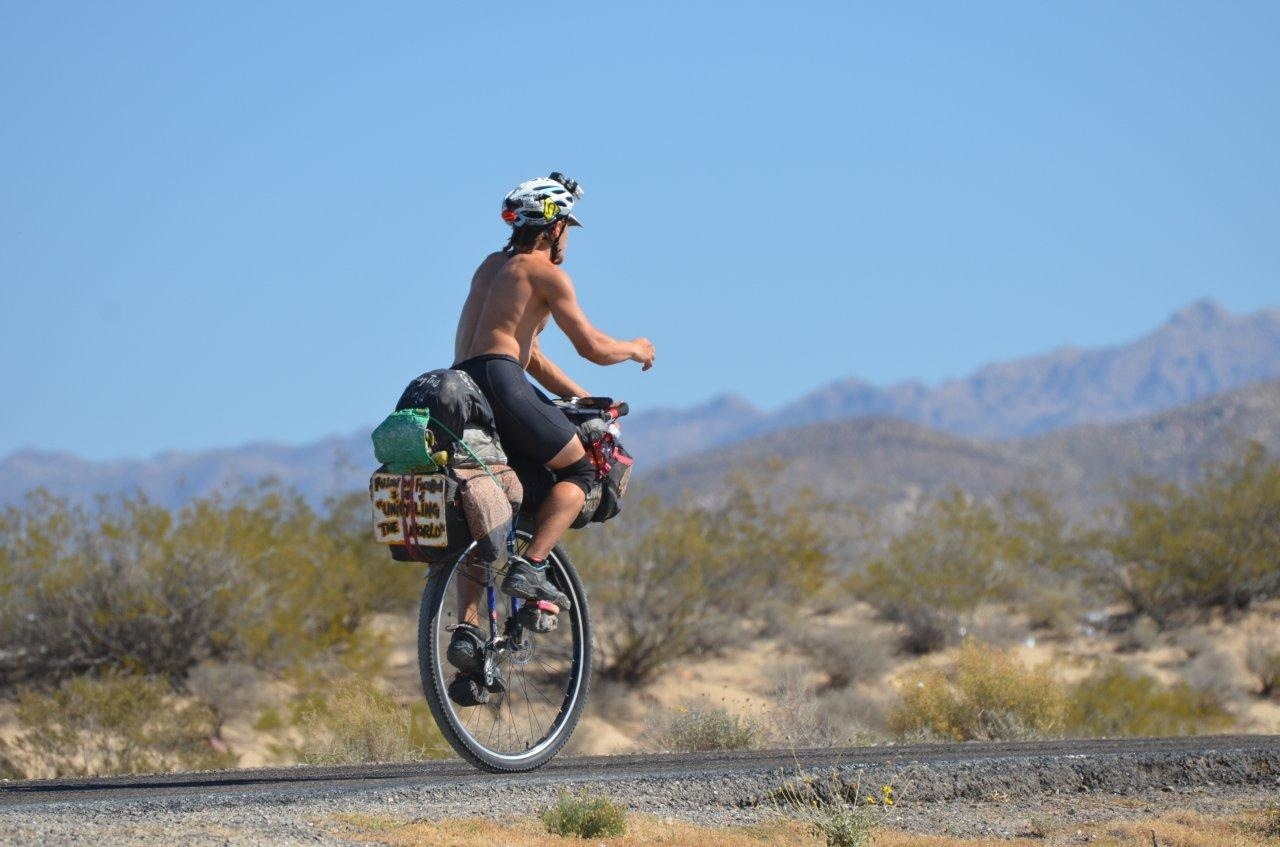 “I want to thank the person who stole my passport and valuables in Colombia, South America, three months ago today. Technically, you changed my life,” says Cary Gray, a cross-country unicyclist.

As you might suspect, Gray is not your average 25-year-old. He currently holds the world record for the longest unicycle trip, which took him across North and South America. But he’s not done—he plans to return to South America and continue riding across other continents in the future.

His motivation doesn’t come from breaking records, however—it comes from his pure love of travel. “A lot of people say, ‘Why the unicycle? You must really like unicycling.’ It’s not the unicycle; it’s the traveling I wanted to do first.”

When Gray was ten, he was given his uncle’s unicycle. Over the next few years, Gray’s interest—and skill—in unicycling grew, and he started riding the unicycle almost a mile to school every day. But he didn’t consider taking his unicycling to the next level until after graduating from college, when he decided to take a trip
to South America.

He remembers thinking, “I can take a few [airplane] flights here and there, but that’s a little bit expensive. . . . I could backpack like everyone else, but that’s pretty standard.” Next he considered going on a bike, but as he puts it, “That’s not very interesting. Why don’t I do it on a unicycle? Why don’t I do something that hasn’t been done before?

“I think most people have this moment at least once in their life where they have a thought, a crazy idea, but as soon as you think it, you can’t unthink it. . . . A lot of people don’t think of what’s possible; they only think of what’s practical. Practicality is great, but nothing creative comes from being practical all the time.”

For Gray, possible means doable. “When I was a kid, I built trebuchets, so any time I get an idea that I know is possible, I see it to the end. The only reason I had to stop building trebuchets was because the insurance company claimed them as deadly weapons.”

Even with his can-do attitude, Gray decided to test the idea of unicycling to South America by starting with a (relatively) shorter trip: Baltimore, Maryland, to St. Louis, Missouri. “I did it in 17 days and it was miserable, but I loved it, which set in motion the grand plan.”

A year later, on July 9, 2013, Gray started his journey to South America. Over the next few months, he cycled up to Canada, across the United States, and down the Baja Peninsula into Mexico. From there he made his way to Cancun, Mexico, where he “failed miserably” as a unicycle entertainer.

He then continued on to Belize, Guatemala, and Honduras, eventually unicycling to Panama. Gray crossed Panama four times in search of a boat that could take him to Colombia. “I ended up not finding a boat, but I found an English guy [Nicolas Gault] and I said, ‘Are you a sailor?’ And he said, ‘No, but I was thinking of kayaking to Colombia.’ And I said, ‘That sounds cool. I guess I am too.’”

So Gray and Gault bought a 20-foot-long wooden kayak. They spent the next three and a half weeks paddling the 150 miles to Colombia—with the unicycle inside the boat.

“I only rode about two weeks into South America. When I got into Medellin, Colombia, . . . I had to stay at a hostel. On the second night I was at the hostel, . . . someone stole [my] whole bag, with my passport, debit card, GoPro [camera], zip drives with months of data of [my] journey—basically everything, everything I needed. They stole it all.”

Stunned, Gray decided to fly home. But rather than worrying about his stolen belongings, he worried about his world record. He’d broken the previous record while cycling through Panama, but he wanted to secure the record by more than just a few miles.

Though he no longer had his passport or valuables, Gray wasn’t deterred. “Basically all the stealing of my stuff did was force me to decide something, and that’s not bad. . . . What that person did ended up putting me in a good place. I went home and saw my family [for two months]. Some people consider that I’m starting a new journey. I consider going home part of the journey. It’s all part of the journey.”

Luckily, Gray’s journey home didn’t violate Guinness World Records guidelines. To continue adding miles to his world record for the longest unicycle trip, he has to ride at least once every two weeks (taking a new route) and can’t stay in one city for more than two months.

After some time at home, Gray started up his trip again. His plan now includes not only breaking personal and world records but also visit-ing schools across the United States in his Get Out There program to encourage kids to get out, get active, and get healthy. And through it all, Gray maintains his adventurous and uplifting attitude.

“When you do something like this for long enough, everything, even if it’s the worst experience you’ve ever had, turns into something you can laugh about later.”