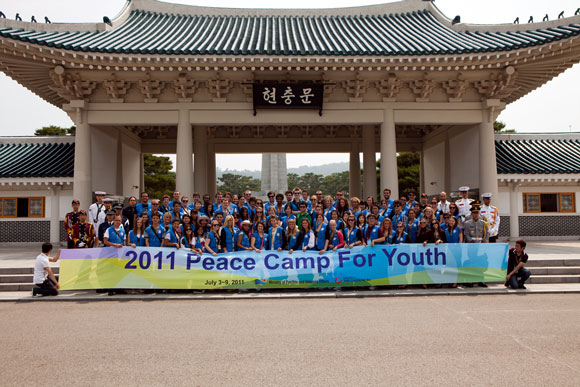 Our whole group gathers outside the Gyeongbokgung Palace. Photo by Peace Camp.

At this moment another day of shining’s coming to here, it makes me brand-new more and more.

At first, I was embarrassed to sing these lyrics; after all, many of the lyrics didn’t make much sense since the song was written by someone whose primary language was Korean, not English.

Having the peace for everyone, breaking the wall from old cold war, this is the voice from the peace in my heart.

Then, after singing it about twenty times in the span of two days, it actually became fun to increase my enthusiasm and even add dance moves as we sang together and performed for each other during waiting periods or on bus rides.

But that last time we sang it, all holding hands and dancing in a single giant circle, it finally meant something to me.

When my cousin Kristalyn proposed that we apply to the Peace Camp—a program offered to descendants of Korean War veterans—I readily agreed. If accepted, participants had the opportunity to go to Korea for a week filled with food, culture, and activities—all funded by the Korean government, save the small price of half a plane ticket. Naturally, we were thrilled when we were both accepted; it was the perfect adventure to follow our freshman year of college.

Though both of my grandfathers served in the Korean War, I knew very little about it. I was quite surprised to find about twenty countries represented at the Peace Camp; people from all over the world aided the South Koreans in the war! The program at Peace Camp was designed in part to help us learn more about the war and Korean culture, but another aspect—perhaps even more important—was to bring people of different races and cultures together in peace and unity. Though some of the memories of the activities and lessons at the camp are now fuzzy, the connections I made with others during my time in Korea remain clear.

On one of the early days of camp, we had a lecture about the war and its effects. Though the material was interesting, the most significant part of that lecture for me was meeting Alex for the first time. He couldn’t remember my name upon our next encounter later that day, but that actually became the funny story that jump-started our friendship. We bonded over our distinct differences, like the fact that I had never had a cup of tea in my whole life and, as an Englishman, he drank about three cups per day.

While perusing the War Memorial of Korea, we read plaques detailing things like the progression of the war and the weaponry used by hostile and friendly forces. My Australian friend Samuel and I also imitated and interacted with several of the statue displays to bring the history to life. As the youngest participant in the camp, Samuel was a fun person to tease and be goofy with, and he sometimes felt like a brother.

Getting together, it makes me smile again.

Another facet of the Peace Camp was exposure to the Korean culture. On one occasion, we learned about the traditional clothing of Koreans, called han bok, typically worn for festivals and celebrations. We were even permitted to try on the clothing, and I was grateful that my friend Suyoung helped me tie that unfamiliar bow. Not only did she teach me how to tie the bow, but she also taught me by example that a peace sign made with the hand should accompany any photo. Su was Kristalyn’s roommate at the camp, so we were introduced early and became friends quickly. Su claimed to have come to the camp to “find her next boyfriend,” which was the first of many funny things Su had to say. I enjoyed Su’s candid honesty, something I learned to be typical of many Koreans.

Bronwyn and I paint Korean masks while learning about each other and our cultures.

Though we learned about Korean culture through classes and activities, we also learned a little bit about other cultures through interactions with other participants. We often shared our cultures by sharing our languages, and by the end of the week, we had unintentionally adopted each other’s accents, yielding an unidentifiable mess of language. Even after a week, I could hardly understand Daniel’s thick English accent, but the effort I exerted throughout the week for that purpose strengthened that friendship. Everyone also had a few new phrases to bring home to each individual country. Before Bronwyn and Nicole taught me some New Zealand slang, I had no idea sweet as meant cool. Getting to know those girls was sweet as!

The destructive war that began in 1950 ironically unified nearly 100 university students from all over the world in 2011. I gained friends from many countries, including England, Korea, Australia, Holland, New Zealand, and Colombia. Sharing the experience with Kristalyn also deepened our friendship. And though I initially found the theme song lyrics a bit embarrassing and cheesy, I felt the power of unity they brought to the entire group on that final night of the camp.

We all hold hands as we sing “Peace in Harmony” a final time.

I came to Korea for an exciting adventure, and yes, I had adventures. But the most rewarding part of this trip were the bonds of peace, friendship, and unity I formed with so many people from so many places.