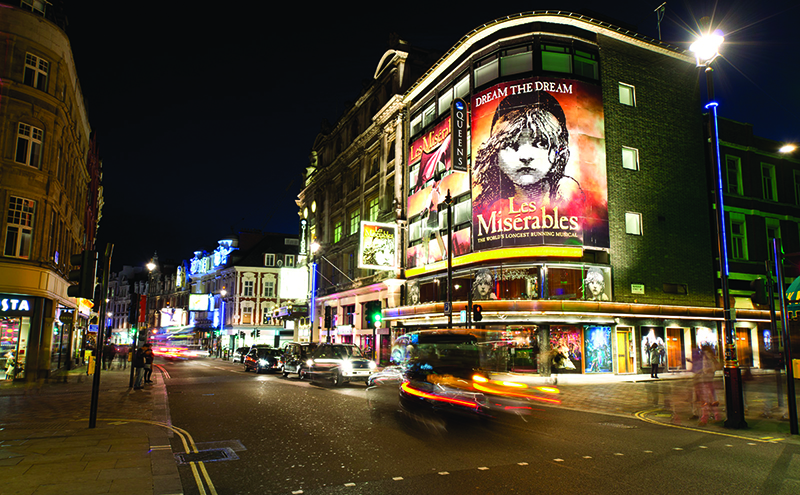 Big Ben, Westminster Abbey, London Bridge—each of these and a thousand other landmarks make London worth seeing. But for many visitors, the most fabulous side of London is found in the west . . . the West End, that is. This side of London boasts some of Britain’s finest hotels, restaurants, cinemas—and, of course, theaters, the hallmark of West End.

In a nation that proudly boasts the name of William Shakespeare, theatrical productions are held to a higher standard than in many countries, and London’s West End certainly upholds this standard. “Theatreland,” located smack-dab in the middle of the West End, includes such iconic streets as Drury Lane, Shaftesbury Avenue, and the Strand, and offers the best in commercial theater.

The 40 incredible theaters in London’s West End host many excellent, lesser-known productions such as Charlie and the Chocolate Factory and Once, a breakout romantic musical that became a hit in 2013. Comedies are a mainstay of the English theatrical scene. How could one ignore that British wit? Becca Barrus, a college student from West Jordan, Utah, who recently spent four months studying in London, says, “I really like English drama, and there’s nothing more English than Shakespeare. But I think I appreciate the comedy of West End theatre the most.” Theatergoers this year shouldn’t miss grand West End musical productions either, from Phantom of the Opera to The Lion King to Stomp, a popular musical where performers utilize everyday clutter.

However, a true stage enthusiast won’t forget London’s famous noncommercial venues, such as the Royal National Theatre, the Royal Opera House, the Globe Theatre, and the Old Vic. These locations offer some of the finest classic dramas, prestigious new dramas, and Shakespearean productions available in the Western world.

The Globe Theatre in London, a recreation of Shakespeare’s original theatre.

To Calgary native Rachel Swendsen, another student who spent time studying in London, the experience was like magic. “I felt like I stepped into the set of a movie. Theaters on every corner with another award-winning show everywhere you look!” explains Swendsen. “And the quality of the productions could give Broadway a real run for its money. I enjoyed each of the 13 shows I went to immensely, and I would definitely recommend every single one of them to anyone who is going to London.”

There is a reason that England and theatre often seem connected, and the West End provides that connection. Magnificent props, elaborate stage productions, terrific directing, fantastic musical and dance numbers, and the sheer overwhelming entertainment draw tremendous crowds every year. For example, in Matilda, a popular West End production, each of the actors, including the children, are incredibly talented, and the props and stage design are so seamless and creative that it is awe-inspiring simply to watch a scene change.

Versatile and detailed set design is one of the major draws for popular musicals such as Wicked.

While London theatre tends to draw enormous crowds of tourists, it also holds particular appeal for actors—and in recent years, quite famous ones. A-list actors and actresses, such as Jude Law, Daniel Radcliffe, Matt Damon, and Gwyneth Paltrow, have all taken their turns performing in West End theaters. Even they cannot resist the experience that comes from the expertise and the history embedded in the very stones of West End theatre. Actor Christian Slater once said, “There’s something about doing theatre in London—it sinks a little bit deeper into your soul as an actor. It’s something about the tradition of theatre, about performing on the West End stage.”