The Whooping Crane is one of the rarest birds in America. Photo by Evangelio Gonzalez. cc

When winter arrives in Texas, it doesn’t come alone. As the new season approaches, hundreds of migratory species, from whooping cranes to monarch butterflies, migrate into Texas, blanketing the Great Plains. Adding to the commotion of winter’s arrival are Texas’s summer residents, such as the Mexican free-tailed bats, who prepare to darken Texas skies on their way home to Mexico. These wondrous migrations, whether northbound or southbound, paint surreal images that cause spectators to stop and enjoy nature’s beautiful creations.

Gotham might have Batman for its superhero, but Austin, Texas, is protected by Mexican free-tailed bats—at least 1.5 million of them. In 1980, the Congress Avenue Bridge underwent reconstruction, and ever since, these millions of bats have made roosting nests in nooks and crevices underneath the bridge. 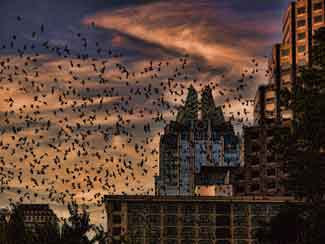 Each summer, clouds of pregnant bats swarm in from Central Mexico to give birth to their baby pups. Over the next couple of months, the mother bats fly through Austin’s skies in search of food for their young. Local bat researchers estimate that the bats consume 10,000 to 30,000 pounds of insects each night. That adds up to 2 to 3 million pounds of insects consumed before the bats return home to Mexico in late January.

This form of natural pest control was not always welcome in Austin. When the Mexican free-tailed bats first arrived, locals feared the massive black invasion and protested to eradicate the bats from the city. Bat conservationists rushed to the rescue, building informational booths all around the Congress Avenue Bridge to inform locals of the benefits of their winged friends. Conservationists emphasized the fact that a massive bat population would keep Austin’s insect level at a minimum, which meant freedom from mosquitos.

Locals soon began to embrace the bats, and today the bat phenomenon brings in more than $10 million a year in tourism funds. Bat Fest!, a weekend festival to honor Austin’s bats, entertains thousands of eager spectators annually. Bat Fest! features a nighttime concert of local artists that starts once the bats have finished hunting. And food trucks and booths keep all the tourists satisfied as they watch the spectacular sky fill up with trails of black smoke.

The best time to spot the bats is during the sunset; the best way to spot them is from a canoe. Dozens of companies in the area offer canoeing tours or small boat cruises that venture underneath Congress Avenue Bridge to see the bats swarm from below. Some of these touring companies include Capital Cruises and Live Love Paddle. The event lasts for up to 30 minutes every night, which allows for a variety of spectacularly eerie photos.

While Mexican free-tailed bats are flying back home for the winter, hundreds of five-foot-tall whooping cranes are landing in Port Aransas, Texas. These majestic birds migrate a total of 2,500 miles all the way from Alberta, Canada, to their private sanctuary in the Aransas Wildlife Refuge.

Conservationists created the Aransas Wildlife Refuge to protect the endangered whooping cranes as there were fewer than 15 left in the 1940s. Today, efforts made by the International Crane Foundation (ICF) have helped the cranes repopulate to over 600.

In support of the conserving efforts of the ICF, Port Aransas, Texas, is celebrating the 19th Annual Whooping Crane Festival, February 19–22. At the festival, environment-friendly vendors sell photographs, paintings, and other forms of whooping crane art to the thousands of participants. 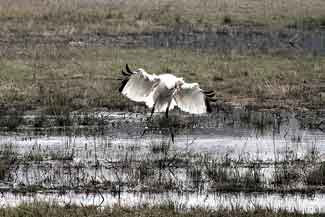 A juvenile Whooping Crane tests its wings shortly after being released from a holding pen on Wheeler National Wildlife Refuge. Photo by Bill Gates, USFWS Feb. 10, 2012.

At the festival, spectators can also take boating or hiking tours to witness the rare whooping cranes dance and sing. During their dance, the whooping cranes flip grass and small pebbles while they toss their heads and flap their wings to attract a mate. They are a rarity among birds and are one of the longest-living bird species to date due to the conservation efforts by the ICF.

Another famous migration route passes over the vast plains of Texas. This route stands as the king of all North American continental migrations—the route of the monarch butterfly. Beginning in March, hundreds of thousands of monarchs depart from Morelia, Mexico, in search of the milkweed plants on which they will lay their eggs.

Locals and tourists alike admire these amber waves of insects (not grain) that flock through the fields of San Antonio. Residents of San Antonio are known to post photos of their Firsts of the Season, also known as an FOS, to Facebook, Instagram, or other social media platforms. Monarch connoisseurs like Monika Maelke love to share the differentiations in migration patterns each season through photos captured in milkweed fields across the Lone Star State. 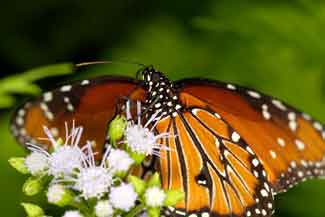 A monarch butterfly stocks up on nectar before the long flight north. Photo by Roy Niswanger. cc

In Whitney, Texas, residents celebrate the annual Monarch Butterfly Nature Festival to recognize the artistic scenes of the monarch’s migration. Most of the festival consists of casual hikes to capture photos of the event, but the festival also encourages spectators to compete in its photo and video contests. Monarch butterflies serve as the festival’s main attraction, but hundreds of other butterfly species native to Whitney splash their colorful wings into the Monarch mixture.

Mexican free-tailed bats, whooping cranes, and monarch butterflies are only a few of the dozens of Native American animals that migrate through the massive territory of Texas. Each of these animals flies through Texas skies, but there are other animals that migrate across Texas by either land or water. Texas provides a warm winter homeland for hundreds of species across North America; these species help to define Texas as a vital destination where visitors can see interesting wildlife.