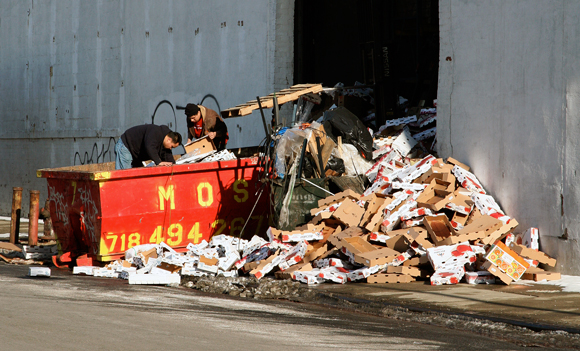 What’s the difference between a fresh, hot hamburger served to you over the counter and the partially eaten, mashed-up hamburger you dig up out of the dumpster? The second one is free, of course! Using a dumpster as a dinner table is a common event for a group of people in New York City who practice freegansim: the practice of living an eco-friendly, anti-consumer lifestyle.

The ideology behind freeganism is that companies of all levels of production detrimentally affect people, animals, and the environment. According to freegans, businesses contribute to global warming and pollution, support sweatshop labor, and test products on animals.

For these reasons, dedicated freegans reject economic systems. This rejection is expressed by boycotting jobs and income. Many freegans instead support themselves (and in many cases, their families) on items they have repurposed, foraged, or grown.

In addition, freegans try to minimize their own negative impact in their communities by living in an eco-friendly way. Specific living strategies include recycling, dumpster diving, rehabilitating buildings and abandoned lots, and minimizing waste.

Freegans have become adept at finding the gems buried among the refuse of society, especially in New York. Take a look at fallingfruit.org, which shows a global map of freegan resources, or dumpsters. It lists about 255 in the New York area alone. These marked locations are accompanied by helpful descriptions, like “LOTS of really expensive sandwiches, especially wraps. Muffins, bagels. Very popular, so sometimes stuff is gone by the time you get there.” Another freegan says, “We found . . . little pies! Lots of them. Mostly meaty or eggy, like pot pies and quiche, all in perfect condition and individually shrink-wrapped. Locals were happy to take them. Also raw pie dough and flour, unpackaged, a bit messy but worthwhile for the adventurous freegan chef.”

Dumpster diving is legal in most of the United States. Trash bags that are put out on the sidewalk on garbage day are considered abandoned property, making them free game. Obviously, enterprising freegans cannot violate private property rights, hop fences, or break locks. The site www.freegan.info recommends you clean up after yourself; if you don’t make a mess, you won’t be ticketed for littering. If someone asks you to leave the area, comply so you won’t be arrested for disorderly conduct.

Freegan society is relatively welcoming and eager to train others in the tricks of the trade. Groups hold regular events in New York, which include Community Swaps (by GrowNYC) in which participants exchange used items; the Wild Food Tours that wind through Central Park, led by “Wildman” Steve Brill, who teaches how to forage the local plants; Fixers Collective, in which people bring broken items and members of the community try to fix them on the spot; and regular Freeganism 101 & Trash Tour gatherings; and the Grub Community Building Meal, held on the first and third Sunday every month, which features food that is found, prepared, and served by members of the local community. Who knew? There is a free lunch if you know where to find it!

Photo by Katie Chao and Ben Muessig, via Creative Commons.