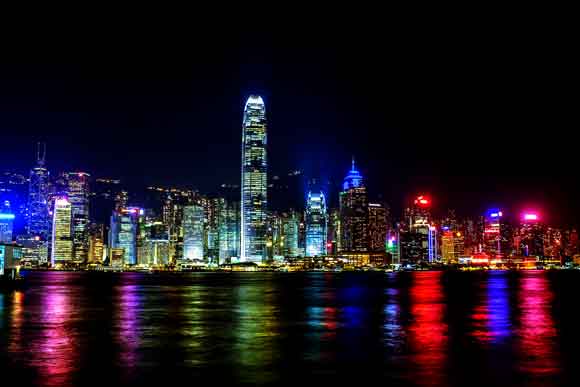 The vibrant lights of Hong Kong reflect across the harbor. Photo by Daniel Go.cc

There must have been seven million lights ablaze on my first night in Hong Kong. I gazed out of the car window, unable to close my eyes for a second, not wanting to miss even one moment of that drive. As we passed high-rise after high-rise, the driver turned to me and said, “Behind each of those lights is a person. Seven million people; seven million lights.” That was the first time it hit me: an overwhelming desire to know the people behind the lights.

My roommate Sandy’s light was dazzling. She laughed generously and shook her head when I tried to wash my own dishes. She always insisted I let her do them instead. When one of us struggled, we cried together, and as she cried, her dark eyes glittered with warmth. She taught me how to play the harmonica, and we would spend hours playing duets together in the dimly lit, one-bedroom apartment that we shared with two other girls. Some nights Sandy and I would climb up to the top bunk in our tiny room, hunched over to avoid bumping our heads on the ceiling. We lit up that cramped apartment with music and laughter as we fumbled our way through our favorite songs. And although Sandy’s English was almost as poor as my Cantonese, as she taught me to play the harmonica, our friendship became unshakable.

Several months later, I moved to Macau, leaving Sandy behind in that beloved, memory-filled apartment. My new apartment was rather run-down, with large glass doors that led out to the balcony. This balcony overlooked the city and directly faced the lighthouse, which stood on a hill in the distance. For a reason unbeknownst to me, there was an old, rusty exercise bike on the balcony. I’d often sit on the bike seat and look at the twinkling lights of the neighboring high-rises, imagining the person each light represented. I felt a relentless urge to know them and to love them, because as different as they were, I felt their light.

One warm night, I took my harmonica onto the balcony and, perching on the rickety bicycle seat, began to play to the darkness. After playing several songs, I paused to catch my breath. It was then that I heard it—the song that I had just played echoed in the wind from somewhere above me. I looked around, mystified, unsure of what I’d heard. But then I heard it again, coming from the high-rise facing mine. I scanned each window of the building, searching for the source of the music. Then I saw him, standing on a balcony several floors above, his head swaying to the music as he played a Chinese flute. I couldn’t see his face, and he couldn’t see mine—there we were, just dark silhouettes standing against the bright light of our apartments. He transitioned into a rendition of “Amazing Grace,” and I joined in with my harmonica.

This connection, which surpassed language or information, lasted just a few minutes. When we finished the song, he waved to me, and I waved back before returning inside. He continued to play as I turned off my light and crawled into bed. I smiled in gratitude, and I soon drifted off to sleep to the tune of his light.