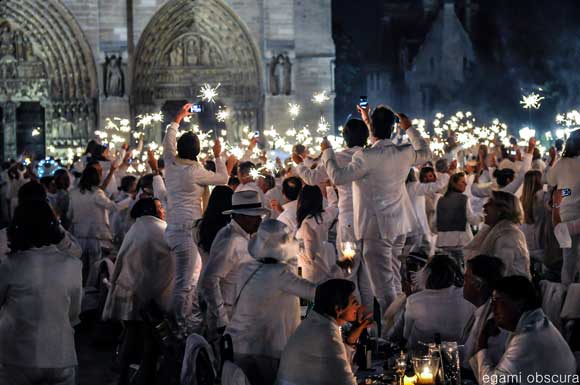 I was giddy. Austin and I had been waiting all day for the email telling us where and when to meet up with dozens of other strangers, all dressed in white, to eat a picnic dinner. Austin had heard of the event only a couple weeks before the actual night, and we’d spent that time rummaging through thrift stores trying to find any white articles of clothing we could. We lucked out and even found the perfect basket to carry our picnic dinner and white dinnerware.

A few hours later, we sauntered onto the gazebo island in Liberty Park with other guests in their white finery and mingled with people from all over Salt Lake and Utah County. The park was the perfect backdrop, as the setting sun shone over the pond and swimming ducks. As we ate dinner and chatted with new friends, a live band played in the background and a magician roamed the tables doing tricks. The night was capped off with a fire juggler and sparklers.

Before Austin had mentioned Dinner in White, I had never heard of anything like it. I knew of flash mobs dancing in Grand Central Station and even on my own college campus, but a flash dinner? As the day of the dinner approached, I talked with more people about it and did a little digging. Salt Lake wasn’t the first and wouldn’t be the last city to hold a Dîner en Blanc. The first of the dinners was held in Paris with barely a handful of close friends. Now, twenty-five years later, the Parisian dinner hosts up to 10,000 guests, and the secret dinners have spread to the United States. New York City’s 2012 Dîner en Blanc hosted thousands of guests and included a string quartet. That same year 1,300 people attended in Philadelphia. Now, Dîner en Blanc is held in over 20 locations worldwide including Paris, Barcelona, Singapore, Montreal, and Sydney. Guests in Montreal not only dress up in white, but also wear white masks to add to the air of mystery. Last year, Singapore’s guests dined on a beach and sent out floating wine bottles with messages inside. And Dîner en Blanc in Abidjan, Côte d’Ivoire, held a costume competition and ended the evening with each guest releasing a white balloon into the night air.

The dinners provide guests with a chance to discover lesser-known hot spots in their own cities and to meet people from all walks of life. Austin and I spent the evening chatting with two best girl friends living and working in Salt Lake. Because attire is restricted to one color, everyone has the chance to get creative. Half of the fun is spent in trying to find something no one else will be wearing. Managing a headband with feathers, I was outclassed from the start as we saw women wearing hats with giant bows and men who sported white suspenders, bowties, and fedoras.

Dîner en Blanc opened up a new side of a city I thought I knew so well. Guests chatted about everything from everyday jobs to makeup secrets. But that wasn’t the main talk of the evening. With so many different cultures and backgrounds represented, talk soon turned to food. Most guests had simple dinners: turkey sandwiches, lasagna, or finger foods. What really stood out was the variety of desserts. French macaroons, chocolate taffy, and brownies slathered in cream cheese frosting glistened among their white surroundings. Before we knew it, dessert plates were being shuffled quickly down every table. Everyone wanted a taste of the chocolate cake. What kind of syrup is this?  Did you make this at home?!  Can I get the recipe?

Suddenly, every barrier—whether social or linguistic—dropped. Noses were covered in crème fraîche, fingers were licked, and chuckles were lost in mouthfuls of sugar. It no longer mattered that we would never see one another again; together, we had shared a moment that could only have happened with knife and fork in hand.