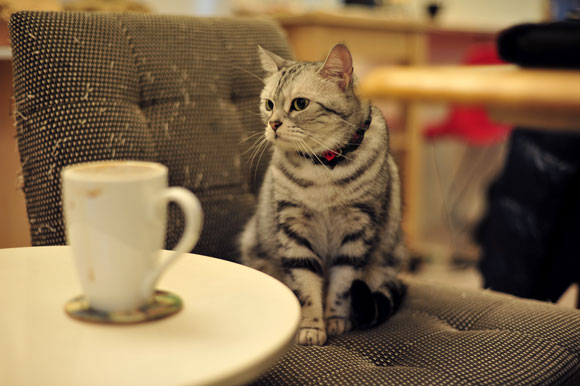 Stop in Korea, Japan, Paris, London, Montreal, Malaysia, Spain, or Copenhagen for a cup of tea with cattitude.

When you take off your shoes and step into the Hello Cat! cat café in Cheongju, Korea, you step into a feline lover’s paradise. Soft meows mingle with the fluffy electronic pop playing in the background, and a smiling Asian woman with short, curly hair takes your 8,000 won (approximately $7) cover charge. Mint green walls, red molding, and twinkling lights combine with eclectic wooden furniture and decorations made of yarn to create the cozy, homey feeling that hangs in the air.

Western tourists and native Koreans sit on pastel-colored chairs while sipping coffee, boba tea, and fruit smoothies, but the true guests of honor are the eating establishment’s twenty-odd cats. Short and stocky, long and lean, brown, black, and white felines mill around visitors’ slippered feet, recline on whatever furniture they wish to, and playfully investigate the bags and belongings of the people who have come to adore them. Differently colored ribbons on the cats indicate varying temperaments and friendliness toward guests. Many of the cats have haircuts fluffy and styled enough to make any self-respecting alley cat blush. Tabbies and angoras “on break” rest in illuminated glass cases, surveying their feline brothers and sisters on duty.

Cat cafés like Korea’s Hello Cat! are now found in numerous cities but have their roots in Japan from the early 2000s. They have since spread to major urban centers across Asia and Europe and are beginning to pop up across North America. As internet culture and cat-based trends sweep the globe, cat cafés offer visitors in major cities across the globe a unique way to experience quirky elements of local culture and simultaneously unite disparate locations under a worldwide umbrella of cuddly cuteness.

Adam Farrell, a university student who lived in Korea for two years, feels that cat cafés have thrived in Asia because of the importance of the communal space in Asian culture. Farrell is majoring in Asian Studies and visited Hello Cat! in 2012. “I think the biggest reason cat cafés have done so well in Asia is because of the cultural need there for communal spaces and the need for cutesy and innovative ideas,” he says. “The idea of the communal space where you go meet with your friends is so prevalent in Korea and throughout Asia.” Farrell believes that the sense of community that draws Asian patrons to mingle in cat cafés goes all the way back to Confucius’ teachings on togetherness and the importance of focusing on others before oneself.

Regardless of what Confucius would say about teahouses full of purring, beribboned kittens, it is evident that the citizens of major cities all around the world approve. Lady’s Dinah’s Cat Emporium, a cat café in London, requires bookings months ahead of time. Le Café des Chats in Paris recently opened a second location to accommodate the swelling number of guests, and visitors at the unrelated Café des Chats in Montréal don’t seem to object to a giant placard that reads “Le chat est Roi” (The cat is king) on the café’s wall. This last year, cat café pop-up shops in California and New York were all the rage during the brief period of time they were open, and various entrepreneurs and cat enthusiasts are clamoring to open up permanent shops in Portland, Seattle, San Diego, Denver, and Cincinnati. Though the cat cafés in the United States have had a bit of a hard time overcoming pesky health codes that currently don’t permit animals in commercial eating spaces, it is clear: the people have spoken, and cats are in.

What is responsible for the sudden rise of the cat café? Some suggest that cat cafés are a real-life extension of the internet cat craze perpetuated by an endless supply of cat videos, Grumpy Cat, Princess Monstertruck, and the general hipster propensity for all things different and just a little bit odd. Regardless of whatever cultural influences led to each café’s origins, cat cafés are a downright delightful place to grab a cup of tea and cuddle with something snuggly. So next time you are in Korea, Japan, Paris, London, Montreal, Spain, or Munich, take a step off the beaten path, through the kitty door, and into a café full of cats and happiness.