When it’s 102 degrees in the middle of Nevada’s Black Rock Desert, everything burns. The Playa, as it is known to those who brave the bleak desert conditions, is a dry lakebed, a desolation of acidic dust, and a place of raw self-discovery. Each year at the end of August, this seemingly uninhabitable domain becomes a thriving and vibrant city filled with around 70,000 participants living in tents, RVs, and yurts. Each participant is radically devoted to the Burning Man tenet of selfless gift-giving. Though the desert itself is in some ways a furnace, the real burning happens inside the participants, also known as Burners, as the Playa refines them and pushes them beyond their limits. 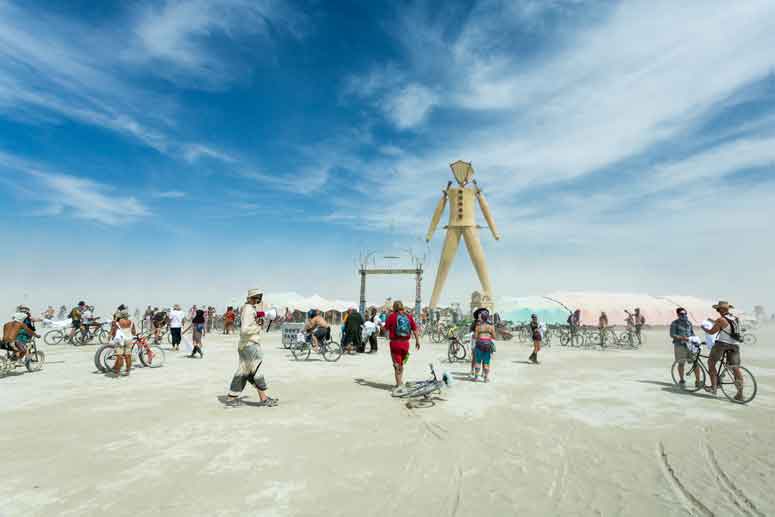 Around 70,000 burners cover the Playa during the week of Burning Man. Photo by Duncan Rawlinson. cc

Give What You Have

Trying to explain the Burning Man festival to a non-participant is like trying to describe fire to a fish. Tim Bell, an actor from New York City, says of the event, “Everyone there has a very different experience. Every single person there has something to contribute.” Although all Burners are expected to support themselves throughout the week, all are expected to give. Artists, who spend months preparing incredible displays of innovation, share the results of their labors with their fellow Burners. Others distribute strings of beads or apply sunscreen to the sun-seared shoulders of passers-by. One camp offers temporary tattoos, while another offers free showers.

Curt Hamilton, who first attended Burning Man in 2013, says, “There’s no money exchange there. The only things you can buy there are ice and coffee. Everything else is gifted. You’re expected to take care of yourself, but everyone gives something to the community. You can’t barter; you just give what you have.”

Burn What You Should

The perimeter of the camp is lined with a variety of sculptures, the most famous being The Man. Every year The Man is built differently; some years, he soars to over 100 feet. Beyond The Man lies The Temple.

Out of all the structures, Hamilton explains, “That one is more sacred and spiritual. People go there to write things they want to let go of. Sometimes they leave notes for people who have passed away.” And at the end of the week, these structures, composed primarily of wood, are engulfed in flame as onlookers observe with awe and reverence, acknowledging the fleetingness of the moment with rapt attention. When asked why the artists would consent to seeing their creations turned to ash, Hamilton says simply, “It’s about letting go.”

Be Where You Are

When Burners arrive at the Playa, they receive a timetable outlining all planned activities throughout the week. Events could include a midnight dodgeball game, a Shakespeare open mic night, or a rave concert to Skrillex music. Logistically, participation in every event is impossible. But to Bell, that doesn’t matter.

“What I focused on was learning to be in the moment, no matter what I was doing. Doing dishes in the camp, I had some of the most incredible experiences, some of the best conversations. Each moment I’d think, I could be anywhere else doing anything else, but I’m here doing this, and I’m going to give all my attention to this. And that lesson was really enlightening in itself.” During his stay on the Playa, Bell felt the burn in a very real way; he impulsively agreed to participate in the Burning Man’s 31-mile ultra-marathon. Although he was a runner, he had not trained for a race of such a distance and in such an environment. After pushing through 31 miles—9 of them in the buff, nudity being an acceptable personal decision on the Playa—he stumbled into a stranger’s camp and threw up. Of the experience, he says, “I was miles away from my camp; I was sick; I was tired. There was no way I could clean this up. And this guy from the camp gets a shovel and scoops it right up. Then he gave me a hug and some water and sat me down to recuperate. No questions asked. That kind of experience happened all the time. It creates an environment where you’re not afraid to ask for something that you need. You’re not afraid to ask because you’re so willing to give to anyone.”

The Playa gives too. “I feel as though now I’m able to be more present in my life,” concludes Bell as he reflects on what the Playa gave to him. “I walked away high on life, feeling like I’d just spent a week doing something important, like I’m a better friend and a better person.”

So visitors, beware. You might just leave the Playa a little bit singed. Because, in Bell’s words, “The Playa is just a place. The people make it Burn.”