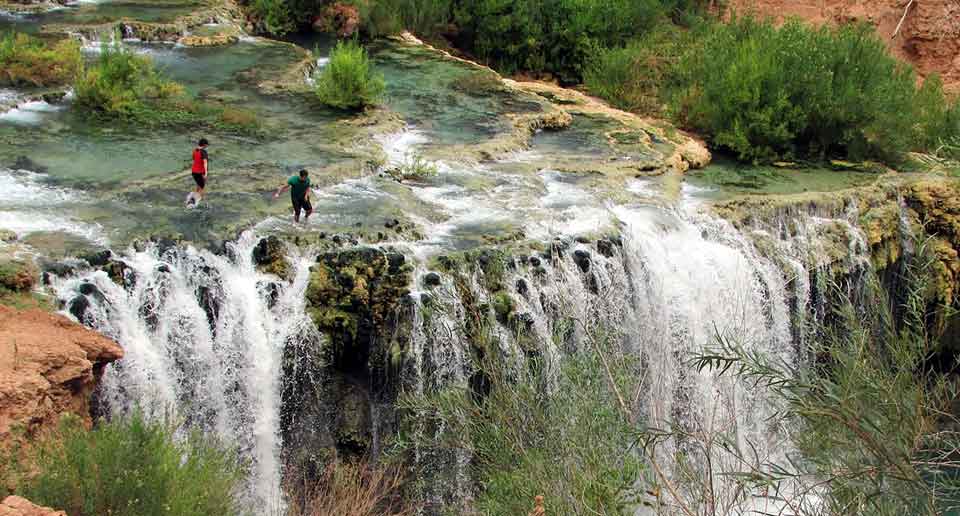 “You don’t have to do it!” my mother yelled to me. I stared down at the blue water tugging my ankles toward the cliff, which at that point became a stunning thirty-foot waterfall. A chill vibrated through my entire body, but it wasn’t caused by the cold water.

We had hiked ten miles through a red canyon in Arizona to Havasupai , a Native American preserve. We camped under brilliant stars at night and visited astonishing waterfalls during the day. Unsatisfied by those experiences, I still had the urgent desire to jump off this cliff, just as I had seen others do when we first entered the preserve. This desire drove me to this moment, following the cautious steps of my father on the rocky footholds and ignoring my mother’s comment.

I did have to do this.

The closeness of the edge unsettled me as the water’s roar grew in volume. The sound reminded me of a different cliff jump I had attempted but didn’t accomplish. The wrenching fear in my gut gave way to my resolve. This exhilarating opportunity had to be seized.

“Make sure you jump here,” my father reminded me, and a moment later he bounded through the air. I watched frightfully as he plunged into the water and popped back up a few seconds later.

Ominous clouds blanketed the sky above, as though gathering to see if I would really do it. Taking a steadying breath and looking straight forward, I realized that if I did not jump now it might not happen. The butterflies in my stomach were becoming too intense, nearly paralyzing me. With one last surge of adrenaline I threw myself forward.

Less than a second later, I hit the icy river. There was a moment of complete darkness as the waters enveloped me. I started swimming toward the surface, anxious to breathe. When I finally found air, gasping for it, a smile crept onto my face. I floated onto my back for a moment to breathe, the frigid water gently holding me. After a moment, I swam leisurely toward my father.

“I’ll be honest, I thought you were going to back out,” my father admitted once I reached him.

“No way,” I said proudly, realizing my new passion: overcoming fear is the best way to feel alive. The fluttering butterflies and the sinister water were not the source of paralysis; they were the source of rejuvenation.

Sunglasses, wallet, passport, and a half-empty bottle of sunscreen. Those were the contents of my adventure pack as my travel companion and I took the ferry to Koh Phi Phi, Thailand. The island was intended to be a day trip, so we had left our 40-pound backpacks carelessly stored in a hostel back on mainland Phuket. But upon arrival in Koh Phi Phi, our itinerary changed: there would be no ferry back to Phuket until the next day. Soon it began pouring monsoon rain and in our haste to book one of the few backpacker guestrooms on the island, my companion’s phone was stolen. With everything going wrong, we were lucky to have grabbed our passports on a whim that morning—foreigners must present passports to check into any hostel.

To take our minds off the rain, the stolen phone, and our empty adventure packs, we booked snorkel tours and explored the island. By late afternoon the sun began setting and our swimsuits dried slower and slower. Realizing we needed supplies, we stopped by some stores in our wet swimsuits and picked up toothbrushes and a bar of soap. After a month of backpacking in Southeast Asia, we no longer brushed our hair or wore makeup, our Chacos our only fashion statement. But wanting to look pretty for dinner on the island, we picked up cotton dresses as well. Dinner was excellent pad thai and panang curry, followed by a fire show and public showing of Leonardo DiCaprio’s The Beach. To finish our evening we found an internet café to connect back home—in my case, to text my parents that I was safe.

“Not today, Jerry. See you tonight?” Jerry ran one of the snorkel expeditions on the island. Jerry also knew the best nighttime hangouts, the best way to meet people. But this afternoon I would spend on the beach. I had discovered a book exchange hut and fabulous fresh pineapple pizza; after several days of excursions, there was a lawn chair in the sun with my name on it.

Our ferry departed the next morning. My adventure pack was still empty, and it was raining again, but as we watched the sparkling sea foam of Koh Phi Phi slide out of view, I couldn’t help but smile. Koh Phi Phi had become my island.

As I hiked the Jurassic Coast, tall grasses swayed and every breeze swept me toward Boscastle. A little harbor town, Boscastle is cut in half by an inlet, so white bridges span the water every 200 yards. Crossing a bridge, I wondered if this was my chance to connect with the people of England. I had heard of a weekly sing-along at the Wellington Hotel. So I had packed along my guitar, waiting for when I could finally sing with the locals.

Once I reached the pub, I saw people of all ages passing around triangle sandwiches. Jack, the owner of our B&B, was there. He was an oil painter; his B&B was yacht-themed, and his Scottish terrier Ollie kept him company. Earlier at the B&B, while sitting in the retro, vinyl-cluttered lounge area, I listened to Jack’s playlist of classic rock. I moved towards the back and watched as a beautiful sun-worn woman began each song. Cheryl’s voice was rich and deep, pleasantly gravelly when she struck the low notes. She had kind, wrinkled eyes, reminded me of soft, oiled leather.

I began to feel nervous. I was terrified of performing, but I had carried my guitar so far. With a deep breath, I grabbed my guitar and walked over.
I sat next to Jack, who encouraged me to start a song. I trembled as I began the Nat King Cole classic, “The falling leaves, drift by my window. The autumn leaves of red and gold.” My hands shook as I sang, “I see your lips, the summer kisses, the sun-burned hands I used to hold.” On “hold” I forgot the chord, but Jack came to my aid, strumming the chord as Cheryl joined in singing, “Since you went away the days grow long. And soon I’ll hear Old Winter’s song.” I joined back in along with all the other British voices: “But I miss you most of all, my darling, when autumn leaves start to fall.” My inadequate playing had become a communal effort. At the end of my song, I was officially initiated. Cheryl handed me a triangle cucumber sandwich and said, “You’re one of us now. That means you get a sandwich.” It tasted like sweet, cucumber relief.

At the end of the night, Cheryl came up to me. Her soft hands encased both of my cheeks as she looked me in my eyes and kissed my forehead. She said I was lovely and would always have a place in Boscastle. And as Jack and I walked across the bridge carrying our guitars, I realized that I had found a place to belong in England.