Tying the Knot: Weddings around the World

Intricate designs are painted on the palms and feet of Indian brides. Photo by Amar Javed. cc

An arrow streaks through the air and strikes a beautiful woman. Then another one, and another one. The man with the bow stops shooting and walks over to her. He gathers the arrows and breaks them, one by one, to show that he will love her forever.

Though it may not sound like it, this is actually part of a wedding, specifically for the Yugur culture in China (and don’t worry—the arrows don’t have arrowheads). Tying the knot doesn’t always consist of the Western style of becoming engaged, wearing diamond rings, adorning white dresses, and kissing the bride.

In many cultures, the process of love typically begins with dating and engagement. However, how single people find love varies across cultures.

In Somali culture, women don’t take dating lightly. “If you bump into your Prince Charming and you decide you want to date him, it’s a serious commitment to consider him for marriage,” says Mayran Mohamed, whose family is from Somalia. “If women [dated around], they would be seen as shady.”

Once a woman finds someone to be exclusive with, she goes to her siblings to get approval of the man; she doesn’t even talk to her parents about who she is dating until they are engaged and have a wedding day chosen. “It is disrespectful to talk to your parents about whom you are dating,” says Mohamed. “If you do and who you are dating doesn’t work out, your parents won’t have a high opinion of you.”

Once the parents are informed of the wedding, all the men in the woman’s family interview the groom-to-be. If the men approve, the woman comes into the room to formally accept the engagement. The women of the family come to meet the groom-to-be, and they eat, laugh, and take lots of pictures. 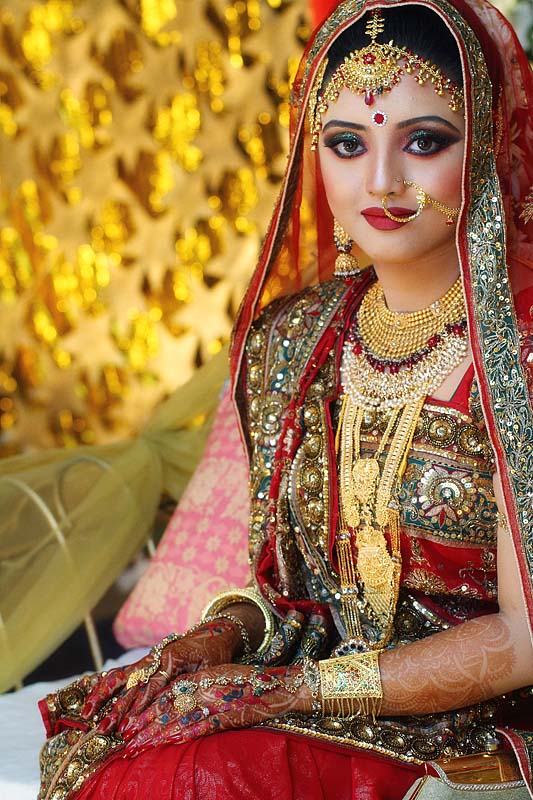 Similarly, people in the Philippines follow a traditionally lengthy and complicated process to find love—even more so than in other countries. If a Filipino man sees a woman he likes, he won’t talk with her; instead, he must find a “go-between” who will talk to the woman’s father and seek permission for the suitor to visit. If the father agrees, the man and the “go-between” go to the house where introductions are made.

At that first visit, the suitor must bring gifts to the family, including a special one for the daughter. During the next few visits, he will continue bringing gifts and will begin serving the family by chopping wood for them or completing other chores. At night the suitor plays a guitar and sings love songs outside the woman’s window until she invites him inside.

A Filipino woman usually tries to play hard-to-get, believing that in doing so the man will value her more because of all his hard work to get her. After some time, they can date in public, but they have to have a chaperone; unmarried couples can’t be left unsupervised. Once they decide to marry, the man brings food, presents, and a dowry to persuade the father to let him have the daughter’s hand in marriage.

In contrast, in Kazakhstan, the man’s family finds a bride for the groom. Once the family has selected a woman, they send matchmakers to the woman’s home. If the marriage negotiations are successful, the matchmakers and the woman’s family eat a liver and broad-tail sheep fat dish to signify successful courtship.

The next day, the woman and the matchmakers go to the groom’s house. The groom’s parents decide how many of the woman’s close relatives they want to honor with gifts. During the ceremony of engagement, the man’s parents place earrings on the woman, signifying that the man and woman are officially engaged.

Put a Ring on It

Spaniards wear their wedding rings on their right hand, a custom followed in most northern and eastern European countries. The custom is also partly followed in Brazil. Brazilians wear the ring on the right hand, but only during their engagement. During the wedding ceremony, the rings are moved to their left hands. However, if a ring falls on the ground during this transition, it is believed to symbolize that the marriage will not last. The rings must also have the spouses’ names engraved on the inside.

Other cultures don’t worry about what hand to wear a wedding ring on. Some parts of India use a Bichhiya, or toe ring, instead. During the marriage ceremony, the groom will put a toe ring on both of his bride’s second toes. The toe rings serve as a symbol of their marriage.

Yet, some cultures leave out rings entirely. In Wales, couples use spoons. The man carves a piece of wood into an ornate spoon and presents it to the woman he loves. If she ties a ribbon around the spoon and wears it around her neck as a necklace, it means that she has accepted his proposal. They are then officially engaged.

Like the Welsh, the Spaniards believe that simpler is better. “In Spanish weddings, we don’t spend very much [money] on the rings,” says Carmen Alldredge from Madrid, Spain. “They are just regular bands; no huge diamonds.”

Much like Spain, Ireland traditionally doesn’t include diamonds in wedding rings. Instead, the Irish think having one’s respective birthstone on an engagement ring is good luck. Some Irish also use a Claddagh Ring, named after a fishing village in Western Ireland. Usually, the ring is handed down in families from mother to daughter to be used as the engagement and wedding ring. The design of the ring includes a crown; if the crown is pointed toward the wrist, the wearer is engaged, and if the crown is pointed toward the fingertip, the wearer is married.

All over the world, a wedding ceremony marks a milestone in the life of the bride and groom. The wedding day is meant to be a fond memory the couple will treasure forever. For this reason, women want to look their very best, but that doesn’t necessarily mean wearing the biggest, whitest dress they can find.

In India, brides wear saris with gold or silver detailing. The color of the sari can depend on the community, but wedding colors are usually red, yellow, green, or white. Red is a popular choice because it symbolizes marital happiness, prosperity, and fertility. Intricate henna decorates the bride’s palms, wrists, arms, legs, and feet. After the wedding, the bride isn’t expected to do any housework until after the henna has faded away.

Weddings in Donje Ljubinje, a small town in Kosovo, also include vibrant dresses and patterns drawn on the bride’s skin. Here the townspeople make the wedding dresses by hand, and the dresses are usually very colorful. To top off the look, brides paint their faces for their wedding day. The paint creates beautiful patterns and is often embellished with sequins. Brides do this because the paint is said to ward off bad luck.

At weddings in Kyoto, Japan, the bride and groom drink sake to signify their union. Photo by gwarr. cc

Instead of using paint, Chinese brides wear dresses of red for luck. In China, a bride can have three dresses for her wedding. The first dress she wears is the qipao, a slim-fitting dress that is usually red. The second dress is usually a white dress that copies the style of Western wedding dresses. For the reception, the bride slips into her third dress, which can be of any color or style. In some areas of China, a bride will change multiple times during the reception to show off her family’s wealth.

Instead of red, Afghani women wear green wedding dresses. According to Islamic tradition, green represents prosperity and paradise. Afghan weddings are joyful but somber events. This is evident on the bride’s face as she shows her understanding that marriage marks a momentous point in her life. Her sober expression is covered with heavy make-up.

“You may now kiss the bride.” Most people are familiar with this phrase, which usually follows the pronunciation that the couple is now man and wife. Kissing plays a large role in some weddings, but there are other ways to seal a marriage.

In Somalia, the wedding ceremony lasts a bit longer because the bride has to answer “yes” three times. During the ceremony, the bride is asked twice if she agrees to the marriage. She is then taken into a private room and asked the question again. This is to make sure that the bride is not being forced into the marriage. If she says “yes” three times, the family and neighbors come forward to congratulate the couple.

Instead of drinking sake, a popular custom in African cultures is broom jumping. The tradition of broom jumping most likely originated in Ghana during the eighteenth century and is still carried on today in many different places. After the wedding ceremony, a couple jumps over a broom to symbolize sweeping away their old life and welcoming in their new life together. As the couple jumps over the broom, whoever jumps the highest is said to be the head of the household. 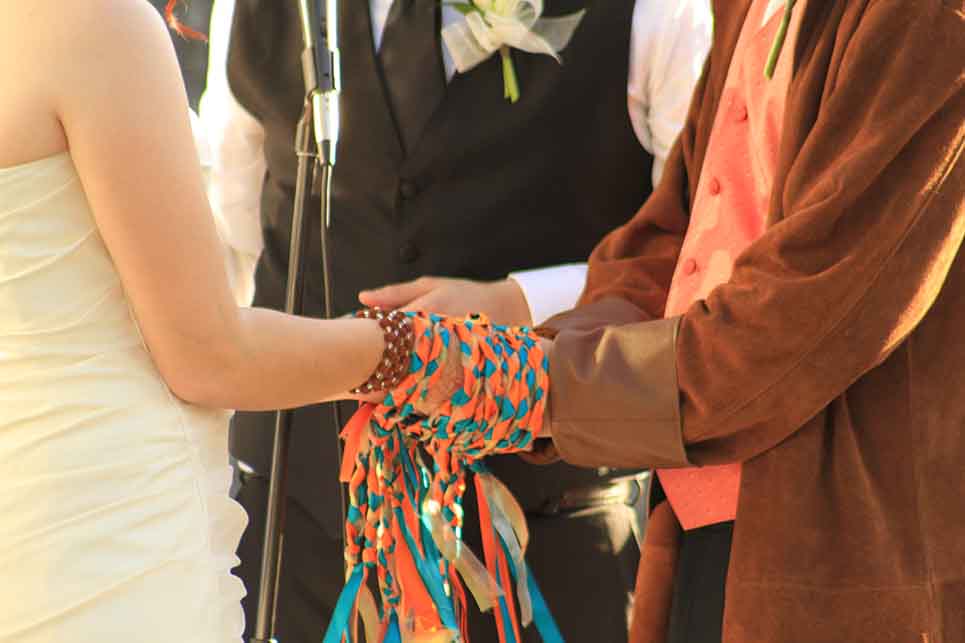 Some couples literally tie the knot as they participate in handfasting during the wedding ceremony. Photo by Ruth Madeleine. cc

Instead of a broom, a shawl or quilt can also signify a couple’s union. After a Scottish wedding ceremony, a groom will put a shawl, embellished with his clan’s colors, around his bride’s shoulders and fasten it with a silver pin. A similar tradition occurs in French Polynesia. After the ceremony, a newlywed couple is wrapped in quilts known as tifaifai. The more quilts that are wrapped around them, the higher their status.

Hunting for a happily ever after doesn’t always need to include expensive diamond rings, billowing white dresses, and official first kisses. Couples can wear simple bands, brides can wear green dresses, and grooms can shoot their bride-to-be with blunt arrows. Two people in love can participate in any number of unique cultural traditions. Whether traditional or contemporary, there are many different ways to tie a knot that can secure a happily ever after.