Picture it. New York City. Tickets to a special concert at Carnegie Hall. You walk through the renovated main levels with a sense of awe for all the history breathing within this space. As always, the season lineup is varied—children’s concerts, local orchestras, and big-name performers. For its season opener in October 2014, the Berliner Philharmoniker will honor the hall.

New York City’s Carnegie Hall is well known not only for its history but also for its continuing role as an epicenter for cultural enhancement through its many music education programs and stellar performances. It is a shining gift and a treasure.

But did you know there are other music halls and libraries around the world that also bear the name of Carnegie? Some sources say there have been up to 2,500 of them. In many of these buildings, the legacy of Andrew Carnegie lives on today. We will look at Andrew Carnegie’s legacy and then glimpse four of the buildings that bear his name.

Over the years, many of these libraries and halls have dwindled into obscurity, only to be condemned and torn down. Yet some of these cultural centers have been saved by their communities and continue to fulfill cultural and educational needs in outstanding ways.

Building a Legacy of Carnegie Halls

Andrew Carnegie was born in Dunfermline, Scotland, in 1835 and immigrated to America with his family at the age of 12. He worked hard and became expert at whatever he tried—going from telegraph operator to one of the wealthiest men alive at the turn of the twentieth century.

Carnegie’s rise to the top taught him many things. He learned that sheer determination and savvy investing could take him places. But later in his career, he also embraced the idea that his wealth would do him no good if he held onto it—and he became a legendary philanthropist, giving away through gifts and trusts every cent he made, and leaving nothing to his posterity.

Andrew Carnegie knew the value of public libraries because he didn’t always have access to a private library. Carnegie Hall in NYC is a timeless monument. Compare the following photos taken in 1963 and in 2008. The first Carnegie building was a public library built in 1883 in his hometown in Scotland. Over the years, countless recipients have benefited directly from his gifts in the form of libraries and music halls built across the United States and abroad. 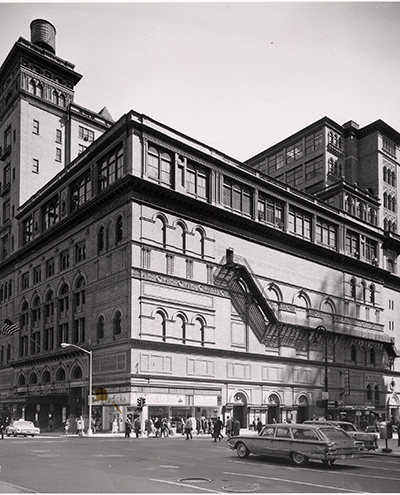 The Andrew Carnegie Free Library and Music Hall in Carnegie, Pennsylvania, is best known to its patrons as the Carnegie Carnegie (see photo on page 32). It provides the community with a library and also offers music education and performances as well as other cultural activities throughout the year. One of the unique aspects of the Carnegie Carnegie is its Civil War Room. Housing invaluable artifacts, the room itself provides a unique historical record of the first part of the century.

A gift of $12,500 from Andrew Carnegie to the city of Ballinger, Texas, made it possible for this beloved library to be built and opened in 1911. While it has always been used as a library, it also served as an Army-Navy Club during World War II for the cadets from the Harmon Training Center, a flight school for the United States Army Air Force located at Bruce Field. The war took its toll on the town, and the library became neglected until 1975, when the Ballinger Bicentennial Committee worked to restore it. At that time, the Carnegie Library of Ballinger was placed on the National Register of Historic Places, ensuring its future within the community and giving it a rightful place in US history.

“The greatest part about the Ballinger Carnegie Library is the historical aspect of it,” says librarian Ruth McVey. “Many Carnegie libraries have been changed from their original state into offices or used for other things, but this one has always remained a library through and through. It’s in working condition. Yes, there are some things that need to be worked on, but it still stands proud and has been doing so for over 100 years.”

Seeing this Carnegie library is worth the stop along the highway. From the wood flooring to the upstairs hall and the towering pillars along the front, the library shines like a beacon within the community. 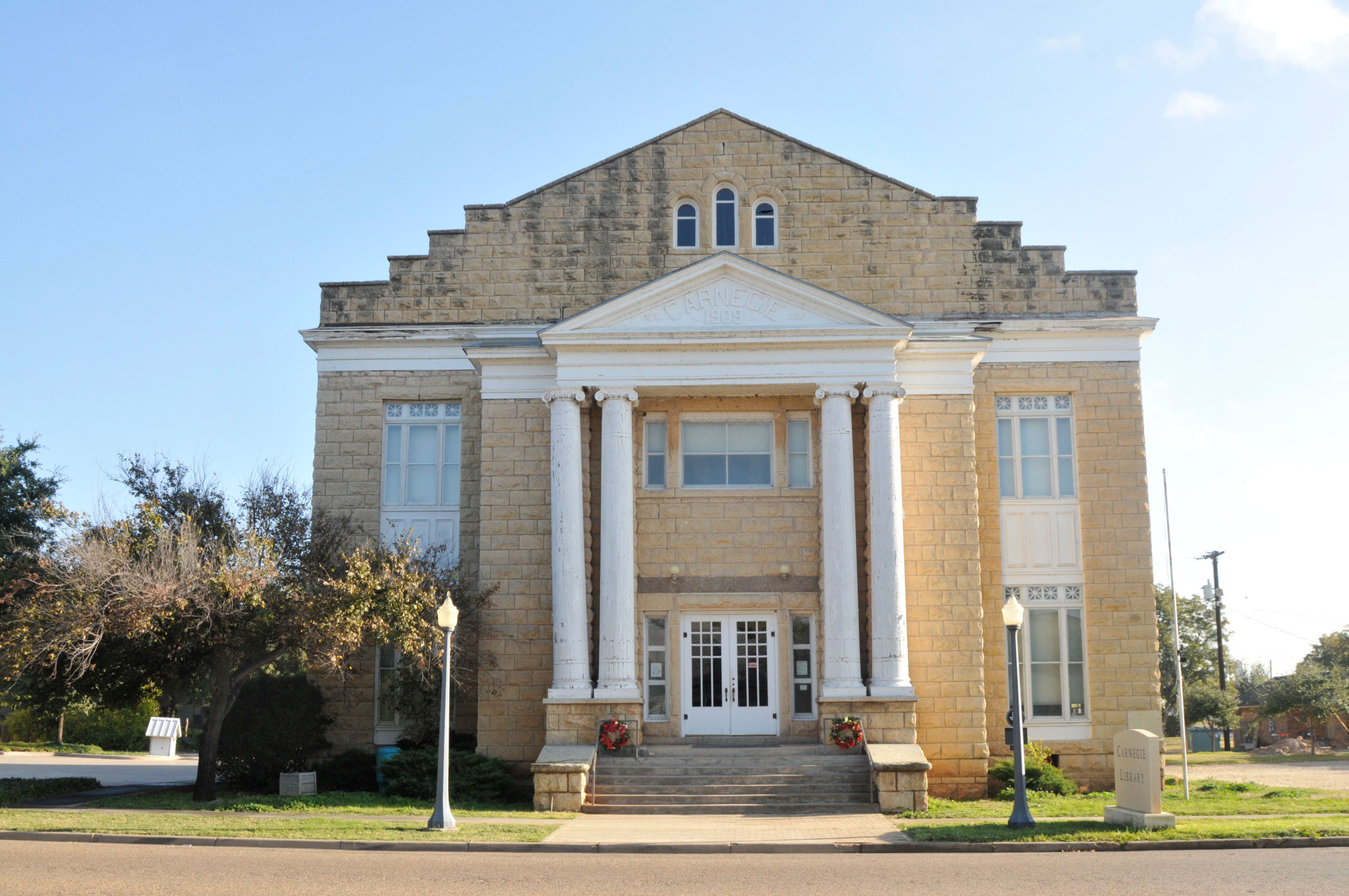 The Carnegie Library in Ballinger, Texas, celebrates its 113th anniversary this year.

A fire destroyed the Lewisburg Female Institute in 1901. This tragedy led Dr. Robert Lee Telford, then president of the school, to contact Andrew Carnegie to ask for funding for a replacement. When Dr. Telford was able to get James Laing, a trustee for the school and a native of Dunfermline, Scotland, to meet Mr. Carnegie, he received funding to replace the building. No expense was spared for the new structure. A bowling alley, a laundry room, and a chapel became part of the school, in addition to the classrooms.

Through the years, the building’s uses continually transformed until it was on the brink of demolition. Fortunately, the building was saved by the efforts of area residents, who organized the not-for-profit Carnegie Hall, Inc., to serve four surrounding counties in West Virginia. Visitors will find a pleasing array of art exhibits and performances to enhance their trip to the mid-Atlantic region. 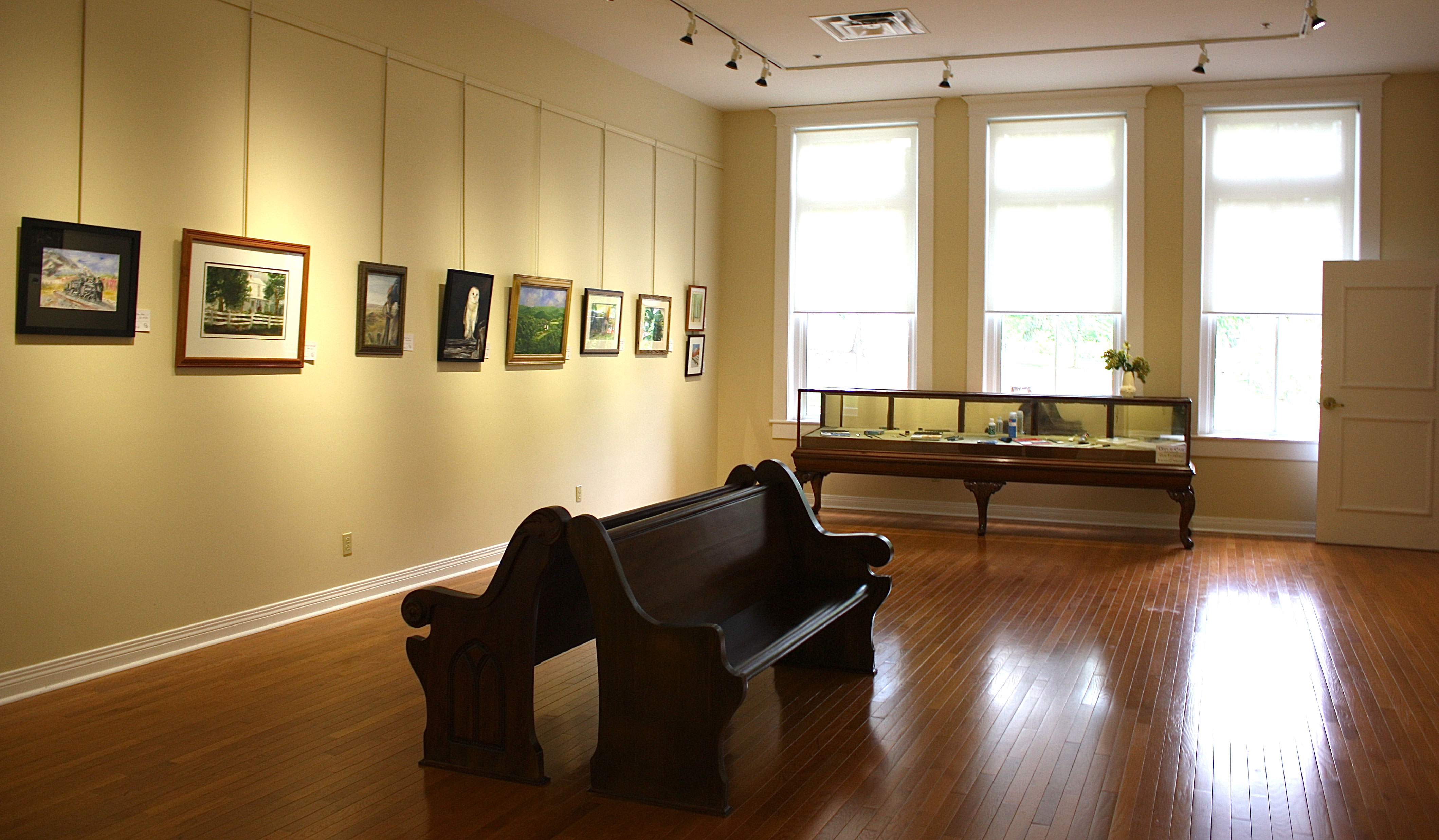 Galleries in the Carnegie Hall in Lewisberg, West Virginia, exhibit art year-round and are free to the public.

The Dunfermline Carnegie Library is the first Carnegie-funded free library in the world and is prized within the community. Youths, teachers, and parents make frequent use of this historical yet functional facility. Judith Todd, a patron, explains that she uses the library not only to borrow books but, more importantly, to “share stories” with her children. Another patron, Elizabeth Simpson, age 14, says she reads so much that she couldn’t afford to buy that many books. The financial efforts by the Lottery Heritage Fund, Fife Council, and the Carnegie Dunfermline Trust contribute to keeping the Carnegie Dunfermline Library in beautiful working order.

This library closed in April 2014 for renovations and for the additions of a museum and art gallery; re-opening is slated for August 2016. Efforts are being made to preserve the original woodcarvings and ironwork, among other things. Because of the historical and practical value to the community—and because of great interest from eager travelers—accommodations have been made for local residents and visitors to retain access to library services during the transformation of this treasure’s outer surface.

These four magnificent buildings and many others that bear Carnegie’s name serve their communities in unique ways and help to preserve the communities’ history. Learn more about Carnegie and his philanthropy by visiting his namesake landmarks that are still making a significant mark on the lives of patrons. 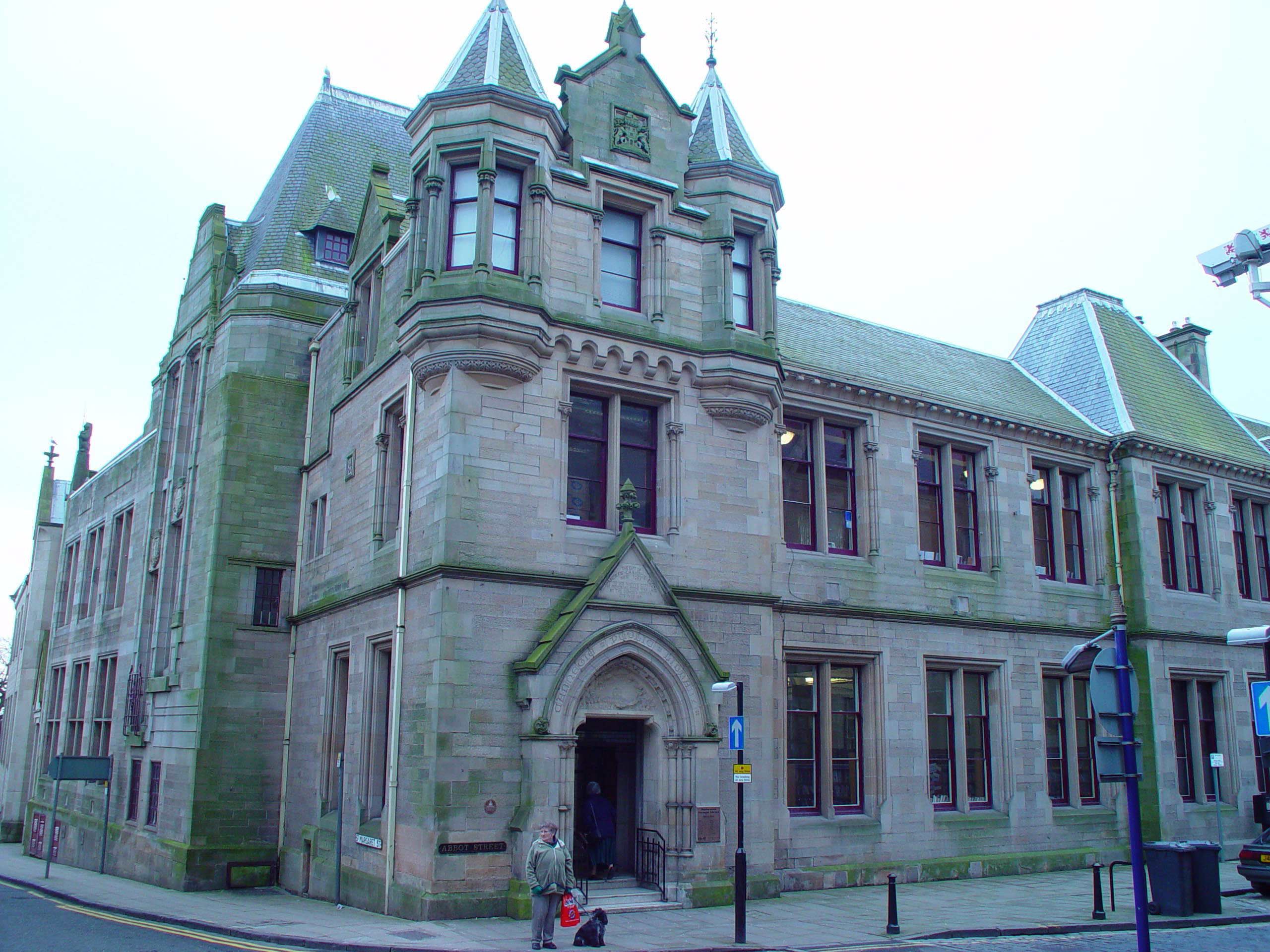 First opened in 1883, the Carnegie Library in Dunfermline, Scotland (Carnegie’s hometown), is still a functional facility. 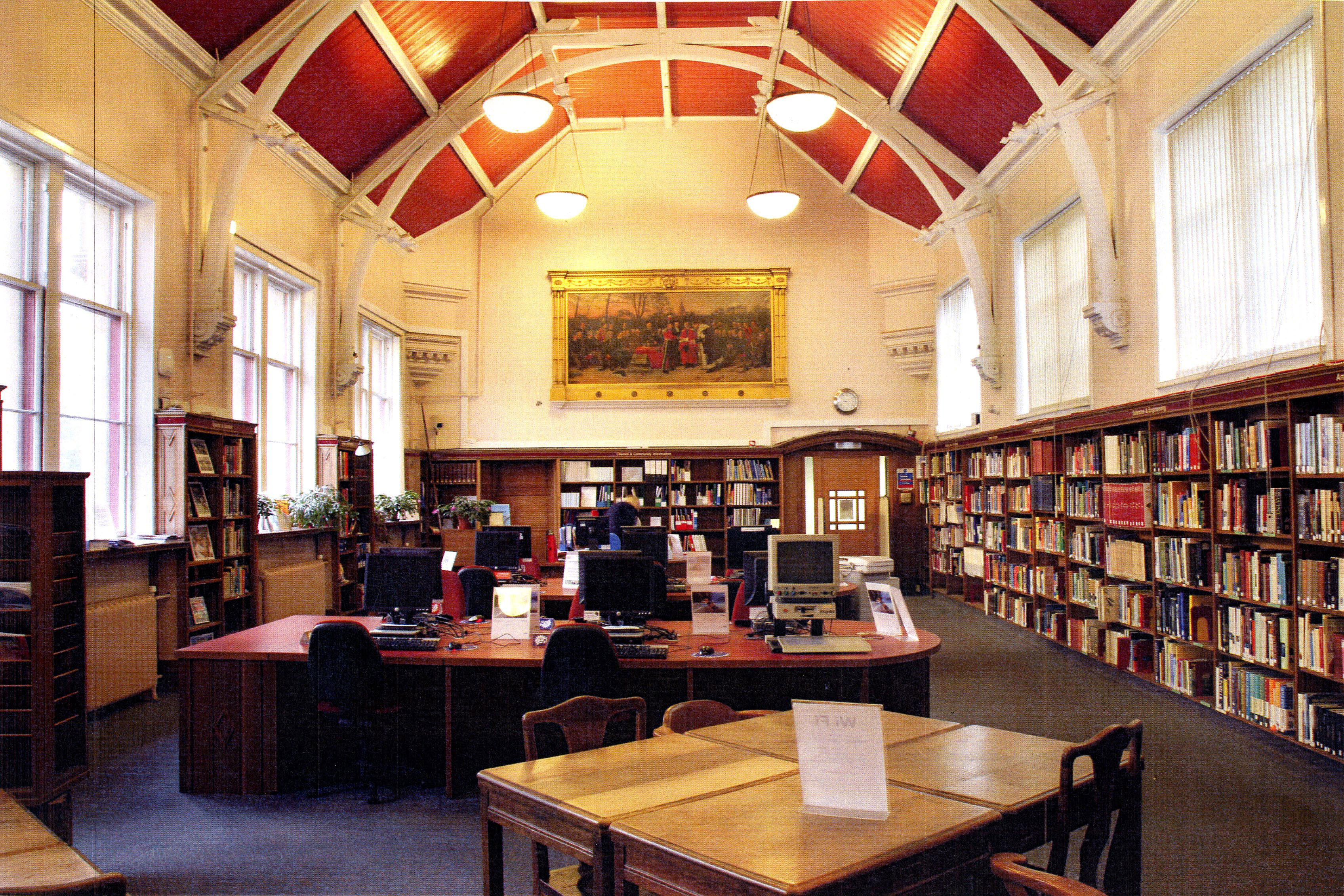 The reference department in the Carnegie Library in Dunfermline, Scotland, is both functional and beautiful.