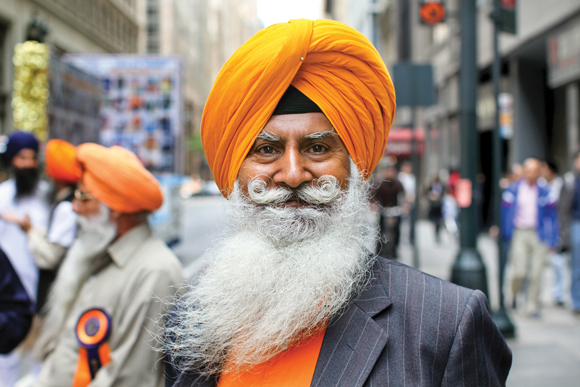 “We met in Vienna. On a train. In the snow,” says a classy couple arm-in-arm under the city lights. “I’ve been out of rehab for three months,” explains a haggard-looking man sitting on a bench. “One day you’ll feel 18, look 60, and wonder what happened,” reports an aged man looking ahead tiredly.

Each of these unique individuals is part of a photographic census created by Brandon Stanton, a photographer who came to New York City in 2010 with a degree in history, a very thin wallet, and a goal to take 10,000 pictures of people in the vibrant and diverse city. For several months Stanton photographed people all day, every day, but not much was coming of it—no one was paying attention to his work. Then one day he created a Facebook page called “Humans of New York” (HONY).

Support grew slowly at first and then, suddenly, it grew exponentially. Now his Facebook page has almost three million likes from people all around the world. At the end of 2013, Stanton released a book of street portraits (Humans of New York, St. Martin’s Press) that quickly became a New York Times Best Seller.

Stanton’s process is simple: he approaches individuals on the street and asks if he can photograph them. Then he chats with them for a minute and asks them about their day or their career or their greatest challenge or their happiest moment. The answers he receives are just as diverse as the people he photographs. He then posts each person’s photo online with a personal observation or a quotation from this brief interview.

Some responses are funny, like the girl who told the story of when her boyfriend fell down the stairs at a house party while he was looking for her. Other responses are heartbreaking, like the man who told of the recent loss of his wife and explained that sometimes he still wakes up and turns over in bed to see if she needs anything.

But the stories all have something in common: they are piercingly human. While the conglomeration of faces in Stanton’s photos reflects the diversity of the Big Apple, it also illustrates the universality of our humanity—one that reaches well past the city limits.

As part of its 10-year anniversary, Facebook made a short video about Stanton, celebrating the connections made through the platform. “I think we walk down the street, and we see all these people, and we do kind of wonder about their stories: the celebrations and the victories,” Stanton explains in the video. “That’s what people are engaging with.” He also adds, “What I hope to maintain is the culture of positivity, celebration, and support that these people share.”

That culture of support is also evident in the international community born from the Facebook page. Beyond the powerful emotional connections facilitated by HONY, the community has a huge physical impact as well. For example, in October 2013, Duane Watkins was working on a camera crew for a piece about HONY. Stanton struck up a conversation with Watkins, who told him about his family, explaining that he and his wife were currently saving for the adoption fees of their son in Ethiopia. “We already found him, but we aren’t financially ready yet.” As a result, Stanton set up a crowdfunding page in hopes of raising $26,000. By the end of the day, people had donated over $80,000.

Stanton and his girlfriend also started a program called “HONY for the Holidays.” It matches people visiting New York City over Christmas who have no place to go and people willing to open their homes. One blogger described the guest-bringing gesture as “not just a ‘plus 1,’ but a ‘plus 10,000.’” While that was a bit of a hyperbole, he wasn’t too far off. In 2012, HONY for the Holidays matched around 20 people with hosting families. With a significantly larger audience in 2013, the number jumped to nearly 20 times that amount.

Utah native Hannah Skousen has never been to New York but says the project has had a profound impact on her. “What I most appreciate about HONY are the stories that Brandon gets people to tell him,” Skousen explains. “It’s a real eye-opener to realize we may pass by hundreds or thousands of such stories in our lifetime and never realize it. This realization has prompted me to be kinder and more willing to help and listen to those around me, be they strangers or friends. HONY is a daily reminder of the brightness and diversity of humanity.”