Through the Eyes of the Everywhereist 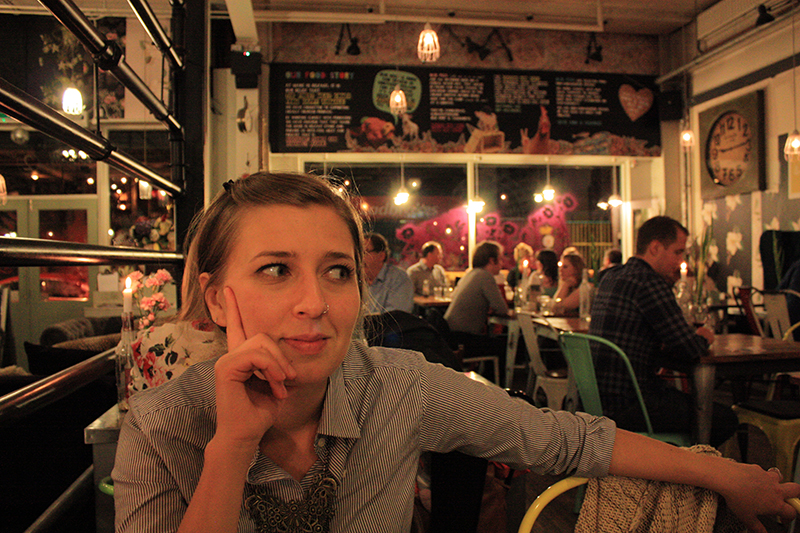 Geraldine DeRuiter was in Italy when she got the text message from her coworker: “We’re all out of a job.” It was 2008, and the toy company where she worked as a copywriter had been acquired by a larger company. At that time, DeRuiter’s husband was traveling a lot for work, and he suggested that DeRuiter tag along on his trips. She did, and one day a friend suggested that she document her experiences.

DeRuiter began writing about her travels as “the Everywhereist.” Almost five years later, she continues to share her adventures and lessons learned   with her increasing number of readers. She now receives over 3,000 visits to her blog each day.

Stowaway caught up with DeRuiter recently and asked her about this process and how documenting her experiences abroad has changed her perspective on travel.

What was your most meaningful trip and why?

I think my favorite trip was when we went to South Africa for a conference. We went to a resort in the middle of a wildlife reserve called Bushmans Kloof. There were animals all over, but they weren’t predatory animals.

Every morning the tour guides took us on a nature walk; sometimes it had a horticultural aspect, and sometimes we saw very old cave paintings. In the evening, the guides drove us around in jeeps, and we saw tons of beautiful animals that I didn’t even know existed. We had two more days in Cape Town after that, and I told my husband, “We are losing perspective because we literally have had people waiting on us.” So we did a township tour. It was a good trip. It did what travel is supposed to do.

What about the townships?

Fifteen minutes from the amazing mansions in Cape Town, there are people living without running water, toilets, even electricity. We went into one room and it looked like a dorm—there were three twin beds. A guy who lived there said, “Three families live here.” I was confused, so I asked him what he meant. He said, “I sleep on this bed with my wife and three children.” Then he pointed to the other two beds and said, “There’s a family of five there and a family of six there.”

During the township tours, we saw people who had been oppressed by their government for much of the last century. It was amazing to see the contrasts. I think it was one of the more eye-opening trips I’ve ever had.

Do you have a favorite “hidden gem”?

Belfast, Ireland, was incredible. I was a teenager in the ‘90s and grew up with an understanding that Northern Ireland was dangerous. But the trip was a great educational experience.

We found my other favorite hidden gem while on a road trip 10 years ago. We ended up in a little town and had no idea what it was. It turned out to be Ashland, Oregon, and they have one of the best Shakespeare companies in the United States. Picture yourself in Middle-of-Nowhere, Oregon, and all of a sudden there’s this cute little town with excellent theater and adorable restaurants. My husband and I actually got married there.

What was your biggest culture shock?

I would say South Africa and the townships. I mean, you have poverty in the United States, but it’s not quite like that. There’s a degree of deprivation. You have that moment of, “Gosh, we live in a country where we have everything and so much of it.” The roads are clean, and there aren’t animal carcasses clogging up our water supply.

How do you know what to pack?

The first thing I do is check the weather. That dictates footwear, and footwear dictates clothing. No more than three pairs of shoes: one completely comfortable walking pair, usually my Converse; one slightly dressier pair that I can still walk through a city in, so a pair of boots or nice flats; and one slightly impractical pair, like sandals or heels. Then I determine the clothes. My rule is—and this is kind of ridiculous—I make every top match every bottom.

Do you have other packing tips?

When you get something new, and you’re really excited about it, and you think, “I really want to take this,” sometimes you have to accept that you can’t. That’s one of the hardest things for me. Another really important thing is to never take something on a trip that you haven’t worn before. You’ll find out it’s a size too small or it’s not comfortable or—and this is the worst—it’s not actually a waterproof coat like it was supposed to be.

What do you wish you had known before about traveling that you know now?

Something isn’t bad just because it’s strange and different. Sometimes it’s good to feel uncomfortable because that’s when we learn and new experiences happen. Also, try to be amazing to everyone you meet, even if they’re horrible to you. My husband is just a good person, so he’s way better at it than I am. I always joke that it’s my “Bill and Ted’s” philosophy: “Be excellent to each other.”

Do you have any last bits of travel advice for our readers?

The last bit of advice is something that my husband told me because I have a terrible sense of direction and was afraid to venture out. He said, “Let’s imagine that you go and spend the whole day walking in the wrong direction, and you get incredibly lost. The hotel is always at most a cab ride away. So what if it’s a really expensive cab ride?” That security blanket made me a lot more comfortable.

A sunny day in Belfast draws everyone outside. Many relax on the grounds of Belfast City Hall and soak in the sunshine.