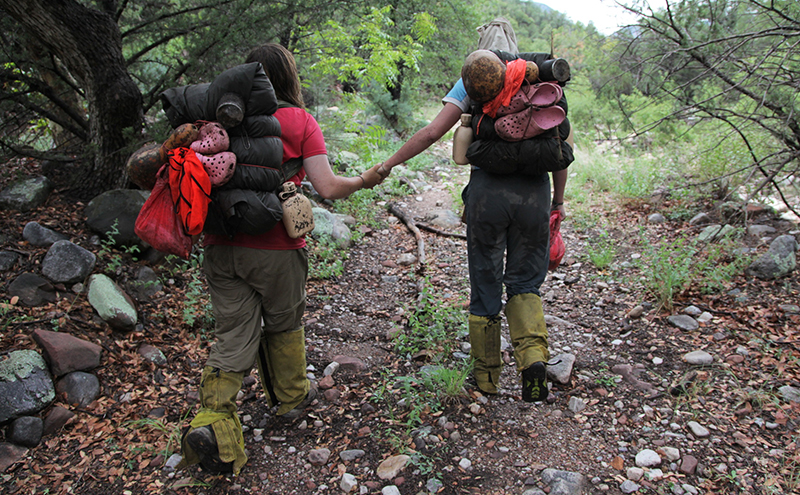 “At one point, as I was standing in waist-deep, freezing-cold water, catching kids as they slid down a steep rock wall, I remember thinking, ‘I am so fired if we ever get out of here.’”

“There were huge cliffs and scary drop-offs,” Schwendiman explains. “We ended up sleeping in the canyon on a pile of rocks with a mountain lion far away up on the ridge across from us.”

Leading her group through unfamiliar and tricky terrain, Schwendiman realized she had to step up. “It terrified me to lead the group, but I learned I am capable and can be confident in myself.”

The Purpose in Walking

The confidence Schwendiman gained working for ANASAZI is only one of the goals of this program, both for leaders and for youth. Ultimately, their time in the wilderness is meant to facilitate healing, personal reflection, and a change of heart—all without contrived situations or forced activities.

To participate in the program, YoungWalkers (teens 12–17) and Sinagua (young adults 18 and older) spend at least seven weeks hiking through Arizona’s desert wilderness. On average, three bands of two to four TrailWalkers and one to eight YoungWalkers are hiking along the trail at any given time, year-round.

Kathryn Smith, another former TrailWalker, learned about the program in a college class and decided to work for the foundation as part of her undergraduate studies. “My professor has such high praise for the foundation, saying that it is different than other wilderness therapy programs,” explains Smith. The principles of ANASAZI emphasize how to find peace, and, like many of the youth she worked with, Smith found peace on the quiet trails in Arizona’s desert.

Natural consequences along the trail help YoungWalkers return to their families with the ability to face life’s challenges with confidence.

The Role of a TrailWalker

TrailWalkers navigate from camp to camp and promote the well-being of the YoungWalkers. These responsibilities include more than just referring to the map and making sure everyone is healthy, although those are significant parts of their jobs.

Smith explains, “I learned that my role as a TrailWalker was to walk alongside the YoungWalkers as their own journeys unfolded.”

While the teens visit with assigned therapists in camp each week, much more of their time is spent alongside TrailWalkers. At first, Smith says she had a hard time understanding where the kids were coming from. “They had dealt with some really serious difficulties that I had never experienced,” she says. “I learned that they needed someone to really listen to them.”

Opportunities for Reflection and Growth

YoungWalkers are given many opportunities to learn about themselves. One of these opportunities comes early in the experience: TrailWalkers give each new member of the group a trail name that represents the good qualities they have seen in the individual. They also give each new member a letter detailing the meaning of the name. Smith’s name was Blue Bird of the Silver Wind. Wind can be a gentle influence, but it must be tempered; through her name, Smith was continually warned to measure her words so they would never be too strong. The trail name given to a YoungWalker is intended to strengthen and guide him or her in exploration of the self.

Many titles and names have special significance at ANASAZI. The term “Sinagua” refers to Native American people of the same name who lived in what is now central Arizona, and the term “ANASAZI” refers to another Native American people. TrailWalkers are called such because these youth leaders are no better than the YoungWalkers—they just have special knowledge of the trail. This symbolic use of trail names and titles allows a participant to better understand himself or herself in the context of the surrounding world.

Another chance for reflection comes in evening fire circles. Each person has a chance to talk without interruption about a specific topic chosen by any member of the group. During hikes, leaders also start discussions about a variety of topics. On other days, a silent hike allows YoungWalkers to spend time in their own minds, considering both their current situation and situations at home with friends and family.

“Wilderness therapy removes kids not only from their own environment but also from the noise of the world,” explains Smith. “Maybe these kids just haven’t ever had a moment to really think about what they want, what is right, what to do. In the wilderness, everything gets quiet.”

As the teens spend each day walking, they also learn from the natural decision-making processes required by their environment. “It is all about choices and natural consequences,” says Schwendiman. “For example, if a kid decides that he doesn’t want to hike, no one makes him hike.” But then the whole group can’t hike, and sitting around camp gets boring quickly. In the end, the YoungWalker often chooses to continue hiking. Schwendiman explains that a natural consequence, like boredom or positive peer influence, “forces the kids to think about more than just themselves.”

The YoungWalkers begin to look outward as they get to know the other members of their group and share their thoughts and feelings.

Change of Heart, Not Just Behavior

The purpose at ANASAZI is not just to change a youth’s behavior. Ezekiel C. Sanchez, cofounder of ANASAZI, says real internal change is about more than outward behavior. “We don’t have levels or steps like other programs. We’re looking for a change of heart,” Sanchez explains. “A child can have a change of heart, and he owns it.”

A true change of heart can bring youth and young adults back to their “places of belonging” and to a sense of unity with their family and parents. Family unity is the key at ANASAZI; the program’s mission is to prepare both parents and children to “turn their hearts to one another” and begin to “walk in harmony in the wilderness of the world.”

Smith found that this harmony and confidence in moving forward came to her, too, through her time with the YoungWalkers in the wilderness. “At ANASAZI, I learned that I can do a lot more than I think I can,” she says. “I gained confidence in myself and my abilities.”

And at the end of the trip across the wrong canyon, past cliffs and mountain lions, and finally into the camp at their final destination, Schwendiman didn’t get fired. In fact, she was promoted. “I was told that I had done an amazing job and that I just needed to have more confidence in my own abilities,” she says.

A Typical Day on the Trail

Early to rise: TrailWalkers and more experienced YoungWalkers know that an early start means less time walking in the heat of the day and more time resting at camp in the evening.

Breakfast, anyone? While the rest of the band makes breakfast, the lead TrailWalker goes out of hearing distance to report to the RidgeWalker (a liaison between the trail and the office in town) and discuss the day’s route.

Pack it tight: Walkers use their bedding as a pack for all of their other supplies. Each completed pack weighs about 40 pounds (about 18 kg).

Walk (or bush-whack) on: Each group spends most of the day hiking across the desert terrain of creek beds full of boulders, cliffs, freezing water, thick forests of brush, and mesas. So the trail can be more of an abstract concept than a physical path.

The sound of silence: Most days’ journeys are filled with discussions led by a TrailWalker. But sometimes, TrailWalkers initiate a silent hike to promote peaceful introspection.

Bust a coal: When the group makes camp at the end of each day’s hike, someone is responsible for starting the fire. Without matches or flint and steel, participants use a bow drill set (composed of sticks and rocks) to light the tinder on fire. With this technique, “busting a coal” requires enough friction and heat to create a small burning fiber, or coal. Making fire this way is hard work after a long day of hiking.

Standing watch: TrailWalkers take turns on night watch, keeping the fire going throughout the night on three- to four-hour shifts.