Stone Giants in China, Switzerland, India, and the USA 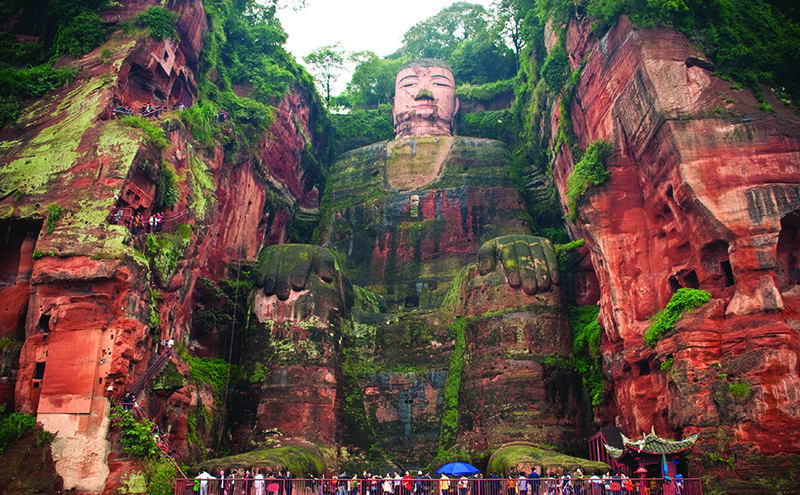 Stone giants reside around the world, waiting to be visited by tiny travelers. Whether in the form of an animal or a human, these giants humble their viewers. Each inspires awe for the unimaginable efforts of those who painstakingly carved these cliff colossi.

Sichuan Province is known as the first major foothold of Buddhism in China, so it makes sense that it would have a giant Buddha scraped out of the cliff face. This Buddha sits at more than 230 feet tall and stares over the low-lying landscape of greenery and rivers. A monk began carving the stone giant in AD 713 with the hope that it would subdue the perilous nearby river for safer passing. As the stone Buddha took shape, the river became calm. Although skeptics may attribute this change to the way the quarried rock was put into the river, the surrounding reserve is full of Buddhist temples today, and indigenous plants and wildlife thrive in this peaceful place.

In the Black Hills, just 17 miles south of Mount Rushmore, a gargantuan sculpture of the famous Sioux warrior Crazy Horse is taking shape in the mountain face. Started in 1948 by American sculptor Korczak Ziolkowski, the sculpting has made slow progress because it is funded only through nongovernment donations. When completed, the staggering sculpture of Crazy Horse will be 563 feet high and eventually feature an equine mount. Most famous for his participation in the Battle of Little Big Horn, this Sioux warrior fought against the American Civil War commander Lieutenant Colonel George A. Custer. While the sculpture remains incomplete, Crazy Horse still gazes towards the horizon with one arm outstretched, answering the question “Where are your lands?” implicitly as well as with his reply: “My lands are where my dead lie buried.”

The Penance of Arjuna

This 45-foot-tall, 100-foot-wide relief depicts two life-size elephants protecting their young as seemingly foreboding creatures pass overhead. These creatures are divinities, humans, and animals from the mythical descent of the Ganges, when Arjuna is visited by Shiva. Unlike many other large-scale carvings, the closer you get to this relief, the more detail you can see. It was carved where two large boulders come together; the crevice between them was carved to represent the river, where water was allowed to flow to add to the symbolism. More feats of artistry and realism depicting other stories can be found throughout the site, where additional large-scale carvings and reliefs can be seen.

Depicting a dying lion as a memorial for brave Swiss soldiers, the Lion Monument honors those who died while trying to protect Louis XVI during the French Revolution. Above the sculpture are found the words “Helvetiorum Fidei Ac Virtuti” (“The loyalty and bravery of the Swiss”). The lion is surrounded by beautifully manicured grounds with green trees, and a reflection pool in front of the huge reposing lion adds a ghostly effect. Under pale water lilies, the lion’s reflection appears—a haunting representation of the great beast’s transition from life to death, which can be fully appreciated only in person.

In A Tramp Abroad, Mark Twain observes, “There is a subtle something about the majestic pathos of the original which the copyist cannot get. Even the sun fails to get it; both the photographer and the carver give you a dying lion, and that is all. The shape is right, the attitude is right, the proportions are right, but that indescribable something which makes the Lion of Lucerne the most mournful and moving piece of stone in the world, is wanting.” Perhaps Twain was right. The only way you can be sure is to visit these stone giants yourself.