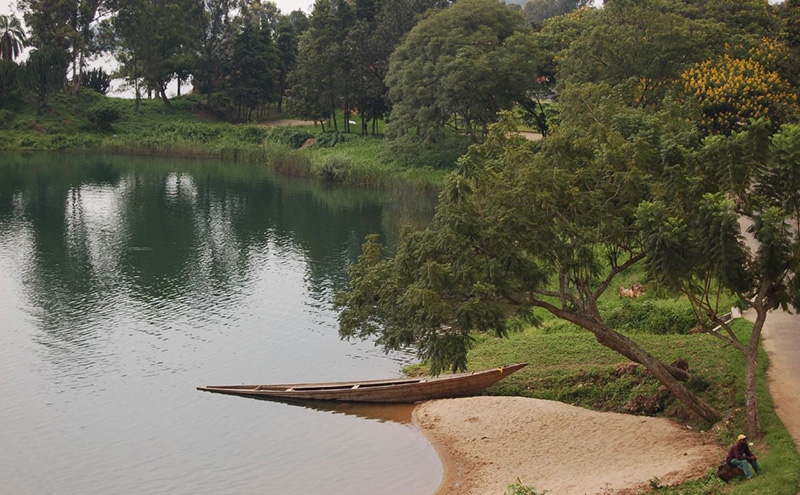 As Brady Grayson sets out for his morning run, he notices that this city is different from Kampala, Uganda, which he left the day before. Drivers of cars observe the speed limit. Motorcycle taxis have reflectors, and their drivers wear helmets. The streets are clean. As he runs through the city and toward the outskirts, he attracts the stares of many of the locals. This doesn’t surprise him. It’s not every day you see a tall, gangly white man running through the streets of Kigali, the capital of Rwanda.

An undergraduate doing research in Uganda for the summer, Grayson had boarded a bus the day before with some of his fellow researchers. They had ridden 13 hours to reach the nearby country of Rwanda. Once there, they experienced the country’s unique mix of solemn remembrance of the past and bright hopes for the future.

Nearly 20 years ago, a terrible genocide occurred in Rwanda.

Over a period of nearly three months, thousands of Tutsi were brutally killed by Hutu extremists. The memories of the victims are immortalized throughout the country, including at the Kigali Genocide Memorial Centre. The center comprises three major exhibitions: one documents the Rwanda genocide, one reviews the history of genocide around the world, and one is a children’s memorial. Visitors can enter and take pictures of the outside grounds for free, but they need to pay a fee to take pictures inside the museum or to have a guided tour.

The Hotel des Milles Collines, featured in the famous movie Hotel Rwanda, served as a refuge for over 1,200 people during the genocide. But now you can stay in one of its 112 rooms or eat at one of its four restaurants. The Panorama Restaurant is on the fourth floor of the hotel, offering modern French cuisine as well as a variety of international foods. In the evenings, you can venture over to the Pool Bar & Restaurant, where live bands entertain guests with a variety of music from oldies to Afro-Fusion. “The food was great and the atmosphere was even better,” says Grayson.

About two hours west of Kigali, one of East Africa’s great lakes, Lake Kivu, is 55 miles (90 km) long and 30 miles (48 km) wide, stretching to a depth of over 1,500 feet. The lake is unique in Africa because it has no crocodiles or hippopotamuses, so visitors can swim safely in its waters. You can hire one of the locals to take you on a boat ride and visit one of the islands, or you can rent a bicycle and tour the perimeter of the lake.

While Brady enjoys these sites, his most memorable experience in Rwanda occurs when he runs into a group of children, singing and dancing with their teacher. Clouds of dirt billow around the children’s sandals as they stomp their feet and clap their hands in rhythm. Their voices project over the valley, filling the air with happiness and energy. A zeal for life shines in their eyes, and the future of Rwanda looks bright once again.

Mirthful children in the Virunga Village pause for a visiting photographer.