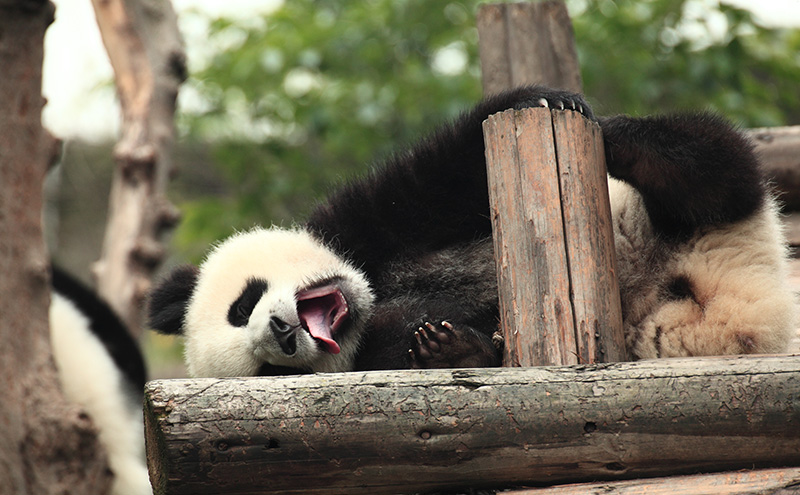 Despite being naturally found only in south-central China, pandas have endeared themselves to millions throughout the world—quite a feat for an endangered species that numbers only in the lower thousands. With so many things to see in China, many visitors overlook the pandas until they get back to a zoo closer to home. But for travelers interested in the natural wonders that China has to offer, the Panda Research Center (PRC) in Chengdu (sometimes called Sichuan) should become a priority.

Whether people love pandas because of their human-like mannerisms and expressions or their humorous pop-culture associations in things such as the book Eats, Shoots, and Leaves or the “Never Say No to Panda” European cheese commercials, this love for pandas leads many people to zoos in hopes of seeing them. But the PRC differs from zoos in that its primary purpose is the protection of pandas; it dedicates much of its revenue to studying pandas and helping them regain lost footing in their population. The PRC is also an open nature reserve and is home to pandas, peacocks, koi, and a variety of water birds.

While the PRC is a popular site for many tourist groups, the openness of the center and the number of panda habitats it provides keeps even the hotspots of the reserve from becoming as crowded as many of China’s other wonders. This openness gives visitors adequate space to take pictures or videos of adolescent pandas stealing each other’s food, of adult pandas sunning themselves, or of the less-regulated wildlife at the PRC, like the swarming koi, fighting over food from visitors.

While some travelers do stop at the lake to feed the koi and enjoy the surrounding gardens, the real reason they go to the PRC is to see the pandas. The PRC keeps its pandas in several open-air enclosures, rather than cages, that are separated from guests by moats and short walls, making the atmosphere much friendlier than in typical zoos. The pandas are divided by age, though at least one adult is usually left with each age group, making each enclosure feel more like a family room or nursery than anything else.

Visitors can time their arrival to see feeding time for the pandas. For the adolescents, mealtimes usually mean having a mini brawl, as the faster eaters tackle the slower ones in hopes of getting more food. The tackled pandas let out cries that most visitors would describe as adorable, and the adult pandas complete lack of concern about the growing dispute only adds to the humor of the situation.

If adorable brawling adolescents don’t win you over, you’ll want to check out the home for baby pandas. Visitors can pay a couple hundred dollars to hold the babies, feed them, and take videos and pictures with them. Because the panda cubs are sensitive to crowds, it’s virtually impossible to see them without paying. But the PRC also provides “panda cams” that you can watch in PRC’s park or on their website, showing both the babies and the other pandas. So even travelers who want to save money for longer-lasting souvenirs can still enjoy baby panda cuteness.

In addition to the black-and-white pandas normally associated with the name panda, the PRC is also home to red pandas, which look less like bears and more like raccoons. The PRC reduces the barriers between visitors and red pandas even further than on the other pandas’ enclosures, sometimes dispensing with the fence altogether and allowing the red pandas to climb up to the walkway.

Some red pandas run along the walkway and through the legs of visitors before returning to their trees; others decide to take naps right on the walkway. For visitors who are lucky enough to be there when the red pandas sleep on the walkways, the guards are okay with guests petting the pandas as long as the guests are gentle. Unfortunately, word of this spectacle travels quickly, and masses soon descend upon the sleeping pandas, scaring them away.

For visitors who are willing to take the time to venture away from China’s typical tourist sites, the PRC brings some of China’s natural wonders right up close and personal. Come discover what great creatures China has had since before its civilization even started.