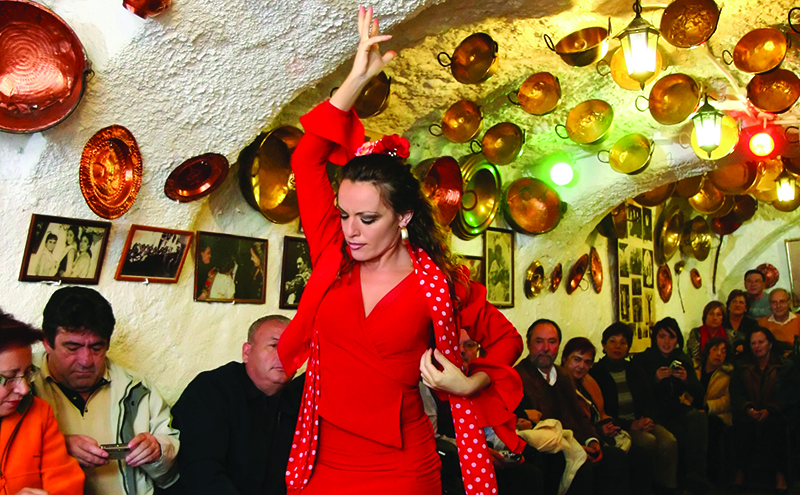 The lights are low in the small, whitewashed performance hall. Four men play quick, dramatic music on their guitars as five or six dancers take turns on the stage. The women wear red polka-dotted dresses flared at the calf, and the men wear black pants and frilled shirts. They lift their arms above their heads, clapping and stomping their feet to the beat. The younger dancers are quicker, more powerful, but the older performers carry the undeniable weight of experience. At one point, a middle-aged man comes to center stage, singing a heartbreaking song. At the climax of the song, he rips open his shirt to show his anguish.

There are maybe 50 people in the audience, most of them tourists, slowly sipping drinks. It’s warm in the room and smoky from the wood-burning stove in the next room over. Some audience members shuffle in their seats, but most pay rapt attention to the dance. Not all of them can follow the story being told, especially those unfamiliar with this particular Romani brand of Spanish, but everyone in the room can feel the beat and the passion of the music.

The dance is called the Zambra, a traditional form of flamenco danced in Sacromonte (“Sacred Mountain”), the Romani district of Granada, Spain. The Moors ruled the southern part of Spain from AD 711 to 1492, and Moorish dance, art, and music merged with that of the locals, creating the Zambra, as well as much of the rest of Granada’s rich cultural heritage.

In 1492, the Catholic Church retook Granada from the Moors and, seeing anything foreign or strange as wicked, outlawed the dance. The Romani were forced to practice the dance underground for hundreds of years, lending it the nickname “The Forbidden Dance.” Eventually, however, laws loosened, and in the twentieth century, the dance became popular with tourists. Now the Romani are once again able to dance it freely.

The Venta El Gallo is one of Sacromonte’s cave houses where tourists can see the Zambra performed.

The hall is called the Venta El Gallo (“Rooster Market”), a combination restaurant, bar, and dance parlor. It is one of many small performance halls in the neighborhood to offer flamenco shows to tourists. Venta El Gallo is one of Sacromonte’s famous cave houses, dwellings carved into the side of the mountain. From the inside, the only indications of this are the room’s low, arched ceiling and lack of windows. The atmosphere is enhanced by the low lighting and the gleam of the copper pots hanging from the white, textured walls of the room.

After two hours of dancing, the dancers all come on stage for the finale. The music builds, and the musicians’ fingers fly across the strings. The last note rings out, and the audience breaks into applause. The dancers smile and bow, breathing hard. The lights go on in the rest of the hall, and audience members chatter together excitedly. They wander out of the hall and onto the balcony, gazing across the valley at the rest of the city, lit up in the evening darkness.