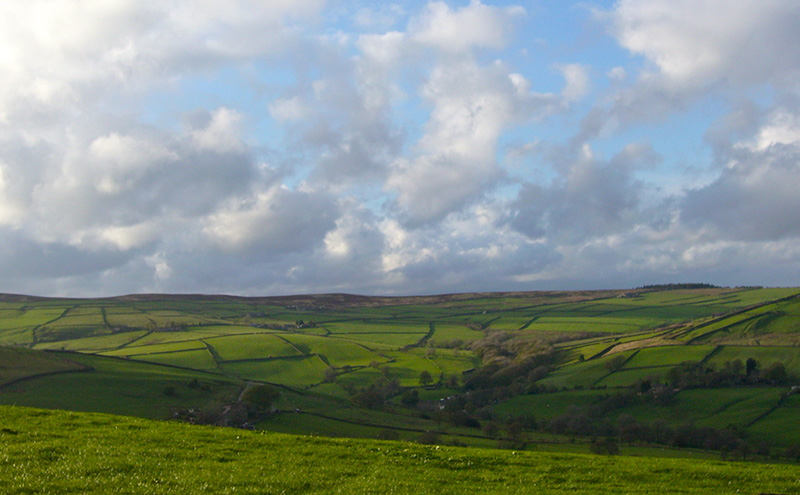 The sun is sinking into the everlastingly green knolls of the English countryside, covering the valley in a glow that makes this picturesque landscape almost seem unreal. A trail winds through the scene, a thin line of worn land in some places and nothing more than an indentation in the grass in others.

As Audrey Edholm, a BYU student from Orem, Utah, follows this trail over hills, through sheep pastures, and alongside stone walls, she can’t shake the feeling that she is in a movie. Alongside the trail is a wooden post stuck in the ground with the figure of an acorn and the words “Pennine Way” carved into its surface. Seeing this, she smiles because she knows that no matter where it is, an acorn is always a good sign—it means she’s on the right path.

One of the many signposts inscribed with the iconic acorn, indicating the traveler is still on the right path.

Acorns, the symbol of Britain’s National Trails, can be seen all along the Pennine Way. “It’s like getting little Valentines,” says Bess Hayes, a BYU graduate student from Salt Lake City, Utah, who has hiked portions of the Pennine Way multiple times on study abroad programs. Carved into the wood of a gate or painted onto a small sign, these symbols point the direction you should go.

The Pennine Way is a 268-mile walking trail that extends from Edale in Derbyshire, England, all the way to Kirk Yetholm, a village near the Scottish border. This is one of Britain’s most acclaimed national trails and was the first one to be built. It takes the average hiker 16 to 19 days to travel the entire length. But the long, winding nature of the trail makes it suitable for both long hikes and short walks, depending on what you’re up for.

The Pennine winds through miles of uninterrupted countryside, passes the occasional small town, and sometimes follows meandering farm roads. “I love that the Pennine is well-trafficked enough that you can encounter other ramblers along the way, but it’s also long enough that there are long stretches where you never see anyone,” Hayes explains. “Whether it’s the Haworth moors, the brain-like Malham Cove, or the strange garlic fairyland of Janet’s Foss, it makes me feel like I’ve been sucked into a nineteenth-century novel: it’s all magical.”

If you begin your hike in Haworth, England, you can traverse the both famous and infamous moors that inspired the Brontë sisters to write their classic gothic novels Jane Eyre and Wuthering Heights. You can even see the ruins of an old farmhouse, called Top Withins, nestled within blankets of heather. The house is believed to have been Emily Brontë’s inspiration for the Earnshaw family’s home in Wuthering Heights.

The moors ebb and flow with rolling hills dotted in dark browns, dusty tans, and muted purples. “It has an austere beauty,” says Edholm, who hiked over 13 miles through the moors. “It’s kind of a love-hate relationship.” The occasional stream can be seen meandering through the moorlands, creating hidden bogs that you must run through quickly unless you want your boots to be sucked into the mud, the moors claiming your footwear as their own. And you need to be prepared for strong winds and unpredictable rains, regular moorland weather patterns that only add to the gothic drama of the landscape.

Bring along a British coin and hammer it into this fallen tree trunk near Janet’s Foss for good luck.

Once you pass through the moors, you’ll enter a greener landscape full of a different kind of wonder—Malham Cove, a massive natural limestone formation that will impress you with its sheer enormity. This formation was once a prehistoric waterfall, but now the only water that can be seen comes spouting from below the cliffs after traveling through a system of caves that lie under the cliff. If you’re up for it, you can explore these caves through scuba diving. But if you prefer to keep your head above water, you can climb the 400 stone steps to the top of Malham Cove and gaze over miles of pure English countryside. But look down, too, because the irregular cracked surface is breathtaking in itself—magical enough to be used in the filming of Harry Potter and the Deathly Hallows, Part 1.

If the smell of fresh garlic is hanging in the air, wafting over your senses in waves, then it’s likely you’ve arrived in fairyland. The garlic smell comes from the abundance of wild garlic plants growing in the area. There is a certain mist in the air that seems full of secrets, and a soft roar can be heard through the foliage. If you continue down the trail, you’ll see a waterfall spilling into a small pool of water. This is Janet’s Foss. You wouldn’t know it unless someone told you, but behind those falls there is a secret cave where the fairy queen Janet herself is rumored to dwell. The trees surrounding Janet’s Foss are mossy, and the fallen trunks next to the trail are covered in British coins, weathered and bent after being hammered into the wooden surface for good luck. If you’re smart, you’ll hammer one in, too.

As you walk through these magical landscapes, you are certain to see sheep. Large portions of the trail go through pastures and farmland, so you are bound to eventually follow the Pennine over rock walls and through sheep pastures. “Sheep are inextricable from the experience of walking the Pennine,” Hayes says.

Sights like this mother sheep and her two lambs are common occurrences along the Pennine Way.

Besides seeing the acorn signs, you’ll also see signs for local Youth Hostel Association (YHA) hostels posted periodically along the way. There are YHA hostels in Haworth, Earby (a town between Haworth and Malham), and Malham, where you can stay along the way. They offer cheap rates; clean, quality rooms and community spaces; and kitchen facilities. At the hostels in Earby and Malham, you can literally walk straight from the trail into the door of the hostel to rest your tired feet.

And when the morning breaks over the English hills, the acorns will be there to guide you back to the Pennine. But book your nights in advance because these places fill up quickly. You wouldn’t want to be left spending the night curled up with a sheep, would you?