China’s Mid-Autumn Festival: The Light of the Moon 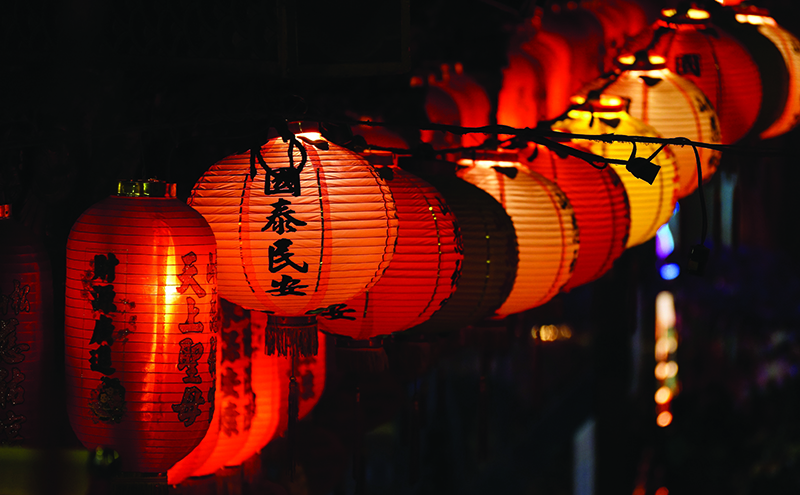 Long ago in ancient China, the sky held ten suns, which shone down all together and scorched the earth. A valiant but tyrannical man named Hou Yi shot nine of the ten suns out of the sky, saving the land from the heat and receiving a potion of immortality as a reward. His wife, Chang’e, hoped to save the world from the tyranny of her husband, so she drank the potion herself and became immortal. She floated up into the sky and joined with the spirit of the moon, and the Chinese have celebrated the Mid-Autumn Festival in her honor ever since.

Red lanterns hang from the trees on a street of shops in Beijing.

There are many versions of the legend of Chang’e, and the festival that sprang from it has just as many names. It is often called the Moon Festival because of the legend and because it’s always held on a full moon in September or early October. It is also called the Lantern Festival for the hordes of paper or silk lanterns (red for luck) that are put up around Chinese cities during the holiday like Christmas lights.

It’s also called the Festival of Reunion because, much like Christmas or Thanksgiving in the Western world, the Mid-Autumn Festival is a time when families gather together.

Zhi Wei Ma, a PhD student at Brigham Young University, says that his family in Yangquan city, China, would always try to gather and eat together during the festival. “It wasn’t cold or hot, so we generally ate outside of the house. The moon was there up in the sky, and we would just eat and chat.” When he was a child, the food was his favorite part of the holiday. His family didn’t get to eat fruit very often, but they would buy a variety of fruits especially for the festival.

Rachael Holayter from Anchorage, Alaska, experienced the Mid-Autumn Festival while teaching English in China for a semester. Holayter says her Chinese friends would “go home with their families and have a really good dinner together, spend time together.” She didn’t have any family to visit, but she and a few friends did their best to celebrate the holiday authentically. “We had our own little celebration where we sat outside, looked at the moon, and ate our little cakes,” Holayter says.

Moon cakes, popular during the festival, are round, with scalloped edges and a thin pastry shell. Many of them have whole salted egg yolks suspended in the filling to represent the moon. “I wouldn’t say they’re an actual cake,” Holayter says, “but there’s mystery stuff inside. You bite into it; it’s super thick.”

According to Zhi Wei, there are “all kinds of moon cakes, different fillings, some peanuts, some with dates, very sweet ones. I heard that there are some with meat filling, but I never tried that.” Holayter says that she likes the cakes filled with sweet red bean paste, a common desert food throughout Asia.

Supermarkets pile up boxes of moon cakes in stores to attract customers.

Supermarkets, as always, capitalize on this holiday tradition. For a full month preceding the festival, stores overflow with piles of boxes full of moon cakes for people to buy for themselves or as gifts. “Supermarkets decorate things for the customers,” Zhi Wei says. “They have lanterns and all kinds of symbols, very large signs that tell you it’s time for Mid-Autumn Day and you need to buy moon cakes.”

Yet through the bustle of the supermarkets and the excitement of the special holiday foods, the lanterns, and the signs, the true draw of the holiday is the experience of sitting peacefully under the beauty of the full moon, surrounded by loved ones.