When in Yerevan: Diverse Adventures in Armenia’s Capital 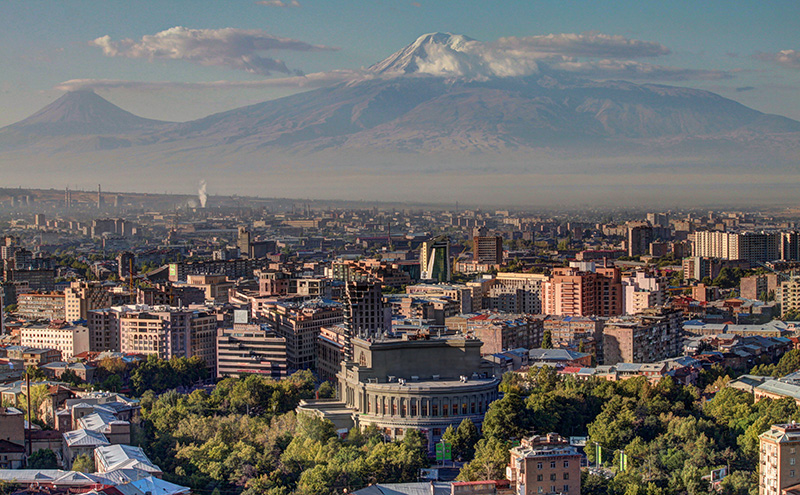 Traveling the countryside of the tiny country of Armenia seems like it should be an easy task. After all, the whole country is smaller than the state of Maryland and is utterly dwarfed by its neighbors, Turkey, Iran, and Georgia. But it is surprising how much you’ll find in such a small area. And the capital city, Yerevan, is just as fascinating as its rural surroundings.

With a history dating back as far as 783 BC, Yerevan has plenty of landmarks and hidden gems within the shadow of Mount Ararat. The city itself is surprisingly large for a country so small; almost half of Armenia’s three million residents live in its many districts (sections).

You can choose from various transportation systems to travel around Yerevan. Taxis will take you to the doorstep of your destination. Marshutnis (Armenian minibuses) provide a cheaper, more native-like experience. Or as Yerevan resident Erik Gasparyan recommends, you can hop onto the metro. This subway line runs near many of the city’s main attractions; it is also a quick and simple way to get you close to other great destinations outside its route.

Mother Armenia has watched over Yerevan since 1967.

The first stop (kangar) along the metro is located near a small underground market, an excellent place to browse for clothes, eat food, and find souvenirs. Named for the Armenian word for friendship, Barekamutyun welcomes everyone who comes by. The true treasure near this stop, however, is still a short taxi ride away: the Mother Armenia monument in Victory Park.

At the top of the hill overlooking the capital, the copper-sculpted Mother Armenia—with a sword in her hand—stands guard over the city below. The statue itself is over 20 meters tall (about 66 feet), but including the pedestal she stands on, her height reaches more than 70 meters (almost 230 feet). Since she is also built on what seems to be one of the highest elevations in Yerevan, it’s no surprise that you can see her from almost anywhere in the city. Within the monument itself is the Mother Armenia Military Museum, which honors the soldiers who served in World War II and in the Nagorno-Karabakh War, making this a truly inspiring first destination.

For travelers interested in the more city-like aspects of Yerevan, these metropolitan attractions are just a short ride away from the Barekamutyun station. After you pass through the Marshal Baghramyan subway station, the next two stops pull you into the heart of civilization. A short walk from the Yeritasardakan exit brings you to the State Academic Opera and Ballet Theater, where art and entertainment abound. You can catch a performance or merely admire the building’s structure and learn about its amazing history before continuing on to see more of the city.

Republic Square is a giant roundabout, with hotels, fountains, and many other great attractions.

At the exit for Hanrapetutyan Hraparak (Republic Square), what seems to be the largest flea market in all of Armenia blooms into view as you ascend from the depths of the subway station. The Vernissage market stretches for blocks, and huge assortment of wares. Hand-carved game boards and sculptures adorn the sidewalk, and their creators advertise every intimate detail of even the smallest curve, cut, or polish. Beautiful paintings of the Armenian landscape can transport you into a mystical forest, a mountainous terrain, or a holy place of worship.

Zoravar Andranik, the fifth stop along the metro, is where you will see one of the greatest feats of architecture in the city. Just up an escalator, across the street from the station, and up a long, beautiful walkway of stairs stands the great cathedral of St. Gregory the Illuminator. Named for the founder of the Armenian Apostolic Church, St. Gregory’s Cathedral is a giant symbol of the state religion.

“The cathedral is set up as a sign of the moral light and knowledge that Gregory brought to the state of Armenia,” says Ryan White, who lived in Armenia in 2009. “St. Gregory was one of my favorite churches in Armenia because the construction reflected modern Armenian architectural sensibilities, which make it clean, angular, open, and well-lit.”

There is more to appreciate than just the physical structure of the building, though, as Vazgen Grigoryan, a Yerevan native, points out. The cathedral is also a place for contemplation. “When I enter the cathedral,” Grigoryan explains, “I like to reflect on the heroes of the past, like Andranik and Baghramyan [Armenian military commanders] and Komitas [a famous Armenian composer].” The cathedral is a hangist (calm or restful) place to get away from city noise that lies just beyond the church grounds.

The Swallow’s Cage is a site of reverence and remembrance, as the Armenian people pay their respects to the victims of the Armenian Genocide.

Finally, no visit to Armenia would be complete without seeing Tzitzernakaberd (the Swallow’s Cage). A quick marshutni ride away from Hanrapetutyan Hraparak or Barekamutyun, this monument casting a shadow over the city and prompting the inhabitants below to remember the persecutions of the past: the Armenian Genocide. In the early 1900s, the Ottoman Empire, which ruled what is now modern-day Turkey, murdered an estimated 1.5 million Armenians by torture, starvation, and outright butchering.

Paintings, sculptures, and photographs of the destruction memorialize the dead, lining the walls and filling the centers of the three indoor exhibit halls of Tzitzernakaberd. It sometimes seems as if the only light entering this dimly lit complex is from outside, through crosses carved into the stone—a representation of the Armenians’ faith in the power of their religion to bring them out of that terrible darkness.

A fourth hall is best described as a courtroom, where condemnations of the genocide, as stated by prominent historical figures, are written upon the walls, evidence to the world of the horrors committed against this proud nation. Before you leave this hall, you have the opportunity to add your own words to a book as your call for justice; as you inscribe your words in the book, you leave a part of yourself in the museum.

Outside the museum is a wide road that follows the hundred-meter Memorial Wall. This wall holds the engraved names of Armenian cities and populations that were destroyed  during the Armenian Genocide. At the end of the road is a split steeple, wider at the base but coming to a single point 44 meters (144 feet) high; this division of the pinnacle symbolizes an Armenian people separated physically by the diaspora resulting from the genocide but united spiritually, shown by the two parts coming together. The Memorial Sanctuary looms immediately next to the steeple, a circle of 12 stone slabs surrounding the eternal flame that forever remembers the victims of the genocide.

Armenia is a small country, but from the city districts to the outlying regions around Yerevan, there is much to see. The frantic downtown rush of the city’s center, the calm and haunting aura of the great cathedrals, and the life-changing influence of historical monuments are just a few examples of the experiences this city offers. Stories and pictures cannot do justice to the significant ways each experience adds to the unique, magnificent atmosphere of the greatest city you have never heard of before.

Khor Virap is a notable monastery located outside of Yerevan―it’s where the Armenian Apostolic Church was founded at the beginning of the fourth century. Armenia was the first country to adopt Christianity as its official state religion.

In the late third century, Armenian King Tiridates III threw St. Gregory into a deep pit, to remain there until death. However, legend says that through divine intervention and with the help of the king’s sister, Khosrovidought, Gregory was able to survive in his dungeon for 13 years. During Gregory’s final year of imprisonment, Tiridates ordered the deaths of a group of virgins because one of them, Hripsime, refused to become his concubine.

King Tiridates later fell into insanity, called “pig’s illness.” Khosrovidought then had a dream that St. Gregory could heal her brother’s madness, and she ordered that he be brought from his prison. St. Gregory came forth preaching Christ’s gospel, healed the king, and baptized the king and his entire court. Christianity became the national religion of Armenia, and it has remained so for the past 1700 years.

Like most Armenians, Vazgen Grigoryan knows this story well; it stands as a reminder of divine power to him: “When you enter Khor Virap, you begin to understand the hardships Gregory faced there―and that only through the power of God was he able to rise from them, whole and willing.”

Khor Virap is about 25 miles (about 40 km) outside of Yerevan.

Khor Virap, which literally means “deep pit,” is a monument to the triumphant efforts of St. Gregory the Illuminator and his persistence even in his darkest moments. It stands on a hilltop with the majestic Mount Ararat in the background, and visitors today can descend into the very pit where Gregory was kept. Those who bring mental burdens with them may be able to ascend from that pit renewed as well.