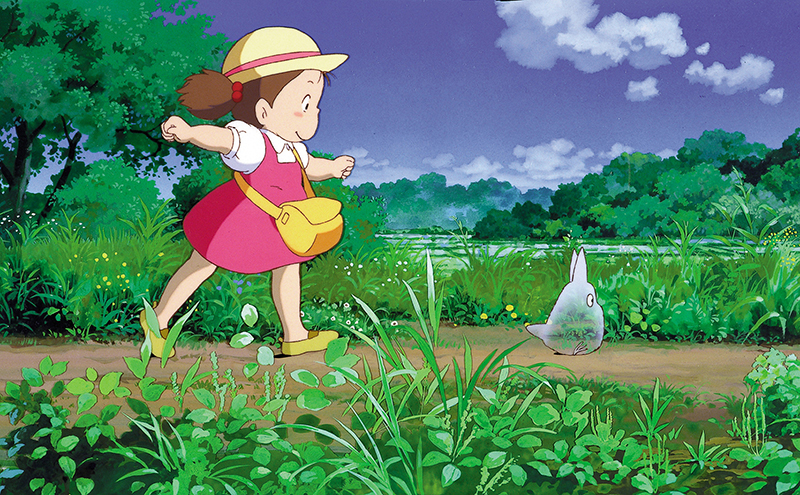 When people want to learn more about a foreign country, they usually ask someone who grew up there—someone who has breathed the air for decades, who knows the country inside and out, who looks upon the country with respect and love. This type of person is the key to learning more about the country than any book or Wikipedia page could ever tell you.

For Japan, one such person is Hayao Miyazaki.

The Legacy of Hayao Miyazaki

Perhaps no artist has spread Japanese culture with more fervor and worldwide success than Miyazaki. It may be difficult to get a personal interview with him, but his art is easily accessible to the entire world. As a filmmaker, animator, illustrator, producer, and screenwriter, Miyazaki co-created Studio Ghibli in 1985 with Isao Takahata and has been creating meaningful art ever since.

Miyazaki and his studio are famous for movies such as Kiki’s Delivery Service, Princess Mononoke, Howl’s Moving Castle, Ponyo, and especially Spirited Away, which won the Academy Award for Best Animated Feature at the 75th Academy Awards.

Miyazaki’s career began in 1963 when he got his first animation job, and he then began to showcase Japanese culture in a magical, captivating way. In 2013, nearly 50 years later, he announced his retirement following his final feature-length film, The Wind Rises.

This announcement sparked an emotional response from many people worldwide. Through his movies, he revealed the magic in lesser-known areas of Japan, showing people worlds of ancient buildings, war-ridden cities, and quiet spiritual centers.

“I feel like Ghibli is Japan’s Disney,” says Alicia Shumway, who grew up in Tokyo. “Ghibli is in my blood.”

A Love Not Limited to Tokyo

Several of his films explore colorful cities of Europe: Kiki’s Delivery Service was inspired by Visby, Sweden, and Porco Rosso features Rijeka, Croatia. Laputa: Castle in the Sky took its architectural inspiration from a Welsh mining town because Miyazaki wanted to honor the miners.

That being said, most of his movies take place in Japan. The first thing to learn about Miyazaki through his films is that he loves Japan—all of Japan. Miyazaki wants the world to know that Japan is so much more than just Tokyo.

Miyazaki has not been shy about putting his films in varied beautiful locations. Spirited Away features buildings based on those in the Edo-Tokyo Open Air Architectural Museum in Koganei, Tokyo. These pseudo-Western-style buildings inspired the scenes in the spirit world and are based on the architecture of the Meiji period.

Miyazaki was very inspired by the Edo-Tokyo Architectural Museum for the spirit world in Spirited Away.

Old, traditional locations show up frequently in Miyazaki’s films. Ponyo was inspired by Tomonoura, a town in Setonaika National Park. Tomonoura is one of the most scenic and historic places to visit in Japan. For Princess Mononoke, Miyazaki was inspired by the ancient forests of Yakushima and Kyushu and the mountains of Shirakami-Sanchi.

Miyazaki features these remote locations with a purpose, and the results are breathtaking. He ventures away from the sleek lines and towering steel buildings of Tokyo and explores small parks or wooded areas. These rich locations can even be found closer to cities—some shrines in Japan are surrounded by long walkways of forest. When you pass through them, you can feel the respect for these sacred places in the silence. The towering trees and small buildings tell you of a long history, a time before Tokyo really sprouted upward into the sky.

Miyazaki found inspiration in smaller places like these—and perhaps, with a few moments of silence, so can you.

Places of Loss and Regret

Another important element of Japanese culture that Miyazaki tends to portray is an anti-war sentiment. Miyazaki grew up in post-war Japan, after the devastation of World War II. Embedded deeply in his movies are echoes of this war and its aftermath.

There is no such thing as pure good or pure evil in his movies because war is never painted in black and white. Although Princess Mononoke’s central theme involves environmentalism, every character’s actions are justified and complex. There are no true villains in his movies, just people who are struggling or who are representing a different point of view.

The anti-war sentiments reflected in Miyazaki’s films are prevalent in Japan. To watch these movies is to get a sense of the country’s feelings about war. The most solemn city, of course, is Hiroshima.

The Hiroshima Peace Memorial Park is located in the center of Hiroshima, dedicated to the city that was the first to suffer a nuclear attack. Each year, the park, which shows the realities of war in an attempt to advocate peace, draws more than a million visitors, who come to memorialize the victims.

“The Peace Memorial and the associated museum focus entirely on the horrors of the atom bomb,” explains Chris Lowry, an American who has spent years in Tokyo. “Since Japan is the only country in the world to have had nuclear weapons used against it, the Japanese are seizing the opportunity to ask for disarmament throughout the world.

“I believe the mayor of Hiroshima still writes letters to the countries where nuclear programs test their bombs to ask them to disarm,” Lowry continues. “Even today, Japan in general is rather anti-war.” The mayor’s letters are on display at the museum, offering an intimate glimpse into Japanese feelings about war and peace.

A Center of Spirituality

Japan’s spirituality is at the very core of Miyazaki’s magic.

Almost all of his movies—some movies more than others—have magical elements. In My Neighbor Totoro, a couple of young girls befriend a kind forest spirit. Howl’s Moving Castle features wizards, witches, and a snarky fire demon. The main character is cursed and struggles to overcome this with her own self-acceptance.

Princess Mononoke’s forest gods come into conflict with the humans, resulting in a dying forest and imbalances in nature. Spirited Away is about a girl literally being transported away into a world of spirits, including a polluted river spirit, a dragon, and a creature named No-Face. She has to find her way through a new and unusual world to get back to her parents.

Several shrines can be seen in Miyazaki’s movies, like this one from My Neighbor Totoro.

Why does Miyazaki spend so much time on spirits? On magic? It’s because spirits are a huge part of Japanese culture and are thus central to Miyazaki’s work as a filmmaker.

Although their prominence varies from region to region, spirits always seem to be present in Japanese culture. Many Japanese students pray for help on exams. In places like Okinawa, people young and old pray to their ancestors. Many people carry charms for blessings such as economic health and good relationships. On New Year’s, they throw dried beans out of their door to chase away the bad spirits. Every earthquake evacuation route, includes a picture of a catfish because of an ancient belief that earthquakes were caused by giant catfish that swam beneath the land.

People also visit shrines to pray to local spirits and gods—there’s a god of snacks, a god of toilets, a god of school, and much more. They either pick a specific god or pray to the local god for help and good luck.

Many Japanese separate their spirituality from the rest of their lives, but they adamantly respect and reverence the shrines and blessings. Foreigners are allowed to take part in these as well. Miyazaki himself has said that he enjoys the Shinto water purification rituals, which involve pouring water from the shrine fountains over your hands.

Thomas Call, a student at Brigham Young University, explains how the films are interconnected with daily life. “Miyazaki shows us the Japan behind the technology and bright lights,” he says. “He lets us see the simple, traditional values of Japan—the values that influence their aesthetics and the way they tell stories and view art.”

These values, shown through their films and daily practices, show the Japanese sense of magic and spirituality that can expand the worldview of someone who takes part in them for the first time. As the cold water pours over your hands at the small washing station at the shrine, you gain a little more respect for and knowledge of Japanese culture.

The Last Page of the Book—For Now

The world can thank Hayao Miyazaki for his contributions to the realm of film and animation. His complex stories have not only entertained worldwide audiences, they have also taken deep, important, magical parts of Japan and shown that there is so much more to the tiny country than its booming capital city.

Miyazaki may decide (for the sixth time) to come out of retirement, but for now we have the opportunity to honor his legacy and to take a closer look at the country that he loves so dearly.

To Miyazaki, from the world: Thank you for showing us your home.