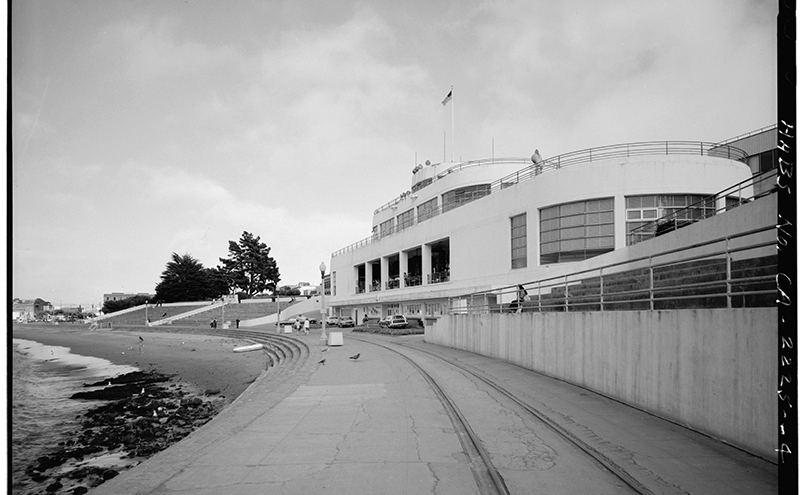 Above: While you’re catching the sun in San Francisco, make sure you check out the Aquatic Park Bathhouse for a gorgeous example of WPA-era craftsmanship.

“We are definitely in an era of building, the best kind of building—the building of great public projects for the benefit of the public and with the definite objective of building human happiness.”

The year was 1934 when President Franklin D. Roosevelt spoke these words to a nation still struggling to pick itself up after the historic stock-market crash of 1929. His controversial New Deal programs were already well underway, to the joy of some and the uncertainty of others. Whether or not people agreed with Roosevelt’s methods at that time, we are, in many ways, still benefiting from the New Deal programs 80 years later.

These programs created what FDR referred to as paid relief work—the construction of post offices, museums, parks, and schools—many of which are still around today. In spite of the historic struggle to create these spaces, most people today walk by them without realizing their connection to the New Deal.

This summer, consider mixing things up with a drive through time to see three places that exemplify human ingenuity during the time of crisis we now call the Great Depression. Fasten your seatbelt and enjoy your trip!

Our journey begins where so many people traveled in hopes of a better life: San Francisco, California. The Aquatic Park Bathhouse was constructed in 1939 as a place where swimmers could store their belongings and clean up after a long day of playing in the sheltered waters of Aquatic Park Cove.

The people of San Francisco watched as the Works Progress Administration (WPA) slowly turned what was originally called Black Point Cove into the permanent port of a building resembling a 1930s-style ocean liner. Artists working under the Federal Arts Project (FAP) created an underwater-inspired world out of the Streamline Moderne–style bathhouse using sculptures, mosaics, and murals. “Gorgeous” is the word used by the aquatic-park staff when describing this building and its art, and it certainly is beautiful.

WPA artists created whimsical underwater scenes on the walls of the Bathhouse.

Artist Hilaire Hiler (1898–1966) was the head artist on the project of creating this mural.

Eventually the nightclub was shut down, but the building never fully recovered its original purpose. Instead, it housed a number of different organizations, including the US military during WWII, a maritime museum, and a private senior center.

Today the bathhouse building, now part of San Francisco Maritime National Historic Park, is still home to several museum exhibits, offices, and the San Francisco Senior Center. Bardi says that efforts have been made to maintain the building’s original architecture—and that some of the staff members get to enjoy the addition of a sink or drain in their office as a remnant of the WPA’s work on the building.

It’s well worth the trip to San Francisco to see this spectacular building and its artwork for yourself. While you’re there, you can tour the rest of the Maritime Historical Park, which includes Hyde Street Pier and its collection of historical ships. If you’re really feeling adventurous, you can visit the two historic water-sport clubs (Dolphin Club and South End Rowing Club) that call the bay home—and you can brave the bay’s chilly waters for a swim.

Toledo Zoo, Ohio: A Landmark in the Community

Next on our road trip through time is the Toledo Zoo, where you can find more than 9,000 animals representing 800

different species. This monumental zoo got its start in 1900 with the donation of a woodchuck to Toledo’s parks board. That little woodchuck inspired big plans in Toledo for a world-class zoo.

But the Depression hit the Glass City especially hard, and those big plans were put on hold as funding became scarce. Through the involvement of alphabet agencies like the WPA, however, the city of Toledo was able to put its abundance of unemployed, skilled laborers to work to create the incredible buildings that you see today, including the reptile house, amphitheater, museum of science, aquarium, and aviary.

“Music Under the Stars” is one of many events featured at the Amphitheater.

The Aviary is a beautiful summer spectacle.

The zoo staff has worked hard over the years to preserve the original structures and artwork and to incorporate them into everyday zoo life. Only the aviary and aquarium have undergone serious renovations since their original construction.
If you look carefully, you can see the artwork of more FAP artists making things homey for the animals with habitat murals and sculptures located throughout the zoo. In the 1990s, the zoo invited one of the original painters, Mr. Forest “Woody” LaPlante, to restore some of the old murals on the walls of the reptile house. Another artist, sculptor Arthur Cox, is featured in a favorite zoo tradition: you haven’t truly been to the zoo until you’ve taken your picture with the stone bison and bear statues located by the exhibit of the sloth bears.

If you’re visiting the zoo in July, you can get up close and personal with one of the original WPA structures—the amphitheater—where the zoo holds a free annual “Music Under the Stars” concert with the Toledo Symphony Concert Band. Additionally, the zoo offers great 21-and-over activities like the Rock N Roar Dance Party and the ZOOtoDO food and entertainment fundraiser that you can attend in addition to visiting the lions, tigers, and bears.

Ohio resident Shawn Kebker says that most of the residents of Toledo and its neighboring cities make the trip in the winter to see the Christmas lights at the zoo (“the Christmas experience in Toledo”), but that the best time for seeing any animals is during cool summer days, when they are more likely to be walking around.

More than a century after receiving its first donated woodchuck, the Toledo Zoo has realized the dream of being a landmark in the community and a home for some fantastic animals.

Here’s an inside scoop from Kandace York, Toledo Zoo Communications Coordinator, on the buildings at the zoo:

The last stop on this cross-century road trip is Doubleday Field, “the home of baseball.” Working on the assumption that Abner Doubleday invented baseball (which is now generally accepted as a myth), Cooperstown, New York, converted a farmer’s field into a playing field, and the plot of land saw its first game of baseball in 1920.

Just over a decade later, the WPA stepped in to help make the field a more permanent home for the all-American pastime. They graded the field, installed fences and a new diamond, and landscaped the entrance. The WPA continued to work on the field a few years later by constructing a steel and concrete grandstand and by working on the stone masonry of the structure.

While you’re in Cooperstown, check out one of the many games that are played during the summer on Doubleday Field.

Some people at the time disagreed with the choice to use already scarce funds to build recreational facilities when so many other projects needed to be completed. However, according to authors John Wong (“FDR and the New Deal on Sport and Recreation”) and Robert Kossuth (“Boondoggling, Baseball, and the WPA: Cooperstown’s Doubleday”), these recreational projects were actually very popular with the WPA because they provided immediate and temporary jobs that didn’t keep workers from “seeking permanent positions in the private sector.”

Doubleday Field was completed in 1939—just in time for the Cooperstown Baseball Centennial to be played in honor of the 1839 “creation” of baseball and for the first induction ceremony of the Hall of Fame built just down the road from the field.

The wooden seats on either side of the grandstand have since been replaced with aluminum seating, but you can still sit on the original WPA grandstand and watch a game even today. The field has hosted the Hall of Fame Game (started in 1940 and running until 2008), which brought two major-league teams together in a unique in-season, off-the-record annual game. More recently, the annual Hall of Fame Classic now takes place every Memorial Day weekend. Don’t worry if you miss the big game, though; there’s always the Hall of Fame weekend in July, which begins on the field.

And if you’re hoping to get a more personal game-watching experience, you can pick from one of the many games played on the field over the course of the season; these games are scheduled on a first come, first served basis for interested teams.

Jim Gates, a librarian at the Hall of Fame, says that approximately 120 Hall of Fame players have played on Doubleday Field at one time or another. It’s certainly worth the trip to visit an all-American site with a home-run history.

The end of the road arrived for many of the New Deal programs with the beginning of WWII, which created jobs for Americans and effectively ended the Great Depression. However, FDR’s dream of building human happiness lived on and was more successful than he might have first imagined. On the foundations laid by that “era of building,” we have continued to build. As we build, we can look back and thank those who came before.

It’s true that you could visit any of these three places and enjoy them without knowing their stories. But the knowing makes the visit much more meaningful.

A few other New Deal projects: