“Going” Abroad: Toilets Around the World 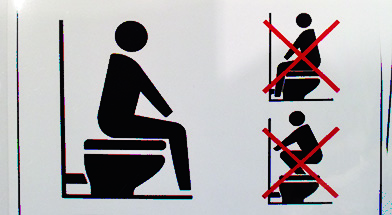 We all have to go sometime. But while many travel locations pander to their tourists’ wishes, it is almost inevitable that you will have to use local styles of toilets at some point. Here are a few things you can expect while “going” away from home.

Pick your own paper—some places leave you not so high and dry.

Some countries use sitting toilets almost exclusively. Even commodes located far off the beaten path will offer something to sit on—be it plastic, porcelain, metal, or wood. These might use a bidet or toilet paper or both. After you use the paper, you are usually supposed to put it down the drain with the rest of the waste. If not, there will be a trash can nearby for used paper. Many facilities that expect lots of traffic or that want to promote hygiene now use motion sensors to activate everything from toilets to sinks to towel dispensers.

Minimalism is the watchword of many countries’ simple squat toilets. At first you may mistake them for oddly shaped drains, but these are in fact the receptacles. Some of these toilets lack a flushing mechanism. In these cases there will likely be a hose or showerhead nearby for you to wash out the toilet and to use as a freestyle bidet.

Some restrooms are unisex. At the very least, you may be directed to the section intended for the opposite sex if your side gets too crowded. The toilets themselves can be of the sitting or squatting variety.

One thing you should not always expect is privacy. It is not unheard of for large public restrooms to have toilets separated by only a very short wall. And if you don’t bring toilet paper with you, you won’t have any.

Remember that you may have to pay to use the restrooms. The fee is often collected by an attendant, or the restroom itself may be an automated booth. Some look like coin-operated Port-A-Potties but are in fact much cleaner than you might expect because the inside goes through a wash cycle between each customer.

Don’t feel pressured to use all the buttons at once.

If you treat the toilets in some countries like any other seated model, you would be missing out. In Japan, for example, standard features include heated seats and built-in bidets. And you may even find special features like white noise generators, music, deodorizers, video games, or computerized models that email your doctor about the sugar levels in your urine.

Not actually a sink

When I first saw the sink next to the toilet during my trip to Italy, I was confused. After some contemplation, I decided that it must be for hand-washing clothes. So I grabbed my running clothes and got to work. Then I pinned my clothes up to dry.

I was proud because I’d figured out the purpose of the other sink by myself. At dinner that evening, I offhandedly mentioned something about it to Vito, my host, expecting him to confirm my conclusion regarding the sink.

But Vito started to laugh. Uneasiness began to settle in my stomach.

“So you found the bidet?” he asked. “I don’t think they have those in the States.” He laughed again before continuing. “All of the houses in Italy have them in the bathroom. It’s for―” he paused, mulling over what to say next. “When people go to the bathroom, they use the bidet afterwards to wash themselves. It’s a sanitary procedure.”

And I washed my running clothes in it? “You mean they wash their hands, right?”

A grin escaped the corner of his mouth. “No, no. Their bottoms.”