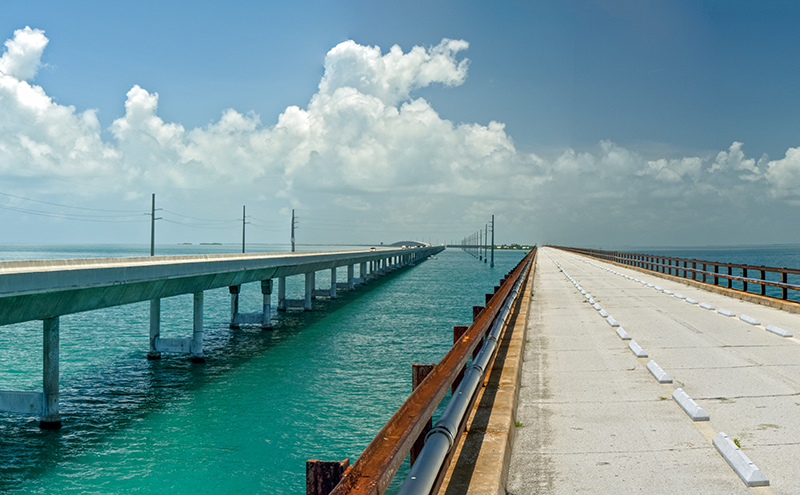 The Overseas Highway connects Florida’s mainland to the Key Islands. The highway itself is impressive, spanning more than 100 miles and including 47 bridges. But beyond that, it’s a great way to see some of the best sights Florida has to offer.

Most world-famous roads are known for drops and curves that nauseate drivers; in contrast, the Overseas Highway is for Sunday drivers. The top speed across the Florida Keys is 55 mph. But what this drive lacks in speed and difficulty, it makes up for in the sheer beauty and variety of its surroundings.

Put on your sunscreen and rent a convertible because this is one drive you will not want to miss. You can spend a full day going from Key Largo to Key West and back, or you can spend days on each island chain and avoid the mainland for weeks.

The Overseas Highway originated as a railroad in 1912. After the railroad was deserted in 1935, construction of roadways spanning the islands was completed in 1938. In 2009, the Overseas Highway received the award of All-American Road, the most prestigious prize for roads in the United States.

Summer comes early in Florida, and the best time to take this trip is in April or May. If you need to travel near the end of the year, skip the hurricane season and travel during September and October.

Because of the unique layout of the Florida Keys, locals use the Overseas Highway as the main street of a 100-mile-long city, and addresses are a little tricky. The entire Overseas Highway is lined with mile markers that start counting down as you go south from Florida City. Markers start at 127 and go all the way down to 0 at Key West.

The Overseas Highway provides a passport to places both above and below water that are home to a wide variety of species of plants and animals.

Located at mile marker 108, Key Largo is the longest island and the first one off the mainland. It is home to John Pennekamp Coral Reef State Park, a completely submerged park and the first of its kind in the United States. The park offers snorkeling, scuba diving, and glass-bottom boat tours, as well as boat and kayak rentals.

The water is crystal clear, allowing beginning snorkelers and divers the chance to see vibrant coral and marine life while more experienced divers can explore the Spiegel Grove, a 510-foot ship about six miles offshore. Visiting the haunting ship in the reef is a unique experience for divers.

About 18 miles down the Overseas Highway lies Islamorada at mile marker 90. Islamorada is known for world-class fishing, and you can also visit the Theater of the Sea and watch a live marine or bird show. Perhaps you’ve always wanted to swim with dolphins, sea lions, turtles, rays, or even sharks! On Islamorada, you can.

Consider diving to the San Pedro, a Dutch ship that sank in 1733 and was rediscovered only 50 years ago. Back on Islamorada, you can wander through tropical nature trails full of life or tour the renowned History of Diving Museum.

We’re now halfway through the Florida Keys. After you pass mile marker 63, the next area of the Keys is called Marathon. Known as the most family-friendly of the Keys, this island provides more opportunities to swim with dolphins, with the added bonus of the white sand at Sombrero Beach.

This is the closest you’ll get to the mythical Kokomo made famous by the Beach Boys, so find a steel-drum band and buy a tropical drink while you soak up the sun. While you’re taking it easy, Marathon also offers golfing and museums.

Every April the bridge is closed and a “fun run” takes over for the next hour and a half. Surrounded by water, 1,500 runners participate in this event to raise money for youth athletics on the Florida Keys. Additionally, you can run or bike across Seven Mile Bridge any time of year.

Watch for Key Deer on the road when driving through Bahia Honda!

After you exit Seven Mile Bridge at mile marker 37, one of the first islands you encounter is Bahia Honda. Some of the best beaches on the Keys are here. Bahia Honda and the following 30 miles of islands are known as the Big Pine Key and the Lower Keys.

If you’re in the area in July, check out the Annual Underwater Music Festival. That’s right, it’s an underwater concert for anyone willing to dive or snorkel long enough to watch it. Musicians “play” copper instruments for their underwater audience in a benefit concert for coral preservation. Big Pine Key is also home to the National Key Deer Refuge. Key deer average, as adults, about 2.5 feet tall at the shoulder, roughly the same size as a large dog.

Thirty-three miles down the road from Bahia Honda is Key West, arguably the most popular and metropolitan island in the Keys. It starts at mile marker 4 and stretches four miles to mile marker 0, where a surprise awaits you—you are now closer to Cuba than you are to the continental United States. The classic tourist spot is at “Southernmost Point,” where you will find a final marker stating that you are only 90 miles from Cuba.

Key West is a vibrant island with warm sand and tropical beaches, and it is also a historic area with the highest density of wooden houses in the nation. It was once home to many famous authors like Ernest Hemingway and Tennessee Williams, and you can still roam streets similar to the ones these cultural icons would have walked. Take your time on Key West.

Leave your cares behind, because nothing beats a party at sunset on the Florida Keys.

Heading back to the mainland from Key West is a bittersweet experience. It’s a chance to see what you may have missed on the way, but it means leaving the sunny skies and warm waters. Leaving is the only thing you’ll regret after traveling down the Overseas Highway.