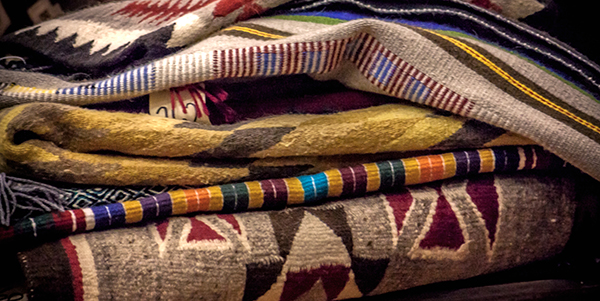 The weaver deftly maneuvers the pile of yarn at her side horizontally between the warp and quickly tamps down the red string into sharp lines against the previous row with four rhythmic taps. Preparing to lay down another weave, she separates the strings with a sweep of her hand as if she were playing the harp.

Again and again she repeats this process, each movement quick, precise, and fluid. The woman patiently weaves, knowing that her creation may ultimately take an entire year’s dedication or more to complete.

The Navajo preserve their generational connection to the past as they continue their centuries-old weaving tradition.

For more than two centuries, Navajo rugs and blankets have fascinated the artistically minded with their exceptional craftsmanship and stark, stunning beauty. This uniquely American art form fetches high prices and is held in high esteem as one of the finest weaving traditions in the world. But surprisingly, the Navajo have a relatively young weaving tradition.

The Navajo began weaving when the Pueblo peoples to the south sought refuge from Spanish and tribal conflicts and brought with them their weaving tradition. Improving upon the Pueblo method, Navajo weavers became universally recognized as the best and most innovative in the West. Rival tribes sometimes risked their lives to trade for a Navajo-woven blanket, which sold for astronomical prices—as much as four years’ salary for an army captain.

Despite difficult times and social upheaval, the weaving tradition is still strong today in the Navajo homelands of the Four Corners area in the southwestern United States. Herders still run the now-rare Navajo-Churro breed of sheep in the hills of Four Corners, and weavers still harvest wool, make yarn, and produce striking examples of a vibrant traditional art form.

This beautiful and storied tradition is far from being just history, and blankets aren’t just found in expensive museums. Contemporary weavers and willing teachers passionately keep this artisan tradition alive in the Southwest.

Hoping to experience modern Navajo weaving, 25-year-old Kess Larsen visited Los Ojos, New Mexico—a locus for contemporary Navajo weaving. Arriving after dark, Larsen parked her dusty car in front of the building marked Tierra Wools and introduced herself to one of the friendly owners waiting there.

The weeklong weaving course at the small shop and the stay at the owner’s neighboring casita had been a gift for Larsen from her parents. After settling in, Larsen slept comfortably, dreaming of the blanket she would be making the next morning.

The next day she learned all about the rare Navajo-Churro sheep herds, the hand-spun and dyed wools, the looms, and the blankets, rugs, and tapestries. After studying the many dyed wools, Larsen was immediately drawn to browns, greens, and dark blues, but the “dusty, rosy pink” she had first chosen “just wasn’t working” in the combination. So she “nixed the pink and threw in yellow and absolutely loved it.” After finding the perfect shades of wool, she finished plans for her simple banded design and began her work at the loom.

With friendly guidance and encouragement from the three women tending the shop, Larsen began to weave, growing in confidence and speed as she passed the shuttle back and forth hundreds and hundreds of times, resting only to take breaks walking and reading in the hardy low hills. At the end of five days, Larsen eagerly detached her small blanket from the loom, held it up, and then wrapped herself in it. She thanked her teachers for an unforgettable experience. “The lady told me I did such a good job I need to find a weaver’s guild in my area,” Larsen reports. “I had so much fun doing it. I really did.”

Larsen drove home feeling elated and contemplative. Although the temperature was quite comfortable in her car, she cranked up the AC and wrapped herself in the blanket, thinking of ancient weavers and feeling grateful for her newfound connection to them. “The experience made me want to live a life in a valley somewhere just weaving,” Larsen explains. “I considered dropping everything and becoming a weaver.”