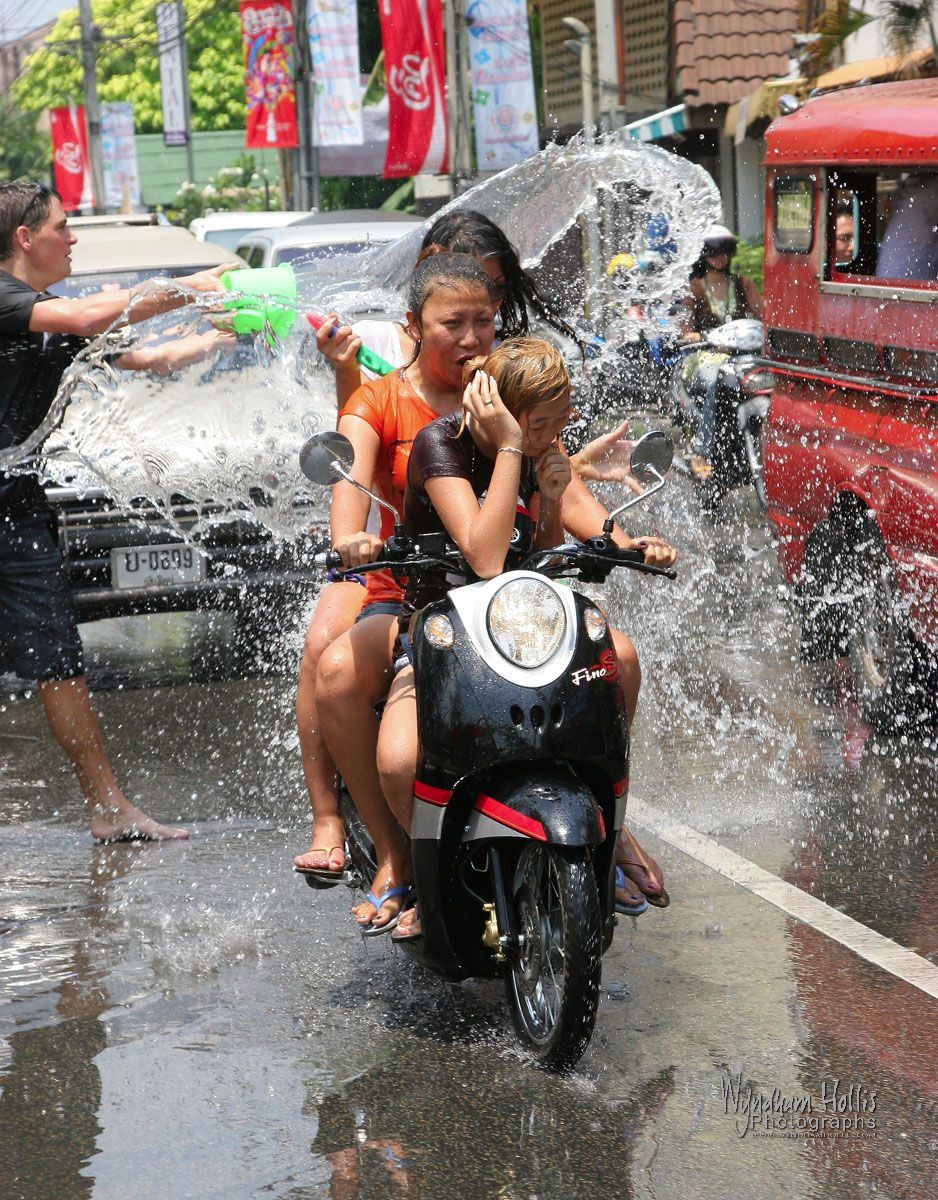 During one of the hottest and most humid months of the year in Bangkok, Thailand, Nikhita Bhatia sits in the back of a truck in heavy traffic while the merciless sun beats down upon her head. Beads of sweat slowly drip down the side of her face. As the truck comes to a brief stop, she is bombarded with buckets upon buckets of ice-cold water from the passengers in a neighboring truck, instantly cooling her down and giving her goose bumps from head to toe. But without missing a beat, Bhatia picks up her own water bucket, armed and ready to fire back.

Welcome to the Songkran festival (April 13–15) in Thailand, a New Year’s celebration recognized worldwide for a unique tradition: massive citywide water fights lasting up to six days in some locations. The object of the water fights is simple—get anyone and everyone you see soaking wet. It doesn’t matter if you use a bucket of water, a hose, a cup, or a water bottle—during Songkran, it’s all free game.

Maliwan Salmon, who grew up in a rural part of Thailand called Yisang, remembers Songkran as a time to spend with family and to splash water on strangers. “When I was young, Songkran festival was when everybody who went to work in the big cities or any other place would come home to gather with their family,” Salmon explains. “Little kids would get up early and have their parents put a big, heavy bucket next to the road so the kids could spray people who passed by.”

Today, travelers come from far and wide to participate in the famous Songkran celebrations, where a typical day in Bangkok might include strangers splashing water on policemen, shop owners, motorists, and anyone else who crosses their paths. It’s a day for fun and festivities—but if tourists really want a taste of Thai culture, they’ll have to look beyond the water buckets and hoses.

Though it may be fun to completely soak random strangers, Bangkok native Nirotha Chandee says that traditional Songkran celebrations are much different. Throwing water is still involved, but the meaning behind it is more religious in nature. Traditionally, Songkran was a Buddhist holiday held to celebrate new beginnings. Throwing water wasn’t entirely for fun—it symbolized a cleansing period and a renewal.

“We would have to wear Thai dresses; men and women wouldn’t really touch and would throw water at each other at a really respectable distance,” Chandee says. “It’s not much of a water fight—it’s more like gathering the family and paying respect to our elders. We pour water mixed with jasmine flowers into their hands, wishing them long lives, while they bless us in return.”

The elders Chandee mentions can be friends, family members, or monks. To get a true taste for Thai culture, Bhatia recommends that tourists participate in Buddhist cele-brations at nearby temples, known as wats, by doing a prayer ceremony and putting some rosewater (a fragrant Thai water) on a Buddha statue. In turn, Bhatia says, Buddha will bless you with good fortune in the year to come.

Songkran festivities draw crowds of all ages to the streets to ring in the new year in a wet and wild way.

Though the well-known traditions of Songkran involve throwing water, cleansing Buddha statues, and paying tribute to elders, in other parts of Thailand, Songkran carries some lesser-known traditions as well. Some carry handfuls of sand to their neighbors in order to represent and compensate for all the dirt they will carry on their feet during the year; others deep clean their house as part of the cleansing period. But throughout the country, the traditional mentality is still the same: the new year is a time for cleansing and renewal.

The water fight aspect is still part of the Thai culture; it’s just a more modern take on the holiday. In order to get a good mix of the celebrations and a true understanding of the holiday, start out by visiting some of the popular Buddhist temples to pay tribute and show respect. Then afterward, grab a bucket, fill it up, and get as many people as possible dripping wet from head to toe with ice-cold water.