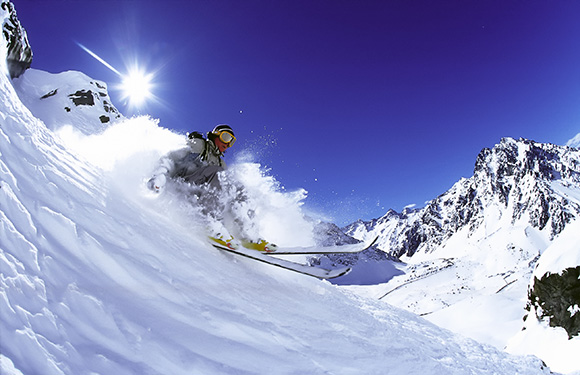 Need a fresh idea for weekend activities during your Chilean study abroad? Bored on your business venture? Wishing for one more week of good skiing? Portillo’s got you covered.

The ski season of 2005 was coming to a close. Although Larry Kacher was usually disappointed to see Utah’s great powder melt away, that year he wasn’t bothered in the least. In fact, he was looking forward to doing some of his most exciting skiing during the summer. That’s because he and his snowboarding son had decided to extend their winter sports season into the summertime by skiing in the Andes mountain range of Chile. “The thought of skiing and snowboarding in July sounded like way too much fun to pass up,” admits Kacher.

In business for more than 60 years, the Portillo resort in the Chilean Andes is the oldest ski area in South America. This resort includes 14 lifts and is really “the fulfillment of a dream,” according to owner Henry Purcell. Originally a railway built by English engineers on skis, this charming railway-turned-resort has been kept free of commercial expansion and distractions: no town, no shopping centers, no restaurant chains. Today, only one big yellow hotel, one beautiful ski mountain, up to 450 guests, and 450 energetic employees occupy the community. Other than that, Portillo is snow and slopes as far as the eye can see.

The Andes is the longest continental mountain range in the world.

And the slopes are pretty enticing—after all, how many people can say they’ve been skiing in the Andes? This mountain range lies deep in the southern hemisphere, roughly in line with Cape Town, South Africa, and Sydney, Australia. Winter runs from June to September here, meaning that when things start melting in the northern hemisphere, the snow is just getting good in Portillo.

Portillo is a popular destination for skiers and snowboarders because it not only allows for winter sports during the summer, but it also includes some amazing cultural experiences and delicious food. In August, Portillo dedicates an entire week to showing off an array of South American cuisine in nightly three-course meals, a tradition called “Flavors of the Pacific.” The resort even has an annual torchlight parade, providing guests with the opportunity to ski while carrying a torch. The glowing line of light down the mountain creates a lasting memory.

The resort has a pool, hot tub, fitness center, spa, game room, and many restaurants.

Because the resort is nestled right above Chile’s capital, Santiago, locals and travelers residing in the area can easily take inexpensive weekend trips to enjoy an entirely different side of South America. For the resort guest, taking the adventure hike from the resort to Santiago also makes for an exciting trip—if you’re brave enough!

Even without all the cultural opportunities, most skiers and snowboarders would beg for this experience simply to extend their seasons. Kacher agrees that it’s worth it, saying with a shrug, “There’s something refreshing about carving up fresh powder while friends back home sweat through another hot afternoon.”

So instead of dreaming about the next winter season, make it happen this summer. Pack your warm winter clothes into your suitcase, not your closet. Then get a reservation at Portillo resort for the coolest experience you’ll find in South America.