Savor the Flavor of the Crescent City: Cajun Food Outside of New Orleans 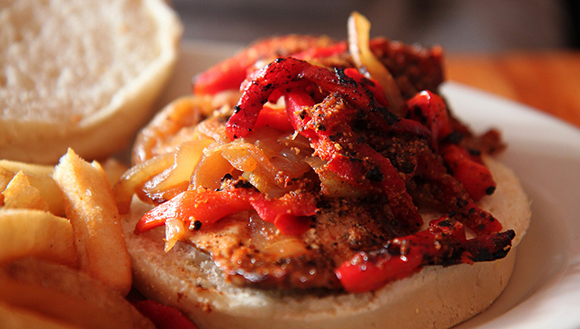 Walking into the restaurant, guests are immediately greeted with a whiff of onion, garlic, and cayenne pepper. Their ears fill with Louis Armstrong’s scatting. Dimly lit lamps tinted with vibrant colors hang low over the café-style seating. Guests might as well be in New Orleans—all that’s missing is the humidity.

But Boudreaux’s Bistro isn’t in New Orleans, the “Crescent City.” This Cajun bistro is in Payson, Utah, an hour south of Salt Lake City. It’s one of many New Orleans–influenced eateries that are popping up in cities all over the United States. The owner’s goal is to show his guests that Cajun food is an experience, not just a flavor—and that taste is good no matter where you get it.

Centuries ago, French Canadian settlers emigrated to what is now southeast Louisiana and brought with them a love for blended spices and seafood. Over time, several different cultures combined their culinary styles with these French Canadian flavors, and Cajun food became central to a new culture.

New Orleans native and owner of Boudreaux’s Bistro, Chris Sorensen, explains what technically defines food as Cajun: “The main ingredients are what Cajun chefs call the trinity: onion, bell pepper, and celery. They call garlic the pope.” The Cajun trinity may qualify a dish as Cajun, but the flavor rarely stops there.

New Orleans recipes are also famous for their cayenne pepper, crushed red pepper flakes, and colorful blends of several spices. But Sorensen emphasizes that although “people automatically think that Cajun Creole food is way too spicy,” it’s not really. “It has a little bite to it,” he explains. “But if it’s too hot, then it’s not cooked right.”

Cajun chefs often pair spicy flavors with beans, rice, and vegetables in stews or other dishes to give the spice a hearty base. If you’ve ever experienced a real Cajun dish, you’ll know that the flavor is unmistakable and well worth a trip to a Cajun restaurant like Boudreaux’s.

In recent years, Cajun food has become so popular that most Cajun restaurants have joined forces with another food genre found in Louisiana: Southern food. This new Cajun-Southern hybrid genre is popular both inside and outside New Orleans. In his Utah bistro, Sorensen includes Southern classics like hush puppies and fried pickles, shrimp, and chicken on his menu to complement the Cajun flavors and give guests a well-rounded New Orleans culinary experience.

Despite the widespread belief among foodies that Cajun food should never be eaten outside New Orleans, don’t be afraid to give it a try. Sorensen says that one of his favorite parts of the job is seeing someone new fall in love with the flavor of New Orleans from 1700 miles away.

“That’s why I keep an open kitchen,” he says, “so that I can talk to people all the time.” The spirit of Cajun food lies within an ever–changing culture that began with emigration and which continues to delight food lovers all over the world.