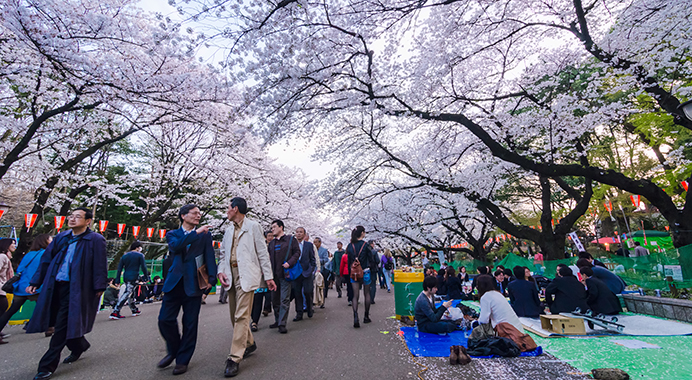 After a day of work in Osaka, Japan, Laurel Armstrong of Minneapolis, Minnesota, got on her bike to head home, winding through the city’s busy streets toward her high-rise apartment complex. She had been living in this Japanese metropolis for almost a quarter of her one-year work contract and had grown accustomed to the gray, austere metal of the city’s skyline and its almost incessantly overcast weather.

As Armstrong rode past a wide alleyway, her thoughts of dinner that night were suddenly interrupted; her eyes caught sight of something white and brilliant moving softly, stark against the alley’s monotonous slate walls. She stopped her bike and walked through the alleyway and soon found herself surrounded by a gentle, steady shower of cherry blossoms. A man standing nearby, also pausing to admire the soft stream of flowers, turned to Armstrong with a smile and explained, “It is the season of sakura.”

The reverence that locals and travelers feel toward Japan’s exquisite natural beauty—especially toward the Japanese Cherry, its most symbolic and well-known flowering tree—is what makes the springtime in this country so special. “If you’re going to go to Japan,” says Greg Wilkinson, a former professor of East Asian Studies at the University of Arizona, “go at the end of March because that’s when the sakura are in full bloom.”

In northern Japan, the blooms may come later—in April or May—but hanami, which literally means “to look at flowers,” usually occurs at the end of March and is a Japanese Shinto festival that celebrates nature, family, friends, and beauty. Anticipated nationwide in Japan, hanami commences when the sakura, or cherry blossoms, begin to appear. In fact, the Japanese watch weather forecasts almost religiously leading up to hanami in order to plan their celebrations. Newspaper and TV weather reports often predict if hanami will come earlier or later than in other years, and even Japan’s most stringent workers are known to take afternoons or long weekends off to celebrate the holiday.

In the last three years, however, hanami has taken on new meaning and ignited controversy throughout the country. After Japan’s devastating earthquake and subsequent tsunami and nuclear plant disasters on March 11, 2011, the nation went into a state of mourning. The feelings associated with 3/11 in Japan are comparable to those of 9/11 in the United States.

Just as the United States held off on events like professional sporting games and comedy shows immediately following 9/11, many Japanese have felt that the somewhat rambunctious and celebratory nature of hanami does not appropriately commemorate the loss and devastation of 3/11. Most Shinto shrines and other groups still sponsor the event, though some have tried to tone down the festivities to show respect for the country’s loss during that period.

Kiyiko Saito Sparks, a Japanese native who lived in Tokyo until she was 25, has fond memories of celebrating hanami with her family. “We would pack up our favorite foods and other goodies and take the train out of the city to somewhere we could enjoy nature,” she says.

Most hanami festivals are sponsored by parks or local Shinto shrines that lay out blue tarps underneath their sakura trees and allow vendors to sell food, clothing, and, of course, sake (rice liquor). Many families also take home fallen blossoms or branches from the sakura trees as souvenirs.

While Japanese parks and Shinto shrines lay out blue tarps under cherry trees for the public, some families enjoy hanami with quiet picnics in more secluded areas.

The significance of viewing the cherry blossoms in Japan dates back to references in the famous eleventh-century novel The Tale of Genji and has been an integral part of the nature-centric culture since. In Japan, transience is the purest and most desired form of beauty: Japanese literature is replete with stories of unrequited love; the allure is found in both love’s potentiality and its impossibility. Thus, the cherry blossom, which remains in bloom for only about two weeks, is what Wilkinson calls Japan’s “national aesthetic symbol.”

Hanami, then, is a celebration not only of the manifest beauty in Japan but also of the traditional Japanese perspective on beauty itself. The holiday is widely celebrated throughout the country, and most citizens consider it to be more of a cultural celebration than a religious one.

“Hanami is a much less organized or ritual-based festival than other Shinto matsuri [festivals],” says Wilkinson. “It’s a lot more inclusive.” For those looking to participate in a Japanese matsuri without knowing much about Shintoism, this may be the right festival to attend. Regardless of the reasons visitors attend the festival, the splendor of the cherry blossoms fosters an appreciation for the fleeting beauty that recurs each year only during hanami. Says Sparks, “It is a very Japanese celebration because the Japanese love and respect nature.”

For those not able to venture quite so far east, cherry blossom festivals are also held in regions throughout the United States.

Since the 1910s, Japan has donated more than 6,000 cherry blossom trees to the capital city, which hosts the National Cherry Blossom Festival annually.

Held in one of three remaining Japantowns in the United States, the Northern California Cherry Blossom Festival closes its celebrations with a grand Japanese-style parade.