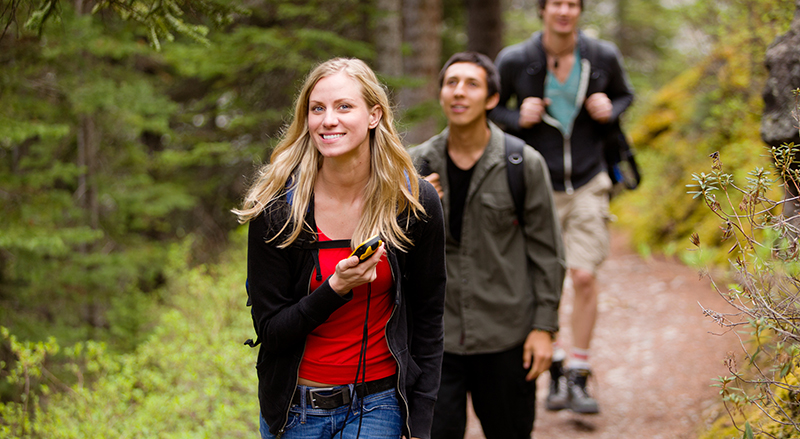 Jeff Lambert from Baltimore, Maryland, discovered the world of geocaching in 2001 when his wife gave him a GPS for his birthday. While mountain biking and fiddling with his new GPS in a state park, he came upon two people with GPS devices in their hands, scrambling around in the bushes as if searching for something. Curious, he approached them and learned that they were geocaching.

“When I got home,” he says, “I looked for the website and was intrigued by it.” Since he had always enjoyed utilizing maps, Lambert immediately joined the hunt—and he’s been geocaching for 12 years now.

The word geocaching combines two familiar treasure-hunting words: geo (meaning “earth”), used to describe the global nature of the game; and cache, used to describe a hiding place for supplies. Geocaching began in 2000, when the accuracy of GPS technology was significantly improved. At that time, thousands of GPS enthusiasts began experimenting on their upgraded devices.

For example, Dave Ulmer of Beavercreek, Oregon, wanted to test the accuracy of his GPS device, so he hid a navigational target in the woods. He even posted his idea to GPS user groups, calling it the “Great American GPS Stash Hunt.” To join in, all you had to do was hide a container in the woods and include the coordinates from your GPS unit so other people could find it. Fellow GPS enthusiasts could then locate the container but had to follow one rule: take something and leave something. As the game became more and more popular, fellow geocacher Jeremy Irish from Seattle, Washington, created geocaching.com, enabling people from all around the world to both hide and find caches.

Those who choose to hide geocaches simply have to find some kind of container, include a pen or pencil and paper in it, hide it, and post the GPS coordinates on the website so that geocachers can find it. Geocaches are made out of anything—literally. You can hide a rubber alligator geocache with only its stomach slit open to store the pencil and paper. Or if you’re feeling less creative, you can hide a standard geocache box that you can purchase online—a large army-green container with the words “Official Geocache” on its side. You can purchase a box with objects included, you can choose to put your own objects inside, or you can hide it with nothing but paper and a writing utensil.

Join the Hunt: These Days, It’s for Everyone

Lambert’s nephew Mark Brown of Provo, Utah, always found his uncle’s geocaching adventures interesting, but he didn’t plan on joining because GPS devices were so expensive—that is, until the advent of the smartphone. Because Brown’s iPhone had a GPS device neatly integrated into it, geocaching quickly became a hobby for him, and within two months, he had found over 100 geocaches. “When I finally started doing it, I thought it was the greatest thing ever,” he says.

If you own a smartphone, you won’t need a separate GPS device to start caching. Simply download an app and use the GPS device in your phone to locate millions of caches that are hidden in locations throughout the world. Geocaching has become the modern-day treasure hunt for anyone carrying a smartphone. It’s a fun activity for everyone—not just for pirates, gold miners, or topography fanatics.

What was once an intense hobby is now an activity for the average Joe or Jane. Geocaching is a popular hobby for college students because it is fun and inexpensive. You can even compete in group activities—the group to find the most geocaches in an hour wins.

Caching and Traveling―at the Same Time

A tap on your screen will direct you to the nearest cache in your area. Brown explains that finding caches “is easy because they are literally everywhere.” The best part about geocaching is that it can range from an hour-long activity with a date to a rigorous two-day trip with your friends. Geocaches come in different types and levels of difficulty depending on their location. You might have to hike for 10 miles to the middle of nowhere to find one geocache, but you might only have to get out of a car and walk a couple of yards for another—so choose whatever you’re up for.

It’s common for geocaching enthusiasts to combine traveling and geocaching. Lambert enjoys biking—he even has a portable bike that he has taken to China. “I tend to geocache when I bicycle, so the geocaches I find are close to trails,” he says. Brown also enjoys caching on vacation. While waiting for his fiancée to pick out a wedding dress in Alexandria, Virginia, he found a number of geocaches that treated him to history lessons about the city.

You may find a little downtime for catching up on your caching during your next trip as well. Whether you’re on a big road trip and need to stretch your legs or on a hike through a park, you can always take a few minutes to go caching.

Don’t know where to start? Head over to www. geocaching.com and create an account―it’s helpful to familiarize yourself with the site. Then you can download a free app―such as c:geo for Android phones or Geocaching Intro for iPhones―which locates all of the registered caches within a given radius of your location. If you really like geocaching and want more options, you can buy the full-version app called “Geocaching” for $9.99.

If that’s not enough, shop around on www. geocaching.com and find out about all the ways you can buy and use tools, geocaches, and objects called trackables. As you browse through geocaching.com or your new app, you’ll find there’s far more to geocaching than caches and GPS devices. This website has all the resources you need to become an expert geocacher.