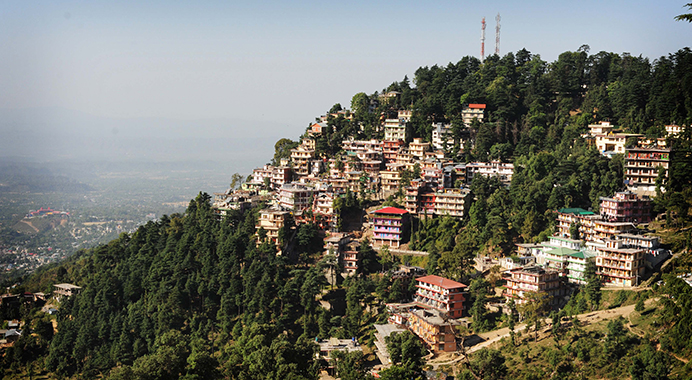 I hobbled out like a hungover sailor shaking out my sea legs. And there I was, in Dharamsala, India—a cluster of brightly colored restaurants and guesthouses all stacked up on top of each other like a patchwork quilt—something between a city and a village nestled on the green mountain ridges, a place in transit, a sanctuary for the homeless, the country-less. The street was packed with maroon-clad monks and dreadlocked, tattooed hippies, Tibetan seniors waving their canes at oncoming traffic as they tried to get to the Dalai Lama’s temple, and then the occasional dazed traveler.

On the surface, Dharamsala, India, looks like the perfect tourist destination for curious Westerners to discover their spirituality. The forested foothills of the Himalayas in northern India seem like a likely place for this sort of exploration. A destination for religious tourists seeking enlightenment or a pit stop for backpackers interested in a hot meal and cheap hostel—Dharamsala shelters a confusing conglomeration of people with very different backgrounds, worldviews, and reasons for being in this city of outcasts.

However, behind all the tourist shops, the city is steeped in the spirit of sacrifice and faith. The real story behind this place is found in the amazingly dedicated Tibetan Buddhists who risked everything to escape political turmoil, to build a magnificent temple, and to be with their spiritual leader, the Dalai Lama. These refugees have given up their homes and possessions to start over again in Dharamsala—a reincarnation of traditional Tibet.

Dharamsala is a Hindi word meaning “holy dwelling,” which refers to the shelters adjacent to their temples that house visiting pilgrims. Fittingly, this Indian city has sheltered thousands of Tibetan refugees since 1959, when the Dalai Lama led his followers out of their home country to escape intense religious and cultural persecution. The area is still a refuge for Tibetans escaping hardships in their home country and is the heart of Tibetan Buddhism.

While volunteering as an English teacher, Rachel Reuckert spent three months in Dharamsala, learning many of these people’s stories. The family who housed her included one of the first refugees who crossed into Nepal through the Himalayas in the dead of winter—on foot. Reuckert knew her only as Grandma.

Although today Grandma waves her cane at traffic on her way to the temple, 50 years ago she was thinking of the family members and neighbors whom she lost in the revolution or who starved to death. After nearly six thousand monasteries and temples were burned, many monks were jailed, and their culture was systematically eliminated, Grandma and hundreds of others like her were unable to endure any more persecution. So they decided to escape to sympathetic India. Arriving with nothing but tents and their cultural heritage, these displaced Tibetans began building Dharamsala into a home.

Even today, sacrifice and devotion infuse the city with cultural and spiritual vitality as newcomers arrive from Tibet. For example, Norbu is a 26-year-old monk with a missing front tooth, a quick wit, and a habit for laughing at moments his elders considered inappropriate. He fled Tibet when he was 19, without even telling his parents beforehand. During her stay in India, Reuckert learned Norbu’s story.

Monks hike around the temple as part of a ritual called Kora to improve their karma.

“You didn’t tell your family?” Reuckert asked him.

“No!” he giggled, slapping his robe-covered knees. “But they are happy I did not tell them. They would worry too much, and I am safe and happier here.”

In this city of faith and sacrifice, the reincarnated Tibetan spirit inhabits Dharamsala, as shown through Norbu and other religious refugees. This spirit of faith resides in the faithful—from the aged to the young—who visit the temple each evening. This spirit resides in a 90-year-old woman, who resolutely performs her physically demanding prostrations every day. As the air cools, these refugees walk the path that circles the temple, worshipping and improving their karma.

While gathering stories, Reuckert hoped to experience Dharamsala authentically. Like the Dalai Lama, she believes that different religions and cultures can learn from each other and better understand their own spiritual practices through their interaction. However, she also learned the dangers of romanticizing this spiritual experience, glossing over Buddhism’s intricacies, and inventing a convenient westernized version of this complex culture.

Visitors are more likely to enjoy an authentic experience in Dharamsala if they recognize that the traditions and beliefs of other cultures are not easily understood—and if they arrive in Dharamsala without expectations and with an attitude of welcoming surprises.

When visitors take the time to appreciate cultural diversity and to communicate with the locals—by becoming involved in such activities as volunteering to teach English, asking polite questions, or even becoming a shop owner’s favorite customer—visitors will learn that everyone here has a story worth hearing. When visitors participate in religious services respectfully and intelligently, they may even feel their karma increasing as they walk around the Dalai Lama’s temple in this holy dwelling place.