Buen Camino: A Pilgrimage in Spain 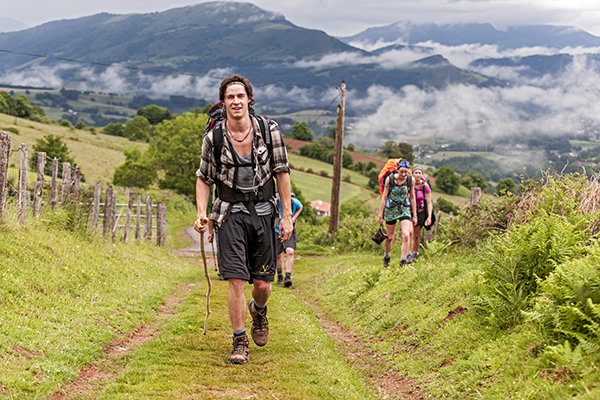 For more than a thousand years, the city of Santiago de Compostela, Spain, has welcomed weary pilgrims with open arms. Each year, Spaniards and other travelers from around the world trek hundreds of miles through the rolling hills, wooded forests, and pastoral fields of the Camino de Santiago, and the warmhearted people of Spain wish them buen camino or “good walk.” You too can make the pilgrimage and take in the stunning scenery, the rejuvenating camaraderie of other travelers, and the unexpected exhilaration of a life-changing walk.

Many travelers are drawn to the cathartic, green countryside of northern Spain on the Camino de Santiago.

Adventurers have flocked to this path since AD 814 when, according to legend, a shower of falling stars led a Spanish hermit to the hidden tomb of the apostle Saint James (Santiago) on a path now called the Camino de Santiago. Many Christians still believe that Santiago de Compostela is the site of Saint James’s burial. But you don’t have to be a traditional pilgrim to embark on this journey. All you need is a pair of walking shoes and a hunger to see life in a new way.

“It’s such an authentic way to see a place. It’s beyond seeing Spain,” says 24-year-old Brittany Koteles of Belvidere, Illinois, who completed the Camino in 2010 while studying in Spain. “You’re retracing the steps of a journey that thousands of people have made, and you’re sharing it with strangers,” Koteles explains. “You’re crossing a country on foot, seeing the beauty it has and meeting the people who live there. You can’t have a much more authentic tourist experience than that.”

Travelers on the Camino de Santiago find rewards in their personal journey, not just in their destination. In Spanish, the noun camino means “the way” or “the journey,” but as a verb, camino means “I walk.” The Camino de Santiago isn’t just another European vacation—it’s a chance for you to walk purposefully along a gratifying road of introspection. “Sometimes I think we turn tourism into a to-do list,” says Koteles. “This trip is one of the best ways to counter that. It’s a way to let travel facilitate your learning about other places, other people, and also yourself.”

The trek isn’t easy, but it can be personalized to fit anyone. (Photo by Ron Albers)

Make Your Own Adventure

Everything about this modern pilgrimage can be personalized, including the extent to which you plan ahead, the pathway you take, and your choice of food and accommodations.

Don’t be afraid to set out without a distinct plan. Read online forums like www.caminodesantiago.me to find out what other travelers have done. If you’re in Spain or southern France, “take your passport or some sort of ID and go to nearly any city’s culture department or town hall, and they’ll tell you where to go,” says Koteles.

If you’re already in Europe, the Camino is a journey you can be impulsive about because it’s not going to break the bank. Most of the paths wind through the verdant, hilly scenery of Galicia in northern Spain, where you can traverse amazing countryside on US$15–20 a day. Pilgrims often carry only the bare necessities on their backs and spend their days strolling through picturesque medieval villages and culturally rich cities as passersby wish them a “buen camino.” Most travelers appear on the path during their summer vacations, but if you want to experience better weather and smaller crowds, go in May.

“They call it the España verde, the green Spain, because there are forests and beautiful cliffs and mountains,” says Koteles. “There’s so much more to Spain than flamenco and the Mediterranean backdrop. This trip is more than an immersion into Spanish culture; it’s an immersion into Camino culture. You’re in an environment that allows you to learn from the stories of the people. You bond quickly because you’re achieving this crazy, amazing task—together.”

Saint-Jean-Pied-de-Port, France, is the traditional starting point for most of the Camino paths. The first day begins with a difficult hike, but it provides views like this as a reward.

Whether you are traveling for spirituality, for exercise, or for scenic retreat, “there’s no grand beginning,” recalls Koteles. “We took a night bus to Lugo about 120 kilometers [75 miles] outside of Santiago. We got off the bus at 7:00 AM and started walking—and we didn’t stop for five days. You think you’re going to get lost and that you won’t be able to find the path, but we just asked somebody where the Camino was and they showed us to the first sign.” Koteles explains that symbols of a scallop shell, the sign of Saint James, officially mark the direction of the path. In the wilderness, you will find your way by following the footprints of other pilgrims—along with arrows that are spray-painted yellow.

There are nearly 30 recognized trails on the network of paths referred to as the Camino de Santiago. Whether you’re starting in Spain, France, Portugal, or even Germany, there is a path that will get you to Santiago de Compostela. One of the best ways to choose between them is to first determine how long you have to travel and from which city or country you will start. From there, you can visit a website such as www.csj.org.uk to learn more about each particular path.

The most popular paths to Santiago de Compostela follow the trails of the earliest long-distance pilgrims who came from beyond the Pyrénées in France and traveled west across northern Spain. The three most customary of these are the Camino Primitivo, which includes stops at remote monasteries; the Camino del Norte, which follows the stunning coastline cliffs of northern Spain; and the Camino Francés, or French Way, which is the most traditional path.

The average distance for the full walk on the French Way is about 780 km (485 miles), but the length depends on which of the many trails you choose. If you feel deterred by this distance, pick a starting point that is farther along. Remember, this is your Camino; so make what you want of it.

Eventually, after many days—or weeks, depending on where you begin your journey—your path will meet up with the majority of the walkers about 97 km (60 miles) outside the city of Santiago de Compostela. Here, the buzz of excited travelers will accompany you as you cross the final hamlets to reach your long-awaited destination.

You can have your credencial (pilgrim’s passport) stamped for evidence of your walk.

Hearty Spanish meals are inexpensive, and the majority of young pilgrims opt to stay in albergues, which are inexpensive hostels, lodges, or community centers reserved for travelers on the Camino. Expect to pay between five to ten euros (about US$6.75–$13.50) to sleep in simple bunk beds.

Wherever you begin your journey, be sure to pick up a credencial—also called the pilgrim’s passport—so you can acquire stamps and gain access to inexpensive lodging. Nearly any bar, restaurant, or albergue will have its own hand-carved wooden stamp. In addition to being souvenirs, stamps in your pilgrim’s passport also provide proof that you walked the last 100 km (62 miles) on foot, which is the feat required to earn your certificate of completion.

Join A Fellowship of Pilgrims

When Koteles and her friends set out on their own spontaneous pilgrimage, they never imagined the friendships they would create. “When you get to town each night, you have people waiting for you, cheering you on,” she says.

On their journey there was a group of five elderly men from Madrid; everyone referred to them as los abuelos (the grandpas). Led by a charismatic 89-year-old man, they were one of the first groups to complete their walk each day.

When Koteles and her group finally arrived at the end of their journey, the city of Santiago was crowded with tourists. “We somehow found the abuelos in the center of town in a plaza,” she remembers. “A band was playing, and it started raining, and we were just dancing with the abuelos in the rain, celebrating.”

This is one of her most prized memories from the trip. “You form incredible bonds with people because there’s no pressure from the real world. You skip 10 steps of the getting-to-know-you process because everyone’s there with a purpose.”

Similarly, along the path friendly faces wait to welcome you to the part of Spain that they call home. A few days into the journey, Koteles and her friends walked by a woman in her garden who greeted them and invited them in for tea. “Her name was María Pilar, and she explained that years ago she had a corporate position at a job she didn’t like,” Koteles recalls. “And then she did the Camino, and it changed her life—so she left her job and bought a cottage on a secluded portion of the Camino.” María Pilar now leads a simple life making jewelry, and she opens her home to pilgrims whenever she can.

The scallop shell, the symbol of Saint James, marks the many paths of the Camino. (Photo by Ron Albers)

Get away from the office or the demands of school, and let life slow to the pace of your walk. On the Camino, time is your only luxury—experiences are your only priority. If you’re looking for a chance to reflect, reevaluate, and remember what is truly important in your life, there is no greater setting than the paths through the rolling green hills of Spain.

You may begin your journey with strangers, but you will arrive in Santiago with friends for a lifetime. Take paths that are out of the way. Meet new people. Try new foods. Learn new words. The cathartic power of nature and the rejuvenating power of fellowship will be your greatest allies on this strenuous but beautifully rewarding journey.