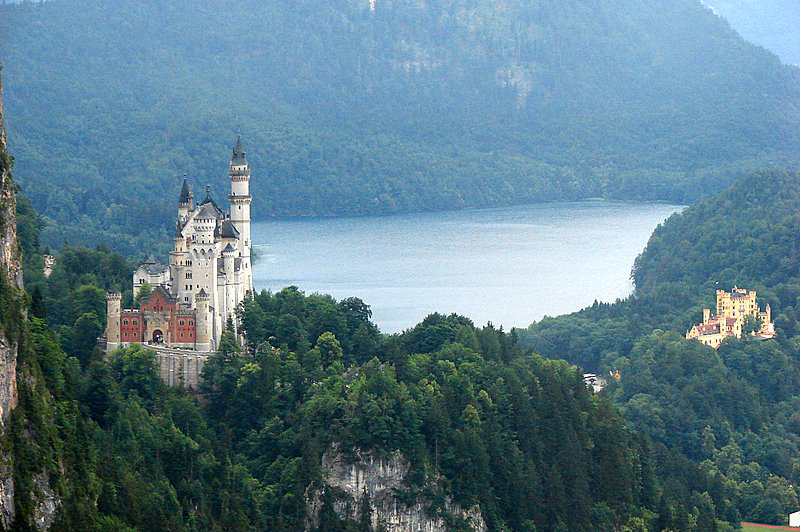 Thinking about the Germany of days past conjures up images of a lederhosen-wearing, beer-slinging, sausage-consuming folk. In Bavaria, the most southern of the German states, such scenes still pepper the countryside. Bavaria is also one of the most beautiful German states with its forests, rolling hills, and the Alps mountain range gracing its southernmost border. Capitalizing on Bavaria’s beauty, enterprising travel agents in post-war Germany created the Romantischestraße out of an old medieval trade route. Known in English as the Romantic Road, this highway stretches 221 miles through Bavaria and leads from Würzburg in the north to Füssen in the deep south.

The most authentically German way to explore the Romantic Road is by bike. The official Romantic Road travel agency, supported by the Federal Ministry of Economics and Technology, offers free GPS downloads of the bicycling route. And there are several services that will cart your luggage from city to city so you don’t have to worry about anything except the bike and the scenery. Along the way, the road provides access to some of the oldest towns in Germany with rich cultural heritages to explore.

Start your journey in the scenic baroque town of Würzburg. Despite heavy bombing during World War II, this city still offers one of the most splendid examples of baroque architecture in Germany: the Würzburg Residenz. This stately structure once housed Franconian prince-bishops and is now a tourist attraction boasting detailed stucco art and painted ceilings. Würzburg also hosts the first spring fair in Bavaria, held three weeks before Easter every year. Walk around the baroque- and English-style gardens for free. You can also enjoy carnival rides, games, food, and traditional dancing.

The small town of Rothenburg ob der Tauber is one of only three remaining walled cities in Germany. Biking in this part of the country is relaxing because the route is flat and the bike paths are well marked along low-traffic country roads. Once you reach Rothenburg, you’ll be awed by its examples of perfectly preserved medieval architecture, city planning, and lifestyles. For two euros, you can climb to the top of the town hall tower, built in AD 1250, and experience an all-encompassing view of the city.41 miles (66 km) south of Würzburg

Biking farther south, you’ll reach another famous walled German town, Nördlingen. This town is much smaller than Rothenburg and is decidedly less crowded. Interestingly, the town lies in a bowl caused by a meteorite impact, making the town feel more secluded. Walk along the city walls for beautiful views of the city and the surrounding countryside.

The farther south you travel along the Romantic Road, the hillier the path becomes. But don’t worry—it’s worth it. Nestled in the foothills of the Alps, Neuschwanstein (opposite page) is a nineteenth-century castle that towers over the town of Füssen. Reaching this magnificent castle requires a short hike up a paved path. Walk to a footbridge off to the side and you can see Neuschwanstein in its entirety snuggled up against the Alps and the picturesque valley below. The castle is a perfect end to your biking trip through Germany’s most pristine country.