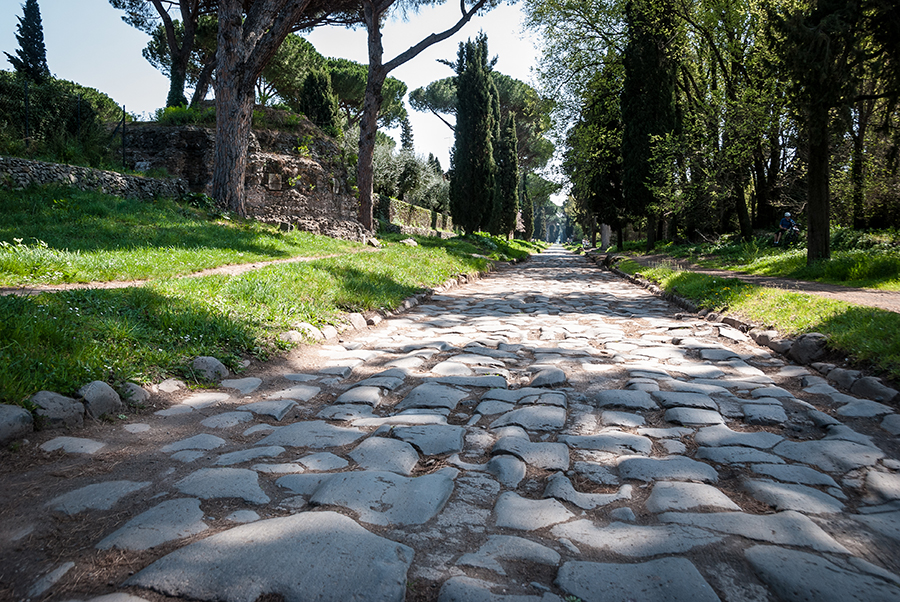 Julius Caesar, the Apostle Paul, Herman Melville, and Mark Twain—what do all these men have in common? They all traveled on and were inspired by one of the earliest and most-traveled roads in history: the Appian Way.

Built in 312 BC, the Appian Way strategically connects Rome with important port cities situated in the heel of the Italian peninsula. The first-century Roman poet Statius called this route the “queen” of all long-distance roads. Its cobblestones wind through the towering umbrella pines of Rome, climb the rocky slopes of the Apennine Mountains, roll with the hills of the Italian countryside, and come to an end at the foot of a tall stone column in Brindisi, Italy, where the salty water of the Adriatic Sea laps at the shores nearby.

Although the Appian Way is no longer navigable by car (or chariot), the road is still there, and visitors can retrace its history on foot.

Come with us as we trace the route by train and by bus, making stops at some of the most unique and inviting cities along the Appian Way. In Rome, go to Termini train station, catch a train to Bari, and let the journey begin.

Bari (BAH-ree) is the biggest of the cities that you will see on this trip. The beauty of Bari is that “it’s virtually free of tourists,” says Hillary Nasari of Las Vegas, Nevada. As Nasari lived and studied in Italy for two years, she discovered that “the best things in Bari are FOOD!” Prepare your palate for Bari’s well-known gelato, focaccia (flat, oven-baked bread), and panzarotti (small calzones made with soft dough and filled with tomatoes and mozzarella). Take time to visit the shopping district Via Sparano to check out the latest in European fashion. Finish off the day by strolling down lungomare (the boardwalk) as you watch the sun set over the bright blue Adriatic Sea.

The roof of each of the trulli in Alberobello features a unique design.

Alberobello (al-ber-oh-BELL-oh) is a city straight out of a fairytale. Kristina Fidler of Wasilla, Alaska, who lived in Italy for a year, recalls her impressions of Alberobello: “It’s just a little bit of magic in a small town tucked into the hills of southern Italy.”

It is most famous for its many Puglian trulli (TRUE-lee), small round dwellings with conical-shaped roofs. Trulli dot the Puglian countryside, but only in Alberobello can you find a city entirely made of trulli. Wander through its quaint streets, explore the many shops run by local artisans, and enjoy a unique piece of Italian culture.

Next, stop in Ostuni (oh-STEW-nee). Located just outside of Brindisi, Ostuni is the southernmost city on the Appian Way. Built out of a series of levels, staircases, alleys, and arches, Ostuni gets its nickname, “The White City,” from the dazzling appearance of its ancient white walls that still surround its whitewashed buildings and houses.

Not only does Ostuni boast compelling history and stunning architecture, but it is also located just eight kilometers from the pristine beaches of the Mediterranean coastline. Ostuni itself is an ancient fortress built on top of a hill and is a true masterpiece of Mediterranean architecture.

Pasta con le cozze, anyone? The unique location of Taranto (TAH-rahn-toe) creates the ideal conditions for cultivating cozze (mussels) and gives the city its nickname, “The City of the Two Seas.” Taranto is situated at the inlet of a bay and consists of natural peninsulas and a man-made island. The island was formed when a channel was made to facilitate ship passage into the bay.

While in Taranto, make sure you visit Aragon Castle (a fifteenth-century defense that overlooks the sea), admire the Ponte Girevole (the only bridge in Italy that pivots rather than rises), and tickle your palate with some of Taranto’s tantalizing seafood dishes.

Your last stop is definitely one of the highlights along the Appian Way. Matera (mah-TEH-rah) is an ancient city carved out of the stone slopes of a small canyon. If you ask anyone in the South where you should go, they will tell you to visit the Sassi di Matera (the stones of Matera). Matias Pedreira of Montevideo, Uruguay, who lived in Italy for two years, says, “As soon as you get to Matera, you feel as if you’ve stepped back in time about 2000 years.”

Pedreira is not the only one who thinks so: Mel Gibson picked Matera for the location of the film The Passion of the Christ (2004). In fact, the city does date back to as early as 300 BC. Some of its original, cave-like dwellings can still be seen on the outskirts of the city.

Explore the twisting cobblestone streets. Venture into the churches and little shops carved into the rock.Take lots of pictures, and don’t leave Matera without sampling its mouthwatering pastries.