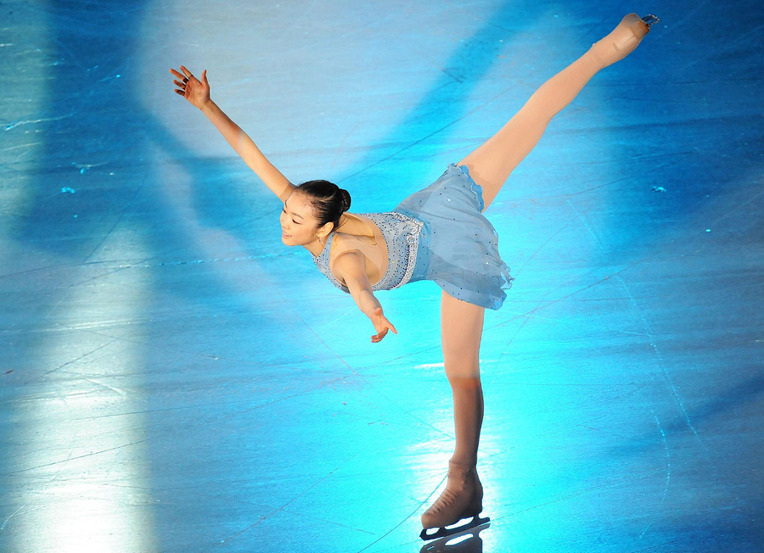 On February 7, the chilled air in Sochi, Russia, will crackle with excitement as thousands of people cram into the Fisht Olympic Stadium, cameras glinting like a school of fish in an ocean of bodies. Tweets and texts in a myriad of languages will fly to destinations across the globe to share the memory of the moment. And with music and dancing, art and narration, the 2014 Winter Olympic Games will begin.

Whether you’re in the stadium or watching from home, the opening ceremonies will open your mind to the Sochi way of

Athletes from all across the world will compete in myriad events such as downhill skiing.

seeing the world. In fact, the actual athletic events are just a small part of the complete Sochi experience.

For the past four years, performers from 53 provinces in Russia and from 20 additional countries have traveled throughout Russia competing in an event known as the Cultural Olympiad for a chance to perform during the Winter Games.

“The Sochi 2014 Cultural Olympiad is a unique project by the organizers of the Games, offering the best cultural events in the country,” the official website reports. “In 2014, visitors to the Olympic host city will not only be able to evaluate the sporting competitions, but also [experience] Russia’s cultural diversity at dozens of performance venues located in Sochi and Krasnaya Polyana.”

There will be presentations for everyone; events range from cinematic viewings to acrobatic performances, and from museum exhibits to music and dance.

The sharing of cultures has always been part of the Olympic Games. Most Olympic committees have incorporated culture into their city’s Games through performances surrounding the running of the torch, during the opening and closing ceremonies, or as part of the presentation of medals.

Ed Austin, director of Brigham Young University’s International Folk Dance Ensemble, has taken his group to perform in conjunction with two Olympics: the 1988 Summer Games in Seoul, Korea, and the 2002 Winter Games in Salt Lake City. For him, cultural sharing is what the Olympics are all about. “The Olympic Games promote uniting countries that, over the years, have had a hard time being united,” Austin says. “It pushes peace. That’s what the spirit of the Olympics has always been: to bring us together.”

And that can happen whether you’re in Sochi, at home, or gathered with friends or strangers anywhere across the globe.

If you are headed to Sochi for the 2014 Winter Games, here are a few things you won’t want to miss.

Blini, or a thin, pancake-like griddle cake, is common Russian cuisine, pictured here as a savory meal with sour cream and caviar.

To get a taste of any culture, you need to try the food. Before you leave Sochi, be sure your plate has been filled with an

“Russian food is great,” says Olga Ookhara, a native of eastern Russia. “The only thing is that we have bizarre types of food. In Russia, people eat liver or a cow tongue or raw pig fat-—those kinds of things.”

Russia is also known for its soups. Be sure to try borscht, a beet-based soup, and solyanka, a spicy, thick tomato chowder. And don’t leave the country without some blini—a thin, crepe-like griddle cake that can be filled with anything from caviar to sweet jam.

“I believe when you look at a culture’s art, when you look at their music, their dance, their theater presentations, it reflects the well from where the water comes,” Austin says. “It reflects their history and where they lived because of things like dress and materials—those are part of their traditions. You’re not just looking at a series of steps danced to music; you’re looking at something that goes much deeper.”

Take a dive into that well with the best the Cultural Olympiad has to offer. Performances will be going on around Sochi and other areas in Russia throughout the games.

Russia has a rich history of tsars, dictators, and federalist leadership—a history that is reflected in the architecture of the city of Sochi. Most notable is the Sochi Railway Station; its majestic white arches running the length of the building and the stately clock tower that stands by the building’s side will transport you back to the Stalin era in Russia’s history.

But Sochi is about more than just its rulers. Sochi is also known for friendship. A living representation of that worldwide friendship can be found at the Friendship Tree Garden Museum. There, visitors will find a tree grown from over 170 buds planted by notable guests from across the globe, a true embodiment of transcending differences to create beauty.

An appreciation of cultural diversity is reflected in the Sochi 2014 medals: the Sochi mountains depicted on the medals are textured by an array of symbols from nations and ethnicities across Russia.

Even if you aren’t in Sochi, these Winter Games can still jumpstart your cultural awareness. Try visiting a restaurant with authentic food from the country whose athletes medaled in your favorite event. Even if you decide you don’t like the food, you will have a fuller view of the country and its traditions, associated with smells and tastes unique to your experience. If you want to sample multiple cultures, find an art or dance festival being held near you. Folk dance festivals held across the globe can teach unique lessons about a country’s culture.

Wherever you end up enjoying the Olympics this winter, find a way to round out your athletic experience with some culture. “I think part of the goal of having an Olympics is really letting us get to know one another,” Austin observes. “We dance in other people’s shoes when we watch them on stage.”

Whether it is food or music, dance or museums, or even tuning in to the opening ceremonies, your Olympic experience won’t be complete without a dash of culture. Amidst your wild cheers for fellow countrymen and your tears of pride as you listen to your anthem laud your nation’s athletic achievement, take a moment to look at the stranger standing next to you; take a moment to dance in his shoes.

When the Olympic Committee announced its decision to let Sochi host the 2014 Winter Games, the world rejoiced,

excited to let Russia host its first games as a country. But Russians just scratched their heads. Sochi? While anywhere in Russia might evoke images of snow and ice and cold for most of the world, natives have always considered Sochi to be a warm resort town complete with palm trees and beaches.

Located in southern Russia on the shores of the Black Sea, Sochi has a conflicted political history. Because of its beautiful climate and advantageous location as a shipping port, empire after empire took control of the region during the Middle Ages only to lose it again to the next invaders. Eventually, Sochi became part of what is now Russia, and the town was given its current name.

Sochi is not located near any of Russia’s large, internationally recognized cities like Moscow or St. Petersburg. Instead, it lies south of Ukraine in the more temperate climates of the region. However, as host city to the XXII Olympic Winter Games, Sochi may see the economic growth needed to add its name to the list of notable and known Russian cities.