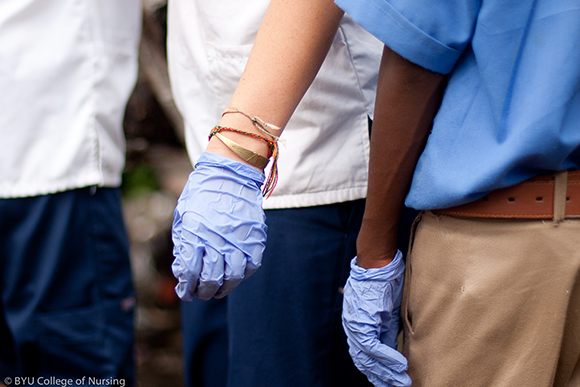 Ghana. Ecuador. India. These are three of ten sites across five continents where university students from the United States are traveling to administer vaccines, conduct anemia research, and assist people who are afflicted with leprosy. In the process, they are becoming better nurses.

Every year, groups of senior nursing students from Brigham Young University (BYU) take time away from the classroom and step outside their comfort zones to participate in intensive global health courses. Follow three of these students around the world and learn how global travel has transformed each one into a more compassionate nurse.

“There’s a very different healthcare system in Ghana than in the United States,” says nursing student Sarah Leggett of Wilmington, North Carolina. Students in Ghana see two very different systems within one country. They spend half their time in the capital city of Accra, where healthcare is somewhat available, and the other half in the small village of Abomosu, where there is very limited accessibility.
Because of this limitation, local nurses in rural villages play a huge role in their communities. They truly watch over the whole village. When it comes time for yearly vaccinations, community nurses will literally stop children on the street to make sure they are taken care of. Their responsibility also extends to spiritual care.

“One morning, as we were waiting for the doctor’s office to open, the local nurses began to lead everyone in song and prayer,” says Leggett. “I honestly was a little uncomfortable with it at first.”

In the United States, Leggett isn’t used to sharing her spirituality openly with patients. “It’s easy to worry that someone will be offended,” she explains. “I realized in Ghana, though, that it’s important to pay attention to my patients’ spiritual needs. I can find ways to provide religious support that’s appropriate to the individual.”

While Leggett learned in Ghana how to share more with others, a nurse in Ecuador learned to value what others have to share. In Ecuador, student nurses have the chance to participate in an ongoing anemia study. Guided by their professors, students collaborate with local nonprofit and government programs to find successful, long-term solutions to children’s anemia. Charity Rowley of Allen, Texas, assists in this research by gathering data and compiling statistics in Guayaquil.

Students also travel to several impoverished rural areas outside of Guayaquil, where they teach workshops to community health professionals. The situation here is similar to the situation in Ghana. “Often in these rural communities, there are no doctors, so the community nurses are relied on to do just about everything, including delivering babies,” Rowley says.

Because of this enormous responsibility, Rowley and other nurses held a birthing scenario workshop, where they could collaborate with the local health professionals and offer new ideas. The students also taught teachers how to prepare for emergencies, providing them with peace of mind in case of an accident or a disaster at school. But what really stuck with Rowley—even more than the skills or procedures—was the people.
“I was really impressed with their willingness to learn; they were so humble and open to any information we had to offer,” Rowley explains. “I realized it’s important that I’m also willing to learn and accept what other people have to teach me.”

While Rowley had opportunities in Ecuador to teach and to research, students in India went back to the basics, giving wound care to patients in leprosy colonies. Cheryl Corbett, an associate professor at BYU, who annually leads a group to Tamil Nadu, India, explains that leprosy is still a very real and divisive problem in India.

“Most people don’t realize that leprosy is a treatable disease,” Corbett says. “In the United States, leprosy is known as Hansen’s disease; there’s no stigma in getting treated.”

But in southeastern India, the stigma is very much alive. “Leprosy is seen not only as an illness, but as a curse,” Corbett says. Out of fear, many individuals postpone treatment, leading to permanent nerve damage and even the loss of their extremities. Eventually, they are cast out of their communities and into leprosy colonies.

Nursing student Katie Holiday of Poway, California, says she was somewhat uncomfortable at first with the painful chronic wounds she saw in the colonies. Eventually, though, she learned to look beyond the disease and see the person instead.

“One day, while we were doing wound care, a lady sat down at my station and was smiling from ear to ear,” says Holiday. “I told her my name and she started laughing.” In Hindi, the word Katie means naughty, or bad. “No one would believe me that my name was Katie,” explains Holiday. She found that although they couldn’t speak a word of each other’s language, they could still connect.

“After I told her my name, we laughed and laughed and laughed,” Holiday says. “We sat there for probably 10 minutes laughing. I couldn’t believe how happy she was in spite of her condition. I realized that I wasn’t just treating a wound, but I was helping a person cope with her illness.”

Working in various areas across the globe, these three nurses learned lessons that can’t always be taught in a classroom: to love, to learn, and to laugh. Their willingness to travel and work around the world enabled each of them to gain new, global perspectives that have transformed them into more compassionate nurses who can better serve their patients at home as well.