Redefining the Festival of Colors 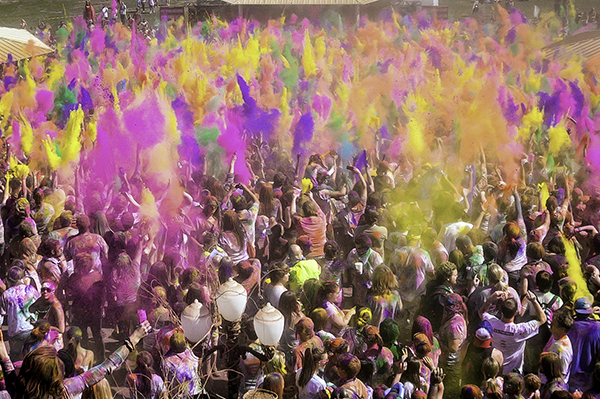 Participants throw colored powder into the air during one of the throwings at the Festival of Colors in Spanish Fork, Utah.

Crowd surfers are hoisted up by friends and strangers.

1! I join tens of thousands of people in throwing colored powder into the air. The sky is painted with bright pink, purple, orange, and yellow clouds. The clouds blend together and rain down on the participants below. Welcome to the Festival of Colors.

Participating in the Festival

Every year in the early spring, the Sri Sri Radha Krishna Temple in Spanish Fork, Utah (approximately 50 miles south of Salt Lake City), hosts one of the largest Festival of Colors events in the Western Hemisphere. On each of the two days of the festival, scheduled “throwings” of colored powder occur throughout the day. These throwings are preceded by countdowns led by an announcer over a microphone.

Throughout the festival, musicians play traditional music that features the names of God, and they lead the crowd in mantras. Participants mingle in the crowd in front of a stage where people dance, crowd surf, form conga lines, and generally have fun.

A conga line weaves through the crowd in between throwings.

Those who aren’t interested in the crowd can eat authentic Indian food, visit the temple’s llamas, shop among a variety of vendors, or explore the outside of the temple. The temple’s interior is closed during the Festival of Colors to preserve its cleanliness.

Between scheduled throwings, it is entirely commonplace for participants to throw, smear, or sprinkle the colored powder on each other.

This colorful festival in Spanish Fork is based on the Hindu religious holiday Holi (pronounced the same as holy). The celebration of Holi began in northern India but has since spread to southern India, other South Asian countries, and even the rest of the world. Because Holi is celebrated as a two-day event in Spanish Fork, the experience is very different from what one would experience in India, where Holi is celebrated as a holiday that can span several days.

Dr. Charles Nuckolls, a professor of anthropology at Brigham Young University, explains one of the biggest differences: “In India, Holi is not a crowd process. There can be crowds, but that’s not really how it works. You don’t stand in place and wait for the powder to descend upon you. You could be walking anywhere and somebody pops out and throws color on you.”

In Kharadi, India, people take to the streets on Holi to celebrate Hindu tradition.

In India, the Holi Festival is celebrated in conjunction with the full moon of Phalguna, which usually falls during February and March of the Gregorian calendar. Caru Das Adikari, the priest of the Spanish Fork Krishna Temple, always schedules the Spanish Fork event on a Saturday and Sunday as late as possible during spring to increase the probability of warm, dry weather. In 2014, the event takes place on March 29 and 30.

The best-known component of the Holi Festival is the throwing of colored powder or water. According to Hindu mythology, Lord Krishna (one of the ten incarnations of Vishnu, the supreme god of Hinduism) was jealous of Radha’s fair complexion, so he smeared color on Radha’s face. Thus, it was Krishna’s playful prank that started the tradition of throwing color during Holi.

The throwing of color is the main event at the Spanish Fork celebration. Although throwing dyed water is popular in India, Caru Das felt that it would be best to ban all liquids due to Utah’s much chillier climate during early spring. Even though the Color Festival is now structured around scheduled throwings, the element of spontaneous ambushes of color is still present.

In Kharadi, India, people take to the streets on Holi to celebrate Hindu tradition.

In India, a bonfire is traditionally lit on the eve of Holi, known as Holika Dahan, to reenact the myth of Holika and Prahlad. According to Hindu mythology, a demon king named Hiranya Kashipu declared himself ruler of the universe. However, his son Prahlad refused to worship him and worshiped Vishnu instead. Hiranya Kashipu asked his sister Holika to carry Prahlad into a fire, knowing that Holika had a boon from the god Brahma that allowed her to be unharmed by fire. However, Prahlad’s devotion to Vishnu allowed him to escape unharmed while Holika burned to death for attempting to use her boon to do harm. Thus, the bonfire represents the victory of good over evil.

A bonfire with an effigy of Holika is lit once or twice each year at the celebration in Spanish Fork, but it is easy to miss. Caru Das explains that the bonfire’s low profile is partially due to worries about the safety of Holi participants and partially due to concerns from local fire departments.

A Holika effigy burns during the Festival of Colors in Spanish Fork.

Historically, Holi was a ritual of reversal, in which people who are stratified at the lowest level of society have an opportunity to reverse the hierarchy and symbolically abuse those who are of higher status without fear of retribution—women to men, young to old, low caste to high caste, poor to rich.

The Festival of Colors as it is celebrated in Spanish Fork retains the idea of changing the status quo but achieves this change quite differently than the traditional reversal of hierarchy. This festival breaks down normal barriers by allowing participants to interact with both friends and strangers.

Courtenay Maynes, a senior at Brigham Young University (BYU) from Vancouver, Washington, describes her experience: “As we arrived at the festival, we’d walk past people covered in colors. Random people we didn’t even know were throwing colors at us and hugging us. Once we got to the temple, everyone was dancing and throwing colors at people that walked by. As we saw the ‘clean’ people coming in, we would throw color on them. Everyone interacted with each other even though we each came in our own group.”

The powdered colors conceal aspects of personal identity that might serve to distinguish people from each other. Cori Scott, a BYU student from Hillsboro, Oregon, explains, “You can’t really pick out people. Everyone looks the same, so I wouldn’t be able to recognize my friends afterward unless they said something to me.” Dr. Nuckolls hypothesizes that this process of concealing physical differences esta-blishes commonality among participants.

The Sri Sri Radha Krishna Temple in Spanish Fork, Utah, hosts one of the largest Festival of Colors events in the Western Hemisphere.

Ultimately, the Festival of Colors in Spanish Fork, Utah, has successfully translated many aspects of traditional Holi celebrations. Not only are many of the traditions preserved, but the underlying goal of challenging social hierarchy is also maintained.

The next time you are looking for a socially unifying experience, or perhaps just a way to release your frustration and stress, look no further than Spanish Fork, Utah.