Deep in the Heart of Dallas 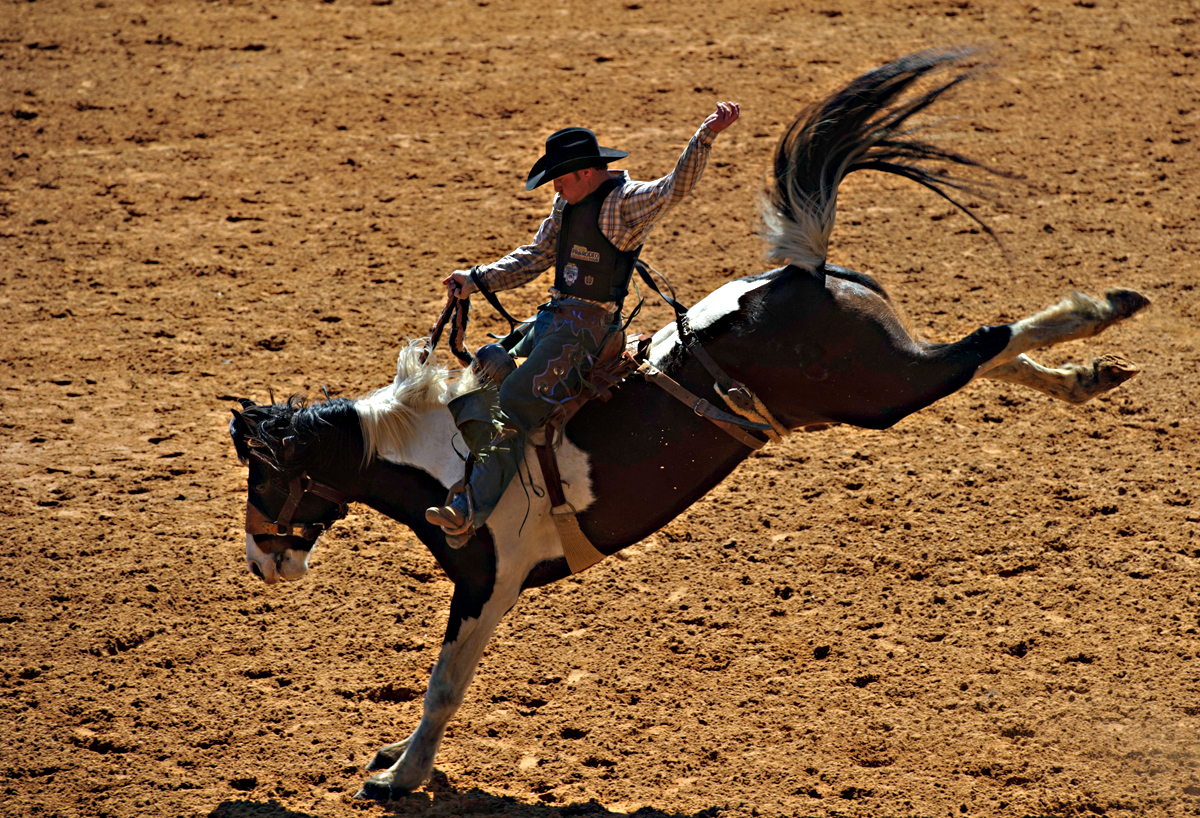 Bronc riding is just one of the exciting events that you can watch at the Mesquite ProRodeo.

The man who walked over to our table was tall. He bent forward, hovering over my newly delivered Texan steak. “I’m putting $20 in the band’s tip jar to see you do the chicken dance.” I was left staring dumbfounded as he walked over to the stage, put in the $20, and made his request to the country band—all before I could utter a response.

When the band began playing the music, I stood nervously. A painfully introverted native of Seattle, I knew I was about to make a fool of myself. It didn’t take long, however, before half of the restaurant guests had joined me on the dance floor in their plaid shirts, leather boots, and cowboy hats—though none of us knew what we were doing. It took most of the song for us to figure out the steps, but it was a fun and hilarious process as we watched each other dance awkwardly out of sync.

That night in Dallas, Texas, I learned what it felt like to bond with a community. The people we meet in the places we visit can be as much of an attraction as the places themselves. As you’re planning your next trip to Dallas, consider visiting the following places for a chance to meet new people, have a good time, and, of course, get a taste of southern hospitality.

That memorable evening of dancing occurred within the walls of Trail Dust, an authentic Texan restaurant. As you walk in, you’ll notice that the walls are covered with the severed neckties of people who have come to Trail Dust expecting to dine formally. If having your tie chopped off doesn’t tell you that this is going to be a “down-home country experience,” seeing a large metal slide going through the middle of the restaurant should give it away.

The live country music, open dance floor, and delicious southern steaks combine to make the perfect Texan dining experience, proving that the only thing bigger than a Texan’s heart is his or her stomach.

With big hearts come big feelings. For most Texans, the symbol or monument that represents the heart and soul of the people is Big Tex. Standing 52 feet tall, Big Tex has been the iconic symbol of the State Fair of Texas since 1952. In October 2012, Big Tex was destroyed by an internal electrical fire, initiating a statewide grieving period. But the Texans did not stay down long. A new and improved Big Tex is already standing, so you can still expect to receive his warm greeting when visiting the fair.

However, Big Tex certainly isn’t the only attraction at the fair. After passing this iconic greeter, you’re sure to notice the Texas Star, one of the tallest Ferris wheels in the nation. It’s a great ride for those who enjoy the thrill of high altitudes or for those who just want a great view of the city.

Afterwards, grab some of the fair’s famous deep-fried food—but don’t limit yourself to fried chicken. At the fair you can try anything deep-fried: deep-fried cotton candy, deep-fried Coke, deep-fried Doritos pizza, deep-fried butter, deep-fried bacon cinnamon rolls, and the list goes on. This interminable number of deep-fried foods owes its variety to the spirit of competition that inspires these crazy but tasty combinations.

After filling your gut with the many manifestations of trans fats, enjoy carnival rides and games, listen to a concert, watch the bird or bike shows, or reignite your creative side with pumpkin carving and face painting. As the largest state fair in the United States, the State Fair of Texas really has it all. It even hosts the rivalry football game between the University of Oklahoma and the University of Texas at Austin.

Plan your trip carefully because the fair is open only during the fall.

Finally, your trip to Dallas wouldn’t be complete without a visit to the Mesquite ProRodeo. There is nothing like sitting up against a rodeo-loving southerner and watching dirt and dung fly into the air as a group of masochistic cowboys are tossed around on hyped-up horses and berserk bulls.

Thankfully, for the faint of heart, this intense display is broken up by shows of brave children clinging to the downy wool of sheep that race around the arena in an event called Mutton Bustin’. You can also see steer wrestling, Dash-For-Cash (where a hoard of children chase after money strapped to a fleeing calf), tie-down roping, and cowgirl barrel racing. The rodeo provides plenty of excitement and entertainment throughout the year, all steeped in the flavor of the South.

Wherever you go in Dallas—whether you are at a restaurant, a rodeo, or on the road asking for directions—you will be treated like family and receive a big sincere dose of southern hospitality. As you go about your travels, enjoying the southern steaks and picturesque sunsets, don’t be afraid to make some new friends and maybe even do the chicken dance.