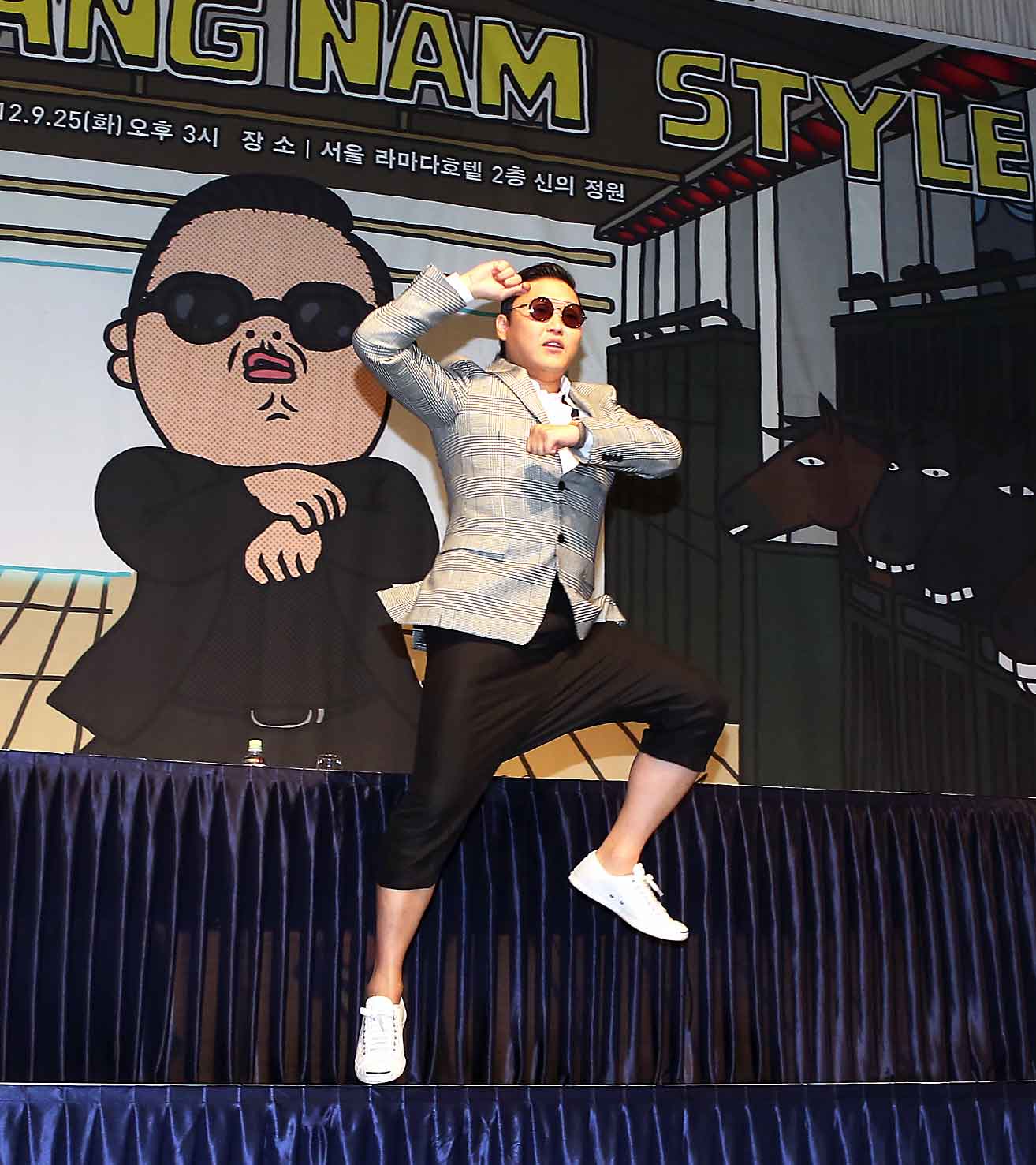 Christina Hall may seem like a typical 20-year-old. After growing up in Lakewood, California, she left home to attend college, where she is working toward a bachelor’s degree in psychology. However, closer inspection of Hall’s life reveals some aspects that aren’t quite as typical. Her ringtone is SHINee’s “Ring Ding Dong.” Pictures of 2PM cover her laptop. She recently started watching “Protect the Boss” starring Choi Kang-hee and Ji Sung. None of these names sound familiar? Perhaps “Gangnam Style” does.

PSY dances at a press conference held in Seoul, Korea.

South Korean rapper and performer PSY (short for psycho) released the song “Gangnam Style” on July 15, 2012. A little more than five months later, the song’s music video made history as the first online video to surpass one billion views.

According to Billboard, “hundreds of thousands of parodies of the video have been uploaded to YouTube,” including a cover video about Mitt Romney. Although the “Psy-nomenon” has led to increased interest in South Korea, most Americans are unaware that the popularity of “Gangnam Style” is only a small part of a worldwide phenomenon known as the Korean Wave.

The term Korean Wave refers to the spread of South Korean pop culture across the world. The Wave spread first to other Asian countries, then to the Middle East, Northern Africa, Latin America, and the United States. According to Dal Yong Jin, a professor in Simon Fraser University’s School of Communication, Korean TV dramas were the first cultural product to achieve this global penetration. Other cultural products—including movies, pop music (known as K-pop), and online games—are following the path paved by Korean dramas.

“The Korean culture is a very different culture,” Hall explains. “The first Korean drama that I saw clearly demonstrated this difference. At first, I thought, ‘This is the weirdest thing I’ve ever seen. Who acts like that?’ But then I wanted to know what happened next—it hooks you.”

Carol Maynes, a 47-year-old mother of three living in Vancouver, Washington, had a similar first reaction. “I was caught off guard by how effeminately the boys were dressed. It took me a while to understand their humor,” says Maynes. “Sometimes the music implied that the scene was intended to be comedic, but I didn’t get what was supposed to be funny. However, once I caught on, I was hooked.”

According to Crystal S. Anderson, director of the Kpop Kollective (a research initiative on the Korean Wave), the Korean culture exhibited in Korean dramas and K-pop is part of their appeal for fans. Dr. Julie Damron, a professor on Brigham Young University’s Korean Faculty, agrees. “They get attached to the dramas, and then they start to like the culture they see,” explains Dr. Damron. “They not only want to learn the language, but they want to go to Korea and to have Korean friends.”

This cultural and linguistic phenomenon is occurring beyond college campuses. According to Dr. Anderson, fans also take Korean language classes through Korean cultural centers and on the Internet.

Carol Maynes’s 14-year-old daughter, Melanie, started taking Korean lessons because she wanted to learn more about the culture she saw in the dramas and to learn the language, which she describes as “really pretty.” She is planning a trip to Korea with her friend after high school graduation and would like to eventually teach English in Korea.

Christina Hall regrets not having time to learn Korean, but her younger sister—whom Hall introduced to Korean dramas—is “dead set on learning Korean.” Hall would love to visit Korea; she jokingly mentions that she might need someone to hold up subtitles, though, so she could understand what everyone is saying. Fans included in research conducted by the Kpop Kollective express similar interest in traveling to Korea.

Although Korean culture may seem alien at first, you shouldn’t dismiss Korean dramas and K-pop before giving them a fair chance. Who knows? Maybe you’ll be in a beginning Korean class next year.