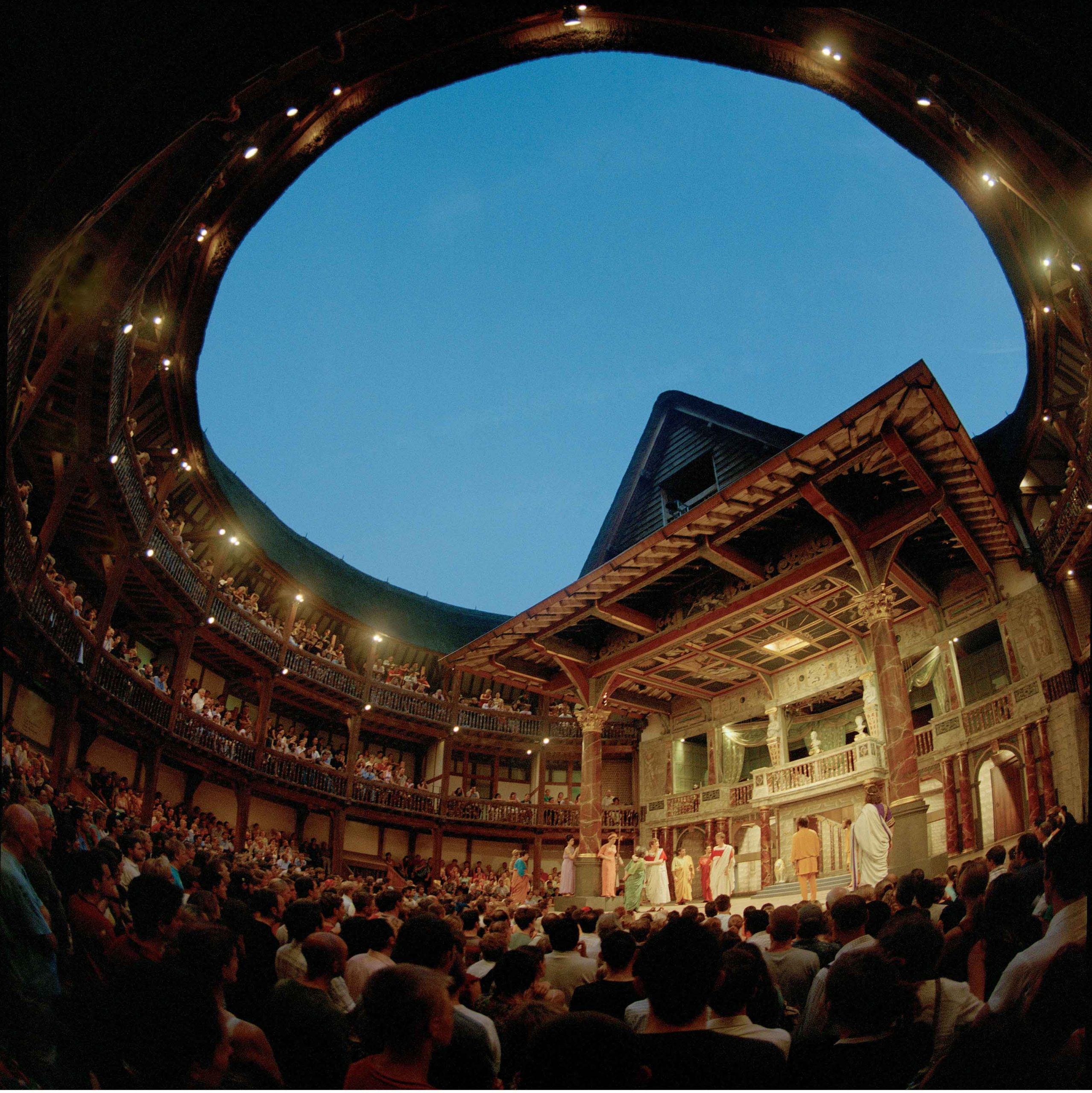 The works of William Shakespeare, the master storyteller, are popular in many languages and countries. Whether the play is in English or in German, whether it is shown under the open summer sky of an amphitheater or within an indoor arena, no theater-goer’s experience is complete without seeing a work of William Shakespeare performed live on a stage. Take a look at a few of the many promising options that are shaking up the world of live theater around the globe.
—Bryce Peterson

A production of Henry VIII at OSF’s Allen Elizabethan Theatre, which epitomizes the “deep thrust” stage style of the Elizabethan era.

Established in 1935, the Oregon Shakespeare Festival (OSF) is the largest and one of the oldest Shakespeare festivals in the United States. The OSF season usually runs from February to November, which is the longest season of any Shakespeare festival, and typically includes 11 productions. Like most festivals, OSF often includes contemporary plays, non-Shakespearean classics, and even musicals.
osfashland.org

The Festival Theatre seats 1,826, but Stratfor’ds state-of-the-art lighting and sound technology ensures that all audience members are included in the performance.

Stratford, Ontario, Canada
The Stratford Festival is probably the most well-known and largest classical repertory theater in North America. Equipped with four theaters ranging in size from 260 seats to 1,826, Stratford Festival puts on about twice as many plays as most other festivals—12 every season (from May through October). There are also many activities hosted by the festival to keep you occupied between performances, such as classes, for various ages and experience levels, on Shakespearean texts and on performance.
stratfordfestival.ca

Neuss, Germany
Near the west bank of the Rhine River in central Germany, the ancient city of Neuss houses the Shakespeare Festival in the Neuss Globe. This theater is a reconstruction of Shakespeare’s Globe, a popular style for many theaters at Shakespeare festivals. The Neuss festival houses many theater companies traveling from all over the world, and the plays are performed in English, German, and a myriad of other languages. Since the season at the Neuss Globe is relatively short (from June to July), plan carefully and book tickets early so you won’t miss out.
shakespeare-festival.de/en

Shakespeare’s Globe, in London, is a reconstruction of the original Globe Theatre established by the Bard himself.

Stratford-upon-Avon and London, England
A great way to make Shakespearean theater feel authentic is to see it at its genesis, its epicenter: good ol’ Bill’s hometown of Stratford-upon-Avon in England. Here, the Royal Shakespeare Company (RSC) houses many productions, from Elizabethan style to the totally modern, in three theaters. A second well-known Shakespearean theater, Shakespeare’s Globe, is a separate theater company located 100 miles away on the River Thames in London. Along with producing Elizabethan-style productions, Shakespeare’s Globe in London also houses international touring productions of Shakespeare in a program cleverly named Globe to Globe.
www.rsc.org.uk
shakespearesglobe.com

Kronborg Castle was Shakespeare’s inspiration for the location of Hamlet.

Kronborg Castle, Elsinore, Denmark
When writing Hamlet, Shakespeare transformed Danish folklore into Renaissance-era tragedy after becoming vicariously acquainted with Kronborg Castle in Denmark in 1586. In other words, the setting of Hamlet was inspired by Kronborg Castle. With a long-standing tradition since 1816, The Shakespeare Festival at Hamlet’s Castle has drawn some of the biggest names in Shakespeare from the last century, such as Kenneth Branagh, Laurence Olivier, and Richard Burton. It continues to draw international audiences, producing most plays in English and some in Scandinavian languages.
www.hamletscenen.dk/uk/

The DBS Arts Centre, located in the heart of Singapore’s entertainment district, seats 380, providing great potential for small to mid-sized performances in an intimate setting.

Merbau Road, Singapore
Nestled in the Asian islands between Malaysia and Australia is the city-state Singapore, which houses the highly reputable Singapore Repertory Theatre (SRT). English is the first official language in this former British colony; as a result, the majority of SRT’s productions are performed in English. Singapore Repertory Theatre has produced high-quality Shakespearean shows for the past two decades, and prolific actors such as Kevin Spacey, Sir Ian McKellen, Ethan Hawke, and Sir Trevor Nunn have performed on SRT’s stage. They host a Shakespeare in the Park series every summer, and their regular season throughout the year boasts original works and tried-and-true classics. Not bad for what some might call a “remote” part of the world.
www.srt.com.sg