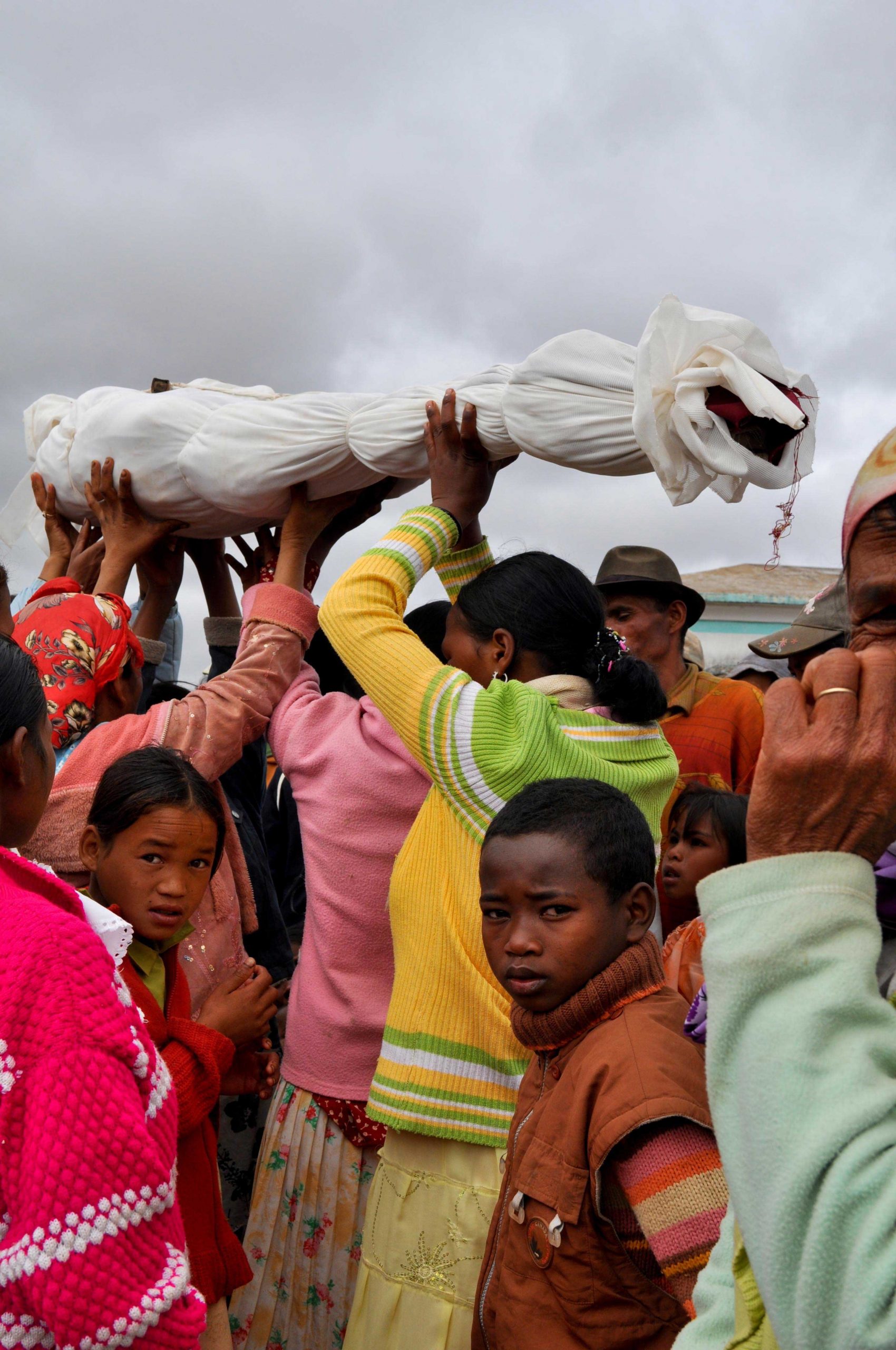 Malagasy carry the body of a deceased relative as they participate in the turning of the bones.

With one final cut into mortar and clay, the crypt falls open, the gathered family watching in near-silence. Tears fill the eyes of some; others have smiles on their faces. Two men disappear into the tomb and return carrying a bundle wrapped in linens. They carry the body of one of the men’s grandmothers.

Loud music begins to play, and tears of sadness turn to tears of joy as families tell stories of their parents and grandparents. Children and adults lovingly stroke the cloth-wrapped bodies of their ancestors and soon begin to dance. The famadihana (pronounced fa-ma-dee-in), or turning of the bones, has commenced.

The grief that comes with the death of a loved one can take many forms. It can be manifest in saying goodbye to the friend or family member or in honoring them in a symbolic and meaningful way. In some cultures, funerals are somber and serious. But other cultures—such as that of the Malagasy, the people of Madagascar—have traditions rooted in celebration and rejoicing.

Madagascar, an island country located in the Indian Ocean off the coast of southeastern Africa, is home to more than 22 million people. Nearly 90% of its people live on less than two US dollars a day, and poverty and heartbreak are everywhere. Orphaned children wander the streets barefoot and hungry, carrying all their possessions on their backs. Families of 10 or 12 people live in one-room homes with dirt floors and no electricity or running water. Work is hard to come by, and many parents struggle to feed their children. But there is also great beauty in the cultural traditions found amidst these harsh realities of everyday life.

A mother and son take a short reprieve from their endless daily chores.

The Malagasy are a people deeply rooted in tradition and culture. The family is very important and is traditionally made up of more than just the father, mother, and children. Aunts, uncles, nieces, and nephews are also part of the main family body and play a vital role in family life. Younger generations show great respect for their elders, and this honor and veneration extends to the deceased.

Cultures all over the world differ greatly in beliefs about death and what happens after a loved one dies. These cultural beliefs can greatly impact all aspects of life. Traditionally, Malagasy believe in God—once called Zanahary (pronounced za-na-ha-ree), or Creator. Their God is now called Andriamanitra (pronounced an-gee-a-manch), meaning sweet or fragrant Lord. Ziva Rakotondrasoa (pronounced Ra-koo-toon-jra-soo-a), a Madagascar native, says of his culture, “Malagasy believe that our souls live after death, and we believe a life is a gift from God. We do believe that if a loved one dies, he or she still lives on the other side.”

For Malagasy, close familial ties continue even when a loved one has passed on. Sometimes described as gods on earth, the dead play an important part in the daily life of their descendants. They are seen as intermediaries between God and the living, and as such have the power to impact the circumstances of the living for better or for worse. The respect Malagasy feel for their ancestors, combined with their desire to remain in good standing with their gods on earth, makes up the foundation for the way they continue to honor their ancestors after death.

The Malagasy honor their ancestors in a traditional burial ritual called a famadihana, or the turning of the bones. Every five to seven years, people reopen their family’s tombs and carry out the wrapped remains of their ancestors. They rewrap the dead in fresh shrouds and then dance around the tombs to live music, holding their ancestors above their shoulders.

“I went with my family and did a famadihana,” Rakotondrasoa explains. “We wrapped the body of my grandma. Usually the event lasts two days. It can be more, depending on the area. The first day is a day to clean the surrounding of the graveyard. There is a party at night. The second day, we feed guests with vary be menaka (rice and pork). We dance. From the ancestor’s old house, we dance on the road and hold the shroud and mats we are going to use to put the body on after we take them out from the grave.”

Rakotondrasoa also states that the event is light and joyous. Although those in attendance weep when the grave is opened, the overall feel of the ceremony is that of a celebration. After the remains of the dead are wrapped in new linens, loud music plays, and all family members dance seven times around the grave.

To some, this practice might seem macabre, but for the Malagasy, it is a meaningful and symbolic way to honor those who have gone before them. Families from different parts of the country get together and tell stories about the ancestors whose remains are lying before them. Tears are discouraged, and the event is happy and joyous rather than somber or solemn. Relationships among the living are strengthened as family members see each other again for the first time in years. They smile and laugh as they reminisce and speak lovingly about their dead.

Family ties, both past and present, are important to the Malagasy people.

As the dancing dies down and the music stops, the freshly wrapped bodies are returned to their resting places. Loved ones among the living carefully place them in the crypts, and the tombs are once again sealed, not to be opened for another five to seven years. It is with peace and a newfound respect in their hearts that the Malagasy again say goodbye to their deceased relatives.

“I respect my loved ones,” Rakotondrasoa concludes. “I know I will meet them once again, so I want to show to them that they are still remembered once they are gone.”