Heritage Hunting in the Highlands 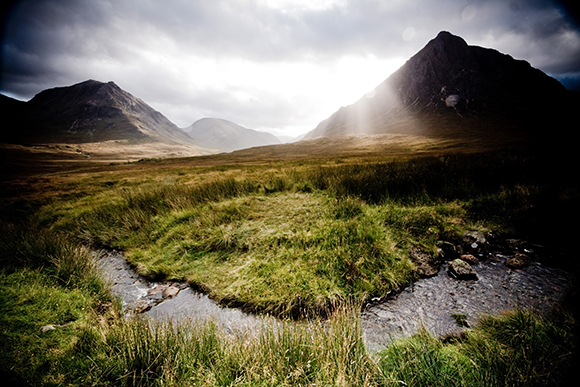 The volcanic glen known as Glen Coe is considered one of the most spectacular views in Scotland.

An angry clansman clad in highlander garb charged right at me. I was standing in the middle of the four-walled theater at Culloden Battlefield museum, watching a reenactment of the gruesome battle unfold before me. Jacobite clansmen beat their chests and rallied for their country. Then British soldiers annihilated the clansmen with cannons and other advanced weapons. I couldn’t help but feel a little emotional; after all, these actors were representing my ancestors who had fought in this battle for the rights to their native land.

Before I actually traveled to Scotland, I had grand fantasies about what it would be like to explore the country of my ancestry: to see misty mountains dotted with purple heather, to visit deep and expansive lochs, to hear enough bagpipe music to fill my little Scottish soul. Luckily, I did have all of these stereotypical Scottish experiences. But what I didn’t count on was finding myself in the history of the Scots.

Standing on the battlements of Stirling Castle, I listened as our guide pointed out the surrounding landscape. To our right was the National Wallace Monument, an ancient-looking relic that bursts upward from the trees in honor of Sir William Wallace. The guide gave us an in-depth look at the workings of the castle, including the Great Hall, the kitchens, and the living quarters. All of this information was interesting and informative, but I wanted to know more.

After the tour, I asked our guide if he had heard of George Buchanan, one of my ancestors who—I was fairly certain—had lived at the castle. The guide confirmed that George Buchanan had been the widely respected tutor of Mary Queen of Scots and her son, James VI, and that he had indeed lived at the castle in the mid-1500s. Then the guide pointed out a classroom where my ancestor would have taught and told me stories about him that only seasoned tour guides could know.

I realized that because of my ancestry I was part of this castle, part of this land, and part of Scotland’s history. This moment of discovery meant more to me than any other fact or statistic I had heard on the tour. But another moment of discovery was waiting for me: I visited the museum near the battlefield and saw the Battle of Culloden unfold before me.

This marker memorializes the highlanders who fought for the rights to their homeland. Travelers can walk the battlefield and see markers of individual clan graves.

As I exited the theater, I looked up and saw a memorial with the names of all the clan leaders who had fought in that battle in 1746. That’s where I saw the name of Robert Buchanan, another of the patriarchs of my family’s clan. It hit me at that moment that I was part of his legacy too—and that returning to this place had become a mark of patronage and a sacred honor that I was privileged to experience.

A line of blue flags marks the line where the Jacobites would have been when the Battle of Culloden started.

As I walked around the grounds of the battlefield, I silently paid respect to the members of my clan who had loved their land enough to fight for it, even at the expense of their lives.

Personal history invites us to explore a land in the context of its people and to connect with the land in deeply meaningful ways. Learning about the souls who built, worked for, and fought for my homeland gave me access to intimate relationships with the physical landscapes, relationships fostered by familial bonds.

Traveling to Scotland made me see that while time, society, and culture soldier on, the land preserves much of the history that is carved into it. It is our privilege to draw out these histories from the landscape, thereby enabling us to better write our own history.

At the end of my trip, I found a shop that made clan tartans and kilts, and I purchased a wool blanket in the Buchanan plaid. This blanket reminds me of the relationships I created through uncovering the history of my ancestors’ sacrifices. And it encourages me to pass on the stories I found and thereby honor the surname that I bear.