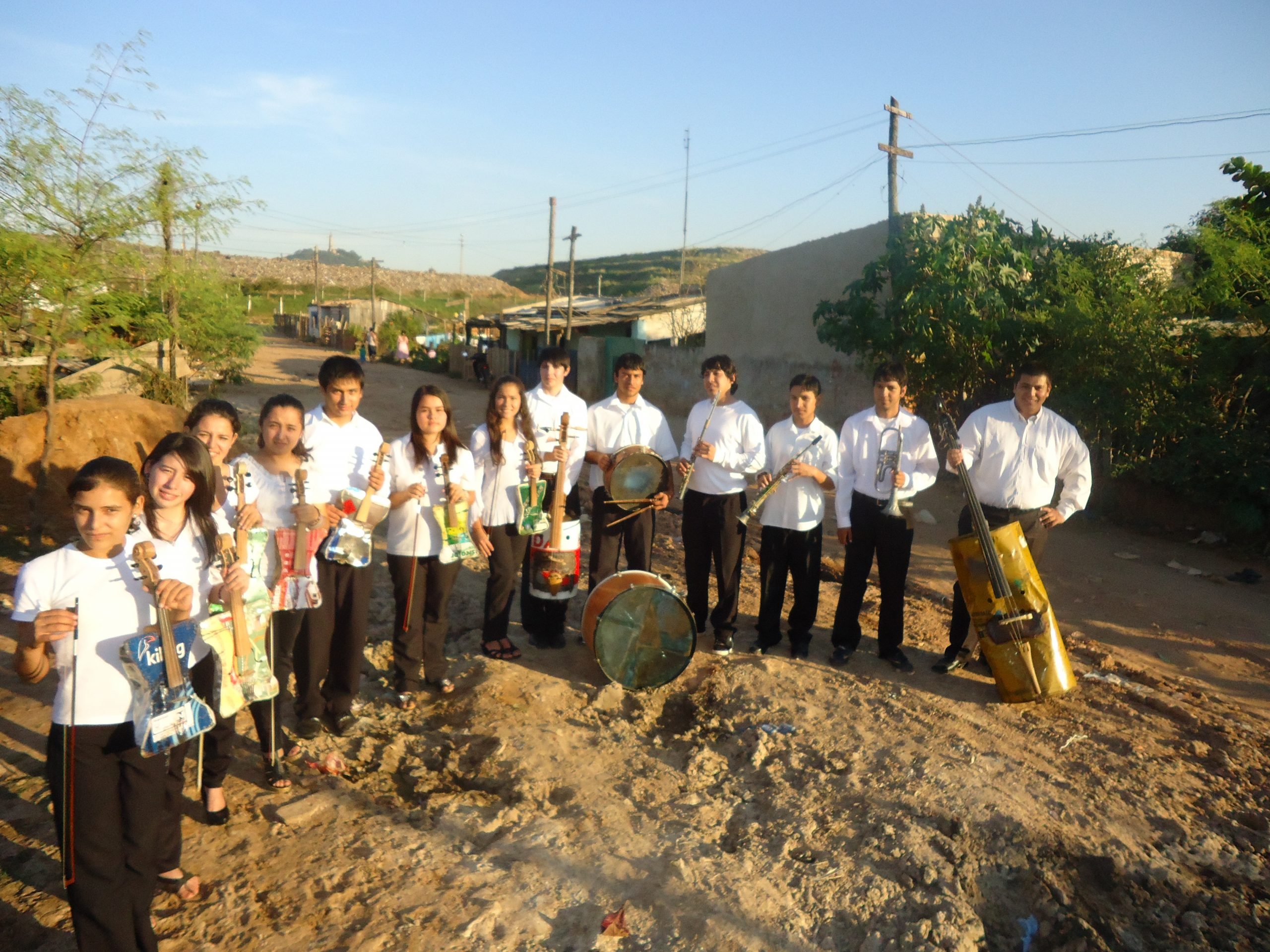 Cateura, one of the poorest cities in Paraguay, is ruled by its enormous landfill. Nearly everyone who calls this small town home works at the landfill and lives in a shack made from corrugated metal and scrap wood that were found among the garbage. Over the years, ton after ton of solid waste flowed down from the capital city, Asunción, to the landfill here in Cateura. Because the people had no place to dispose of their own garbage, the trash piled high in the city and filled the lagoon, leaving the land and the water polluted and unsanitary.

But out of the piles of trash and the ramshackle buildings comes the melody of Beethoven’s Ninth Symphony. This unexpected, beautiful sound of violins and cellos drifts across the landfill.

The majority of Cateura’s youth join their neighbors in working at the landfill. These youth must sort through the 1500 tons of waste that arrives in the landfill every day. This job often keeps teenagers out of school—and thereby hinders the possibility of a better future.

In this difficult situation, the youth are at high risk for using drugs and joining gangs; one young girl attributes her peers’ lack of study time to drug and alcohol addiction. With no education, no wholesome activities, and no hope for the future, the children of Cateura have almost no choice but to remain there, living out their lives confined to the landfill.

Nicolas “Cola” Gomez holds a cello made from scraps of garbage.
Photo by Landfill Harmonic

But one man refused to let the Cateura youth succumb to this fate. In April 2009, Favio Chávez, a music teacher, committed to engage his students in something positive by teaching them to play musical instruments. Luis Szarán, director of a nonprofit organization that establishes music programs in poor areas, aided the cause as well.

Since an average violin is worth more than each student’s house, Chávez let the kids play with instruments from his own collection. But the number of students interested in playing surpassed all of Chávez’s expectations: the kids loved to make music. “When I listen to the sound of a violin, I feel butterflies in my stomach,” says 13-year-old Ada Bordados. “It’s a feeling I don’t know how to explain.” With excitement like this coming from many of the city’s youth, soon there were not enough instruments for everyone who wanted to learn. With only five instruments to share among them, the aspiring musicians grew bored. It seemed that the music school would not prove successful. But Chávez didn’t give up.

The landfill workers often sort through the trash to look for anything of value to sell. One of these workers, Nicolas Gomez, can make almost anything out of the items he finds in the landfill. One day, he came across the battered husk of a violin, and an idea was born. After that day, Chávez recruited Gomez to build drums, cellos, violins, saxophones, and more for the music school. Gomez used anything and everything he could find in the trash—bottle caps, old x-rays, canisters, metal bowls, forks, jelly cans, scrap metal, and other such rubbish.

Today, a 19-year-old boy named Juan Manuel Chávez plays a cello made from old oil cans, discarded pieces of wood, and a fork that connects the strings. The tuning pegs are made of pieces from a meat tenderizer and an old gnocchi maker. Szarán explains, “People say, ‘This is something I threw away because it was useless.’ But when they see us, they see the same useless materials being transformed into musical instruments.”

As word of the Recycled Orchestra spread across cities, regions, and countries, they began performing in various cities in their home country of Paraguay. Eventually they received the opportunity to play in several other South American countries, including Brazil, Argentina, and Colombia.

The students, most of which had rarely left the borders of Cateura, reveled at the prospect of traveling beyond the landfill. The luxuriousness of these foreign locations contrasted greatly with Cateura’s poor and polluted atmosphere. The young performers stayed in grand hotels instead of the small wooden shacks they were accustomed to; they swam in the sky-blue waters at Rio de Janeiro, something they would never dream of doing in the contaminated streams of their hometown.

Learning to play and make instruments and traveling to share their talents with others, these students have genuinely dedicated their lives to their art, and that dedication has paid off exponentially. The members of the orchestra have inspired each other to value their own lives more. “The music will help some not to start with drugs or other addictions,” says one young musician. “Let the music be your addiction.”

A young musician holds a drum made from discarded x-ray
photographs.
Photo by Landfill Harmonic

Another young girl adds, “My life would be worthless without music.”

Slate reporter David Haglund shares how moving the transformation in these young people is: “If you do not lose it a little when 19-year-old Juan Manuel Chávez starts playing Bach’s Cello Suite no. 1 on an instrument ‘made from an oil can and wood that was thrown away in the garbage,’ then you are made of sterner stuff than I.”

The original students who first attended Favio Chávez’s music classes have gone on to pursue other dreams, but their legacy continues as curious new students join the orchestra to discover the magic of music. These students have proven that people can make the most out of what life hands them—even if it’s garbage. “The world sends us garbage,” says Chávez. “We send back music.”

The story of the Recycled Orchestra is currently being made into a feature-length documentary, Landfill Harmonic, to be released in 2014. The directors hope to show how important it is that the formerly hopeless children have undergone a kind of metamorphosis; these neglected Paraguayan citizens have been carefully polished and fine-tuned into something beautiful, just like the trash they’ve used to create the instruments they play.