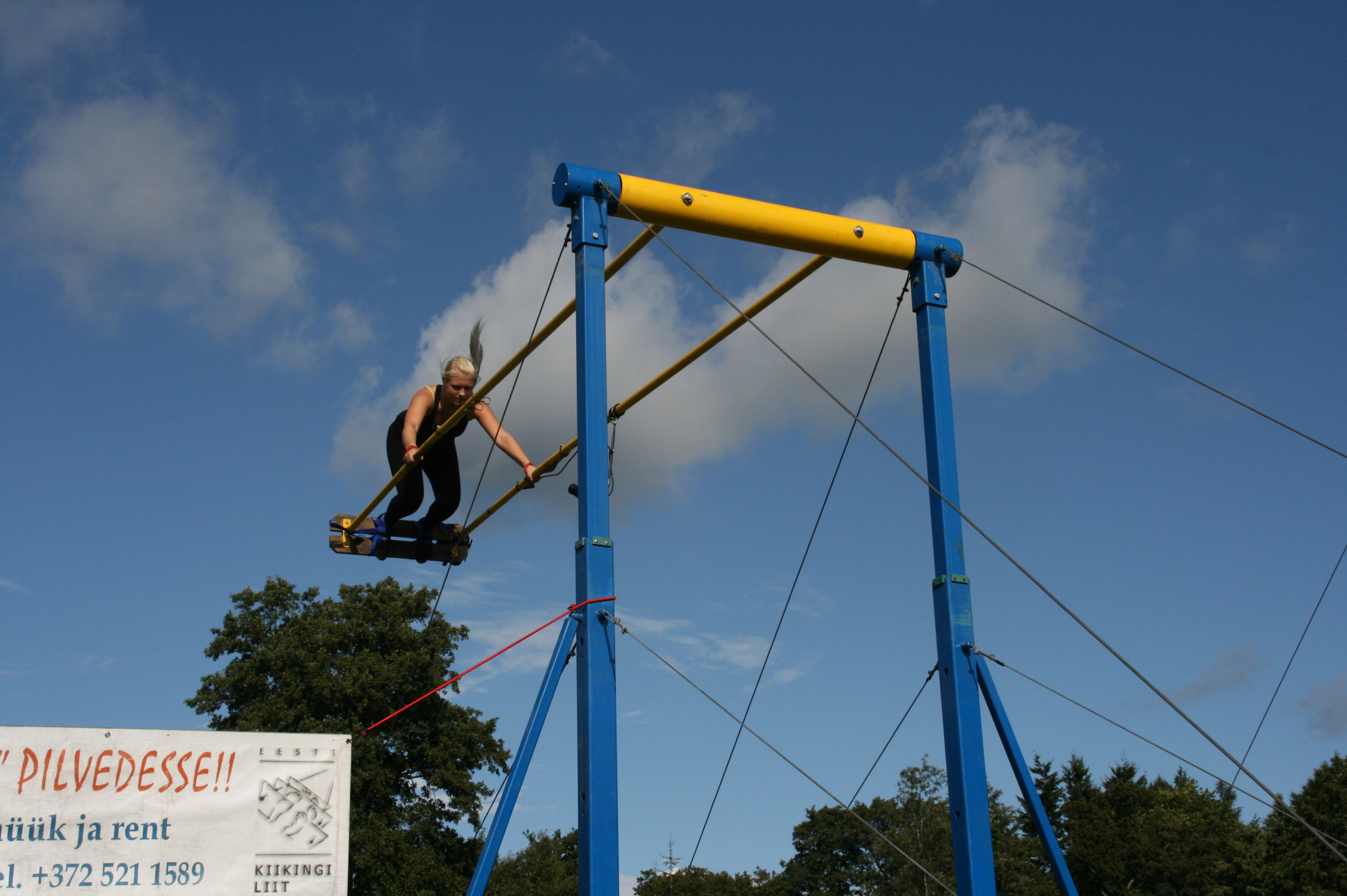 Raili builds up momentum as she prepares to kiik.

Every child dreams of defying gravity by swinging 360 degrees around the spindle of a swing set. In 1996, Estonian engineer Ado Kosk made this dream a reality. Kosk adapted Estonia’s traditional swings, which have wooden shafts rather than chains. Kosk’s version had adjustable steel poles and foot straps to hold swingers in place while they fly in a full loop around the top of the frame. His adaptation ushered in kiiking (pronounced keeking), an extreme sport in which competitors swing around the spindle at increasing levels of difficulty.

Twenty-year-old Raili Laansalu, a native Estonian and veteran kiiker, says, “When you are standing upside down and looking at the ground and all around you—and you know that you cannot fall down—well, it feels like you are between heaven and ground. I have never felt anything like that anywhere.” Despite her busy life as a student, Laansalu competes in several kiiking competitions every year.

Kiiking swings have adjustable shafts and posts, allowing riders to choose the level of difficulty each time they swing. The longer the shafts are, the more difficult it is to swing over the spindle. Once the height is set, riders strap their feet to the seat of the swing and begin to pump by alternately squatting and standing. As the riders build momentum, their own weight pulls them back and forth, then up and around the spindle.

Extreme athletes in annual competitions must complete a 360-degree swing in less than five minutes, with the length of the shafts extended before each round. Each competitor has only one shot at each shaft height, and the competitor who completes a swing with the shafts at the longest setting wins. Outdoor competitions usually take place during the summer in Estonia and across Eastern Europe, but many countries have built indoor facilities to host kiiking competitions all year long. And, best of all, the competitions are open to anyone with the guts to compete.

Kiikers experience a feeling akin to flying as they swing over the top of the spindle.
Photo by Raili Laansalu

Laansalu completed her first circle around the spindle in 2002 on a kiiking swing that her father bought on a whim in 2001. “At first it was really scary,” she explains, “but the feeling gets better every time.” Laansalu and her brother could not make it all the way around the spindle the first time they tried kiiking. “We kind of gave up,” she says. But they tried a year later, with better results. “We all managed to get over the spindle,” Laansalu recalls. “I guess that was the beginning of our fascination with this sport.”

While people in many countries participate in kiiking, it is a distinctly Estonian sport. Kiik means “swing” in Estonian, and Estonian village squares always feature large wooden swings that carry anywhere from two to ten people. Traditionally, the back-and-forth, give-and-take motion of the swing represents the rhythm of the swingers’ relationship. Today, these village swings stand as a reminder of a deep-rooted Estonian tradition.

Swinging is part of Estonia’s beloved past, and kiiking is part of the nation’s promising future—a discovery they will share with the world. But, as any hard-core kiiker can tell you, swinging doesn’t become kiiking until your feet are above your head. And when that happens, according to Laansalu, “the feeling is pretty amazing.”