A Hobbit’s Journey in New Zealand 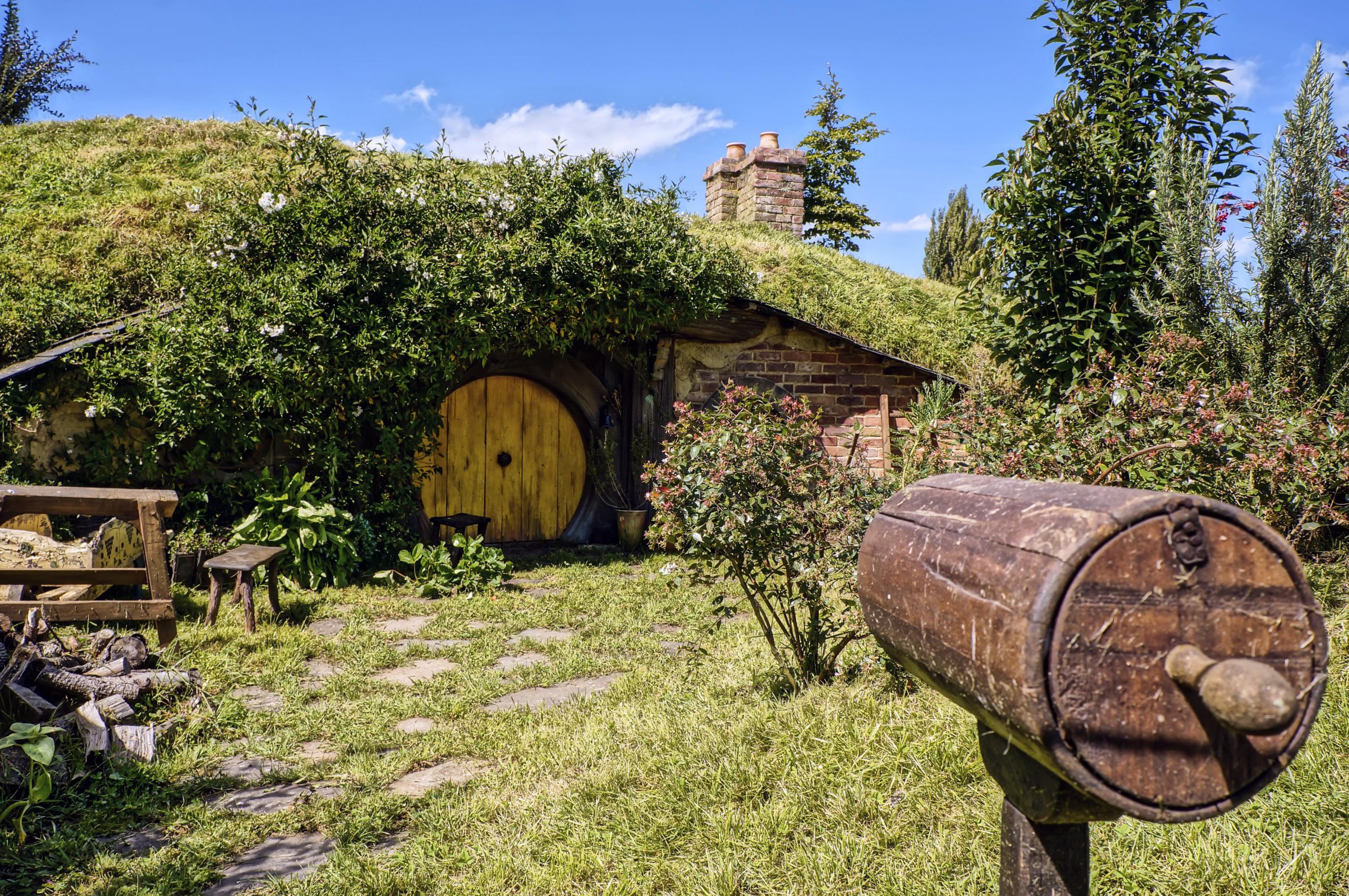 This hobbit house is one of many spots in New Zealand where visitors can live the magic of The Lord of the Rings.
Photo by Hans-Juergen Janisch

In the recent film adaption of The Hobbit, Bilbo Baggins asks Gandalf the Gray to promise they will return alive from their dangerous quest. Gandalf’s response? “No. And if you do, you will not be the same.”

Though Gandalf isn’t around to give travelers such wise responses, they will also experience such a change when they visit the only country that stamps your passport with “Welcome to Middle Earth.”

New Zealand—“Best Supporting Country”—is home to all four of Peter Jackson’s Lord of the Rings movies. Now a landmark for all things Middle-Earthian, New Zealand combines fantastic sites with Tolkien lore in the main attraction for “Ringers.” A permanent Middle Earth location in Matamata, New Zealand, Hobbiton is the best film location to visit, according to Ian Brodie, author of Lord of the Rings Location Guidebook and soon-to-be-released The Hobbit Location Guidebook.

“Hobbiton is the only location that still looks the same as it did in the movies,” says Brodie. “All the rest, you simply go to the locations and you just have to imagine what was there for the film, no different to what we did before the films came along.”

Jackson discovered the perfect place for Hobbiton in what was originally the Alexander family farm. The land had all the necessary traits—the rolling hills, the picturesque lake, and Bilbo’s party tree. On the Alexander Farm, Hobbiton has been rebuilt permanently as a site featuring 44 hobbit holes as well as the Green Dragon, a local hobbit pub that caters to appetites ranging from hobbit- to Gandalf-sized. If you want a tour, guides will take you through the Shire. Complete with lush gardens—that Samwise might have trimmed himself—and with round, colorful hobbit doors, Hobbiton transports you directly into Tolkien’s mind, a place you’ll never want to leave. Watch—Frodo, Sam, Merry, and Pippin might burst from around a corner at any time, ready for Elevensies, Noon Tea, or Second Breakfast.

Brodie, who authored his Guidebook while working for Hobbiton Tours, always felt that his native New Zealand was, in fact, Middle Earth: “Although the names for the locations my parents and I were visiting were New Zealand names, I was actually translating them into Middle Earth names. It was immediately apparent that those mountains could be the Misty Mountains. I was actually imagining in my mind the places I was really seeing put into Tolkien’s books.”

Though Hobbiton is a precious location, many come not simply for the location but also for the journey. As Bilbo Baggins says, “It’s a dangerous business, going out your door. You step onto the road, and if you don’t keep your feet, there’s no telling where you might be swept off to.”

“I will take the ring to Mordor!”

Just as Bilbo was swept off to adventure, far from home and family, two members of Texas-based Rooster Teeth Productions—Kerry Shawcross and Chris Demarais—swept themselves onto a journey to recreate Frodo and Sam’s part in The Fellowship of the Rings. Hoping to create a video series reenacting Frodo and Sam’s journey to destroy “The One Ring”—walking from the film location of Hobbiton to the film location of Mount Doom (Mount Ngauruhoe)—Demarais and Shawcross began their journey with the help of Nick Newton, a guide much friendlier than Sméagol. Though Shawcross and Demarais’s adventure started at Rooster Teeth’s home base in Austin, Texas, it was only when they reached Hobbiton that they realized exactly what they had gotten themselves into: 131 miles of walking in six days.

Despite the intensity of the journey Newton had mapped out, Demarais and Shawcross wore hobbit costumes the entire way: Shawcross toted the ring around his neck, and Demarais stabbed the plastic replica of Sting into any Orcs (or cows) that came between them and Mordor. And besides, Demarais says, without the costumes they “would have just looked like homeless people, not like homeless hobbits.”

Homeless hobbits or not, in the end, cows and Orcs weren’t the problem. “In watching the movies,” Demarais says, “you see [Frodo] being dramatic, ‘Oh, Sam, I can’t go any further,’ and you just think, ‘Come on, you’ve just been walking!’ But going up the mountain, at that point we had been going for so long that physically our bodies were stopping. There were several times where the muscles in my leg cramped up and I literally couldn’t walk.” It was then, Demarais said, that he really connected with both Frodo’s and Sam’s journey. So far away from anything recognizable, least of all their homes, Demarais and Shawcross began to feel like the hobbits that started Tolkien’s Fellowship journey. “It definitely sunk in that the journey would have been much worse than it seems in the movie,” Demarais says.

Despite the toll the long hike took on their bodies—including blisters that covered Newton’s, Demarais’s, and Shawcross’s “hobbit feet”—both Shawcross and Demarais agreed that the New Zealand landscape was the most surreal part about their journey. “Just walking on the road was beautiful,” says Demarais. Shawcross recommends the Waikato River Trails, which they took for about half of their 131-mile journey.

After burying the ring in the fiery depths of Mount Doom, Demarais expressed how it felt to finish their quest: “Like seven days or even three days prior, to me it was like we were doing this thing, we’re making a video series out of it, it’ll be awesome, and I like Lord of the Rings. But actually getting there and finishing . . . it was way more emotional.” Demarais and Shawcross concluded their journey and returned home, but not without realizing that, as Gandalf notes, “Hobbits really are amazing creatures.”

Olo, Beri, and Toad (aka Mitchell Stevens, Jonathan Wright, and John Storey) are would-be hobbits who campaigned tirelessly to be cast as extras in Peter Jackson’s Hobbit trilogy. They are creating a documentary about their journey.
Photo by Jonathan Wright

Just as Frodo told Sam to leave him and “go home,” three additional hobbits named Olo, Beri, and Toad were beckoned home to the Shire by the start of Jackson’s filming of The Hobbit. These advertising students from Brigham Young University—Mitchell Stevens, John Wright, and John Storey—started their journey in Provo, Utah. Their end goal was to capture the attention of Jackson and become extras in The Hobbit films.

These three would-be hobbits made a pact to participate in this journey when a speaker at BYU inspired them. “He basically said don’t wait for big things to come; go out and make it happen,” says Stevens. “John and I talked after the presentation: we need to do something cool, and we need to do something huge. Just as chance would have it, John was watching The Lord of the Rings extended editions, and it just clicked for him: ‘What if we tried to be in The Hobbit?’”

After creating videos directed at Justin Bieber, Ellen Degeneres, and Steven Colbert, and starting several campaigns like CARP-ing (Congress Acting like Ridiculous Politicians) outside Steven Colbert’s studio, walking barefoot for Frodo and Bilbo’s birthday, and winning BYU’s Dining with the Dean culinary competition by creating a hobbit-inspired meal, these three “Road to the Shire” hobbits gained the funds to go to New Zealand.

“We had several people reach out to us on our blog and offer to have us stay with them,” says Stevens. “We didn’t have to pay for lodging at all. And Escape Van Rentals gave us a van to live out of for the two weeks we were there.” Stevens and his fellow hobbits are creating a documentary of their journey, and while they are keeping the outcome of their final trip to New Zealand a mystery, Stevens emphasizes the emotional effect the journey had on him. After having this experience, “I feel like I can really connect with the lifestyle that they live, that Tolkien created,” says Stevens. “Hobbits are very easy-going, they love to eat, they love to have company and have friends. I realized that the more that I let myself believe that I was actually living that, the better the experience was.”

“Not the hobbit that you were”

Through both of these journeys by the Rooster Teeth comedians and the BYU advertising students, these hobbits realized something larger than simply the connection forged between New Zealand and Tolkien’s Lord of the Rings epic. Each learned what it was like to take a walk in Frodo’s feet. After all of his experiences with the Lord of the Rings stories, says Brodie, “they’ve only gained depth and, no pun intended, they’ve gained three dimensions. It certainly hasn’t diminished my love. If anything, the experiences have increased my love because of that indelible link to New Zealand.”